Listen to our interview at AM580 with Colleen Wares! --  Read the history behind the Leland Report Book
Read the latest stories from the road by Jim Burnham
Report #4078 Photo: LR-12-20-2020 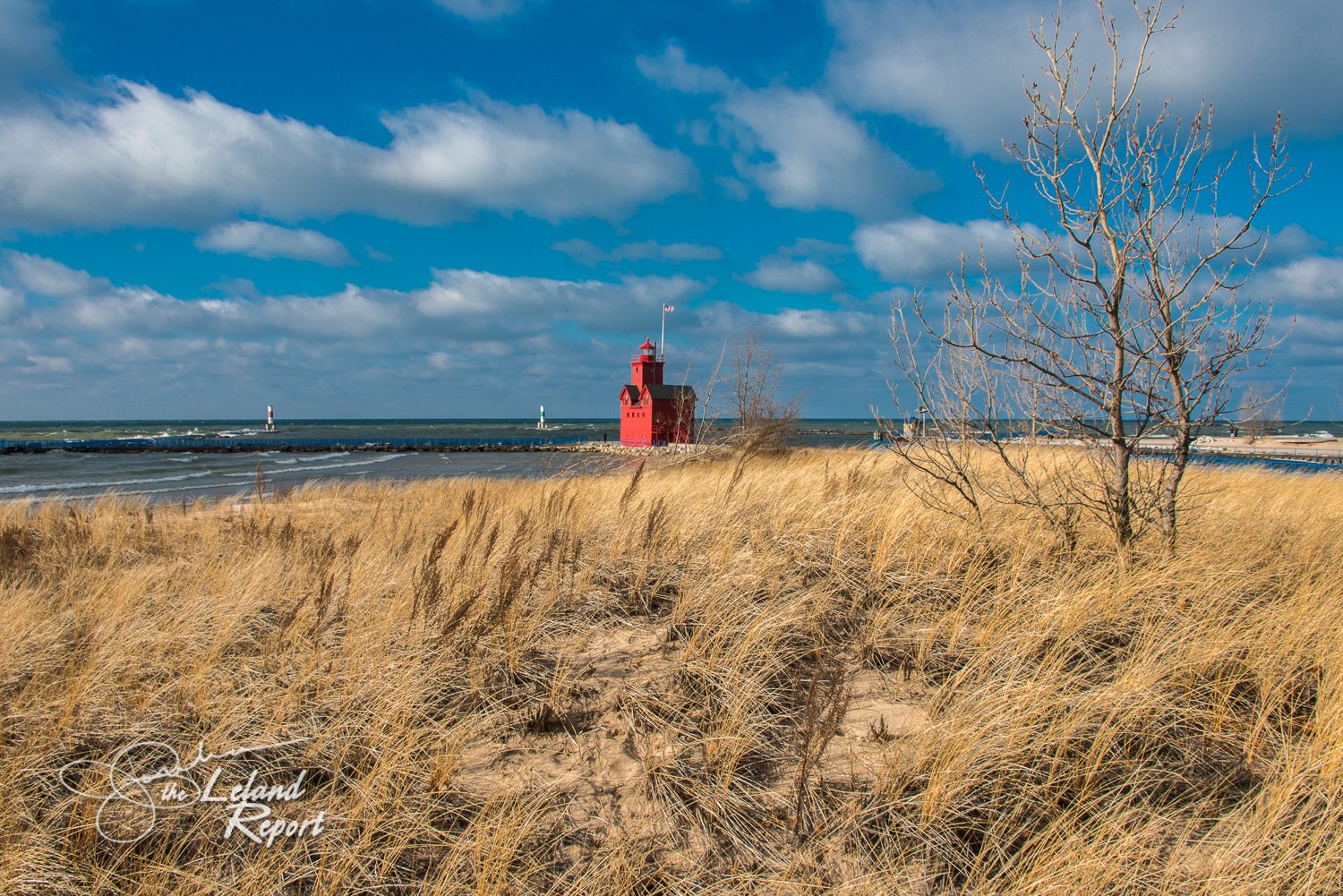 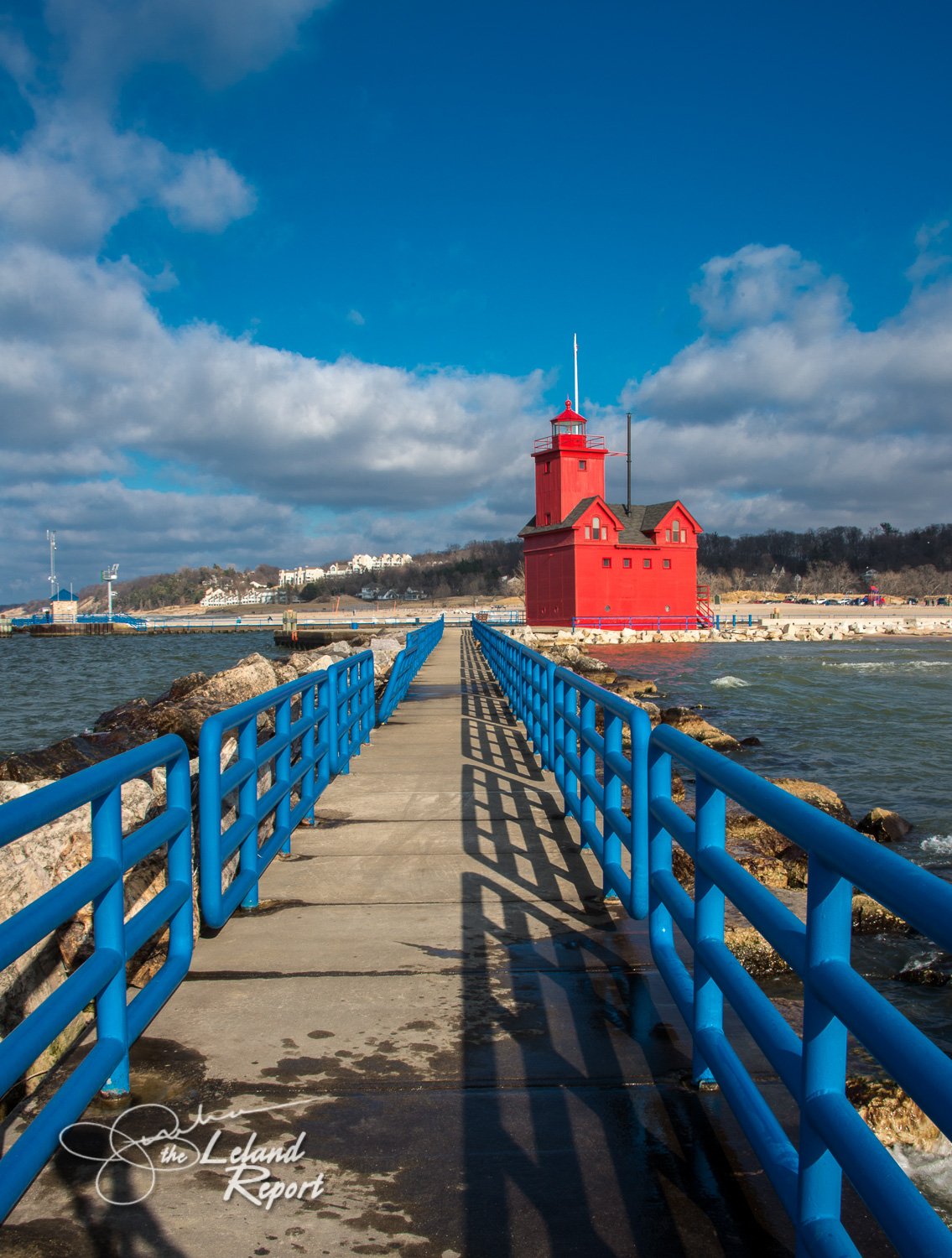 (Report by Jim)
For several years, I have been driving up to Leland every month. If the weather is right and I have nice puffy white clouds, I’ll stop at various lighthouses up the coast. One of my favorites is the Big Red Lighthouse in Holland. It has become more and more restricted over the years, as private residences have clogged the access path to the light, and is now only open to the public Tuesdays and Thursdays, not really convenient for any weekenders like myself (probably deliberately). I have usually walked in with no problem and no questions, except once where I had to sweet talk the gatehouse attendant.

But I doubt I’ll return again unless I hike up from Saugatuck Dunes State Park three miles down the shore. COVID and high water have allowed the residents there to close public access permanently as long as water remains high, and only keep it open for limited access on Tuesdays and Thursdays when water levels are lower. So, yes, technically I was trespassing. You can shame me if you want, but this was probably my last visit there, it’s just too much trouble now. Instead, I’ll stick with the more accessible lights in Grand Haven, Manistee, Muskegon, Ludington, Empire, and Leelanau State Park (or should I say, ALL of the other lights).

In researching the history of that side of the Holland channel, I found that there was never any public access to the beach on that side since it was acquired from the Native Americans in 1821 and platted as a private “pleasure resort” in 1881. No public roads were built and it’s always been private. The Tuesday and Thursday access seems to have been a compromise with the property owners because of the sheer amount of public traffic through the area. Unrestricted public access has always been the goal for the city, but at this point in time, it is still limited. Seems that for the last couple years I have been poking at a century old conflict!

It was much easier to get to Saugatuck Dunes Beach, as it was for this couple who were enjoying the brisk onshore breeze. 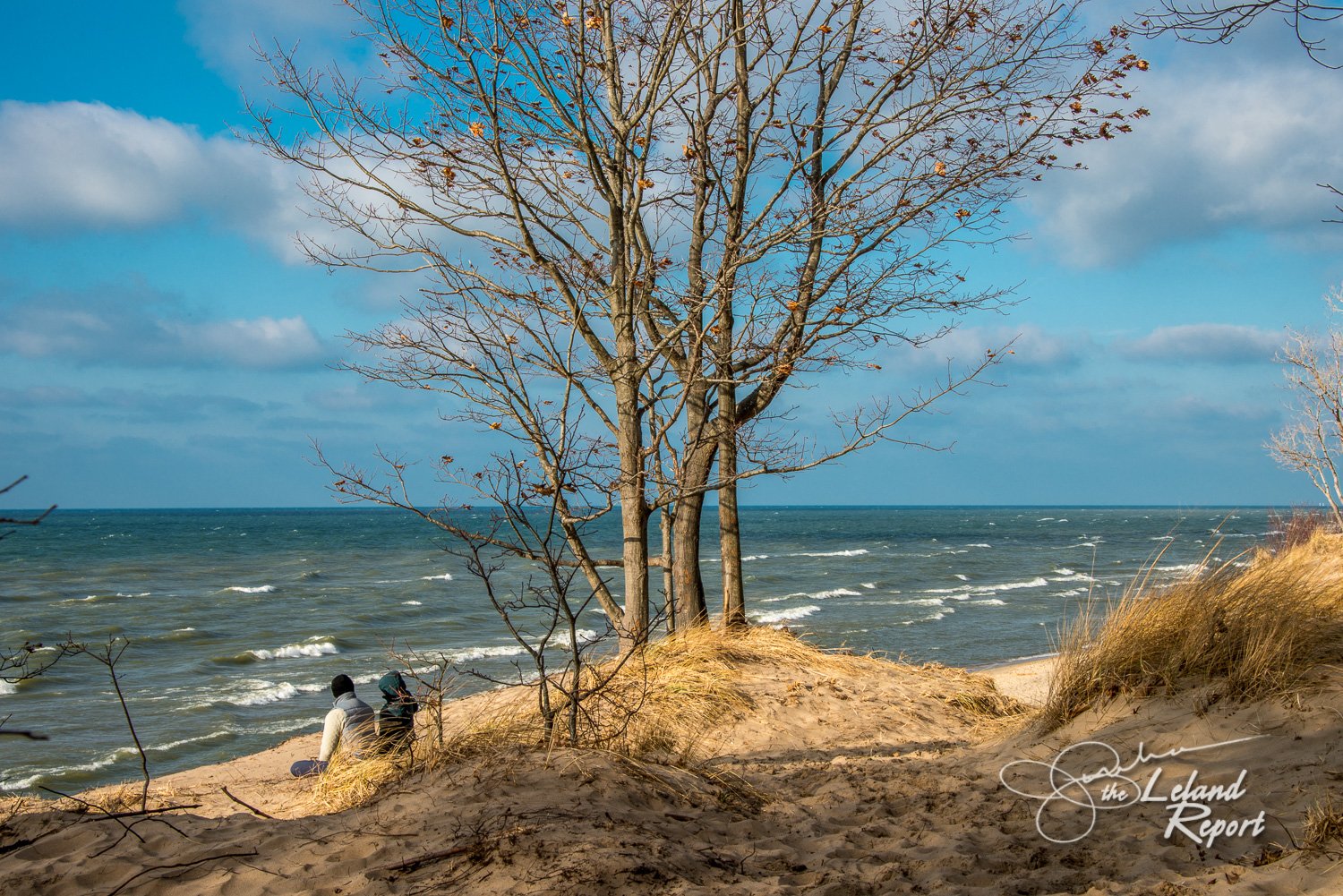 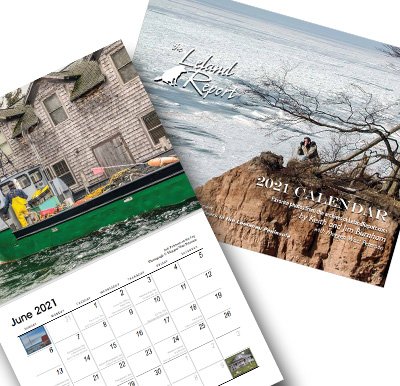 The Leland Report 2021 Calendar is shipping now, get them while they last!

Get your 2021 Leland Report Calendar!

Wonder why it was painted red.

I wondered the same thing – anybody with an answer?

The color of a lighthouse is called the “daymark”. It is identifiable by it’s light at night, but during the day, it can only be identified by color and shape, so it is painted to stand out. Red is used a lot by the Dutch, and since this is Holland, MI, well… 🙂 Also, it is on the starbord (red) side of the entrance, that could also be helpful to boats entering port. “Red, Right, Returning”!

Please know that you are always welcome in our fair city; Saint Joseph, MI. From Labor Day until Memorial Day you can walk out the pier or take in the double lights without even paying for parking. Thank you for all that you continue to do and Happy Holidys to all the Burnham clan.

Thank you for the reminder!