The Leland Report started 2001 as a family email. By March 2001, it migrated to the internet as a way the Burnhams in Leland could communicate with their children across the country. As more people requested a link to the site, we gave you a voice with the ability to leave your own comments. Since 2001, the Leland Report has been a photo-a-day, every day, with very few missed. 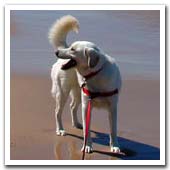 Biscuit is living the good life in Northern Michigan. He is the brains behind the operation as he leads Keith to every photo he takes. 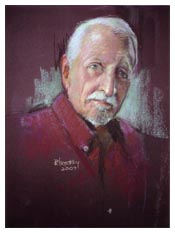 Keith Burnham may have lived most of his life in Illinois, but his heart and mind have always been in Leland. He has been taking pictures of his adopted home for over 40 years and has since entered the digital age. He lives in Leland with his wife Joanne whose family has lived and summered in the area for over 70 years. Armed with a Nikon digital camera, Keith wanders the countryside looking for the essence of Leelanau. His favorite truck is the Scout II and his favorite sayings are: “Every day’s a joy, and some days are more joyous than others” and “God only knows, do you know God?”. His favorite place is…well I think you know the answer. 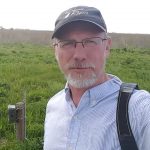 Jim  Burnham was fortunate enough to spend all his summers in Leland growing up. He worked his way up the ladder in Leland, first as a dishwasher at the Lodge, dishwasher and grill cook at the Country Club, sailing school instructor at the Leland Yacht Club and finally hit the undergraduate pinnacle as bus boy at the Cove and grill cook at the Happy Hour. He is the originator of the Leland Report, and for 15 years has provided the palette on which Keith paints. Jim is a photographer, musician and internet specialist from Tremont, IL. Read his blog posts 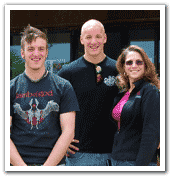 Julia Burnham Keith’s oldest daughter, claims she lived in Illinois but grew up in Leland. Occasionally seen commenting on the Leland Report as “Jules”, Julie fondly remembers her high school and college summers working at the Ice House in Fishtown, hanging out with her cousins and friends, and spending time on the Beach House porch with her Grandma Gits. She is a graduate of St. Norbert College and currently works as a Graphic Artist/Office Manager for Allegra Print & Imaging in Lisle, IL. She lives in Downers Grove, IL with her sons, T.J. (EIU) and Matt (Lewis U.). 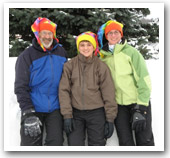 Mary Burnham Curtis (aka theMar) is the first of two middle children in the Burnham Family. In contrast to her hard-working siblings, Mary admits to playing a lot in Leland…sailing, golfing, water skiing, swimming, canoeing the Crystal River, hiking the Dunes, and skiing Sugar Loaf and Timberlee. Despite her carefree days of youth, Mary did work her way up the Leland corporate ladder from babysitter to shopgirl at the Ice House to Cashier/Maid/Waitress/Bartender at the Lodge between her 4 years at DePauw, culminating in a final desperate attempt to earn money for graduate school at U-M by double-shifting at the Lodge and the Village Cheese Shanty. Despite being raised in a house full of artists, Mary clawed her way into a career in Science and is currently the Genetics Team Leader for the US Fish and Wildlife Service, National Fish and Wildlife Forensic Laboratory in Ashland, OR, where she lives with her husband, Gary (aka OhItsYou), son Chris, and crazy dog Ivan (who desperately wants to play with Biscuit). We all still play…a lot. 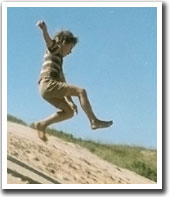 John Burnham (aka No. 1 Son) is the second of two middle children in the Burnham Family. In contrast to his hard-working siblings, John admits to playing a lot in Leland…sailing, golfing, water skiing, swimming, canoeing the Crystal River, hiking the Dunes, and skiing Sugar Loaf and Timberlee. John worked his way up the Leland corporate ladder from dishwasher and busboy at the Lodge to harbor attendant, garbageman, golf pro assistant at the Leland Country Club, and prep cook at the Cove, even through his 5 years at the University of Illinois. Despite being raised in a house full of artists, John clawed his way into a career in Engineering and is currently a senior technical specialist at CNH Industrial in metropolitan Chicago, where he lives with his wife, Carolyn (aka No. 1 Daughter-in-law), daughters Lauren and Shae, hamsters Pankake and Peach, and cats Willow and Flynn. We all still play…a lot. Just like Mary.