Listen to our interview at AM580 with Colleen Wares! --  Read the history behind the Leland Report Book
Read the latest stories from the road by Jim Burnham
Report # Photo:
Where is My Ice?
Focus Trek 14 - I am 50 Today Part 2

“Forty is the old age of youth,
Fifty is the youth of old age’
-Victor Hugo 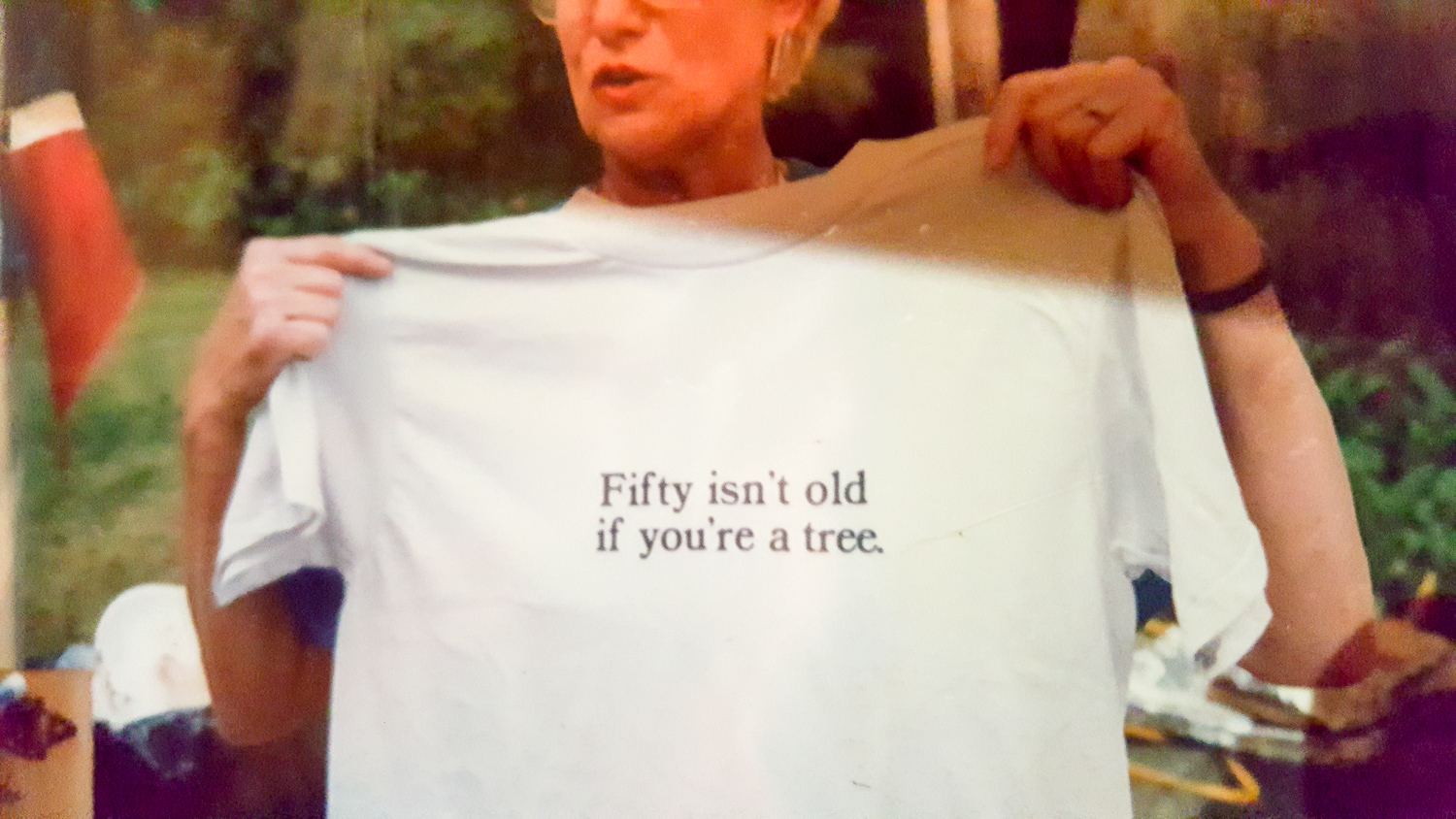 And by the time I finish this, I probably will have already crossed that threshold. Don’t worry, you didn’t miss anything. There were no parades, no skywriting, no marching bands. I put in orders for all those but nobody showed up. It is snowing right now, so I figure they slid off the road on I-74 somewhere. Nobody ever seems to remember how to drive in snow out here, it happens so infrequently. And whenever it does snow, I either:

#1 usually means dragging the blower 40 ft through X inches of snow to the driveway because of #2. 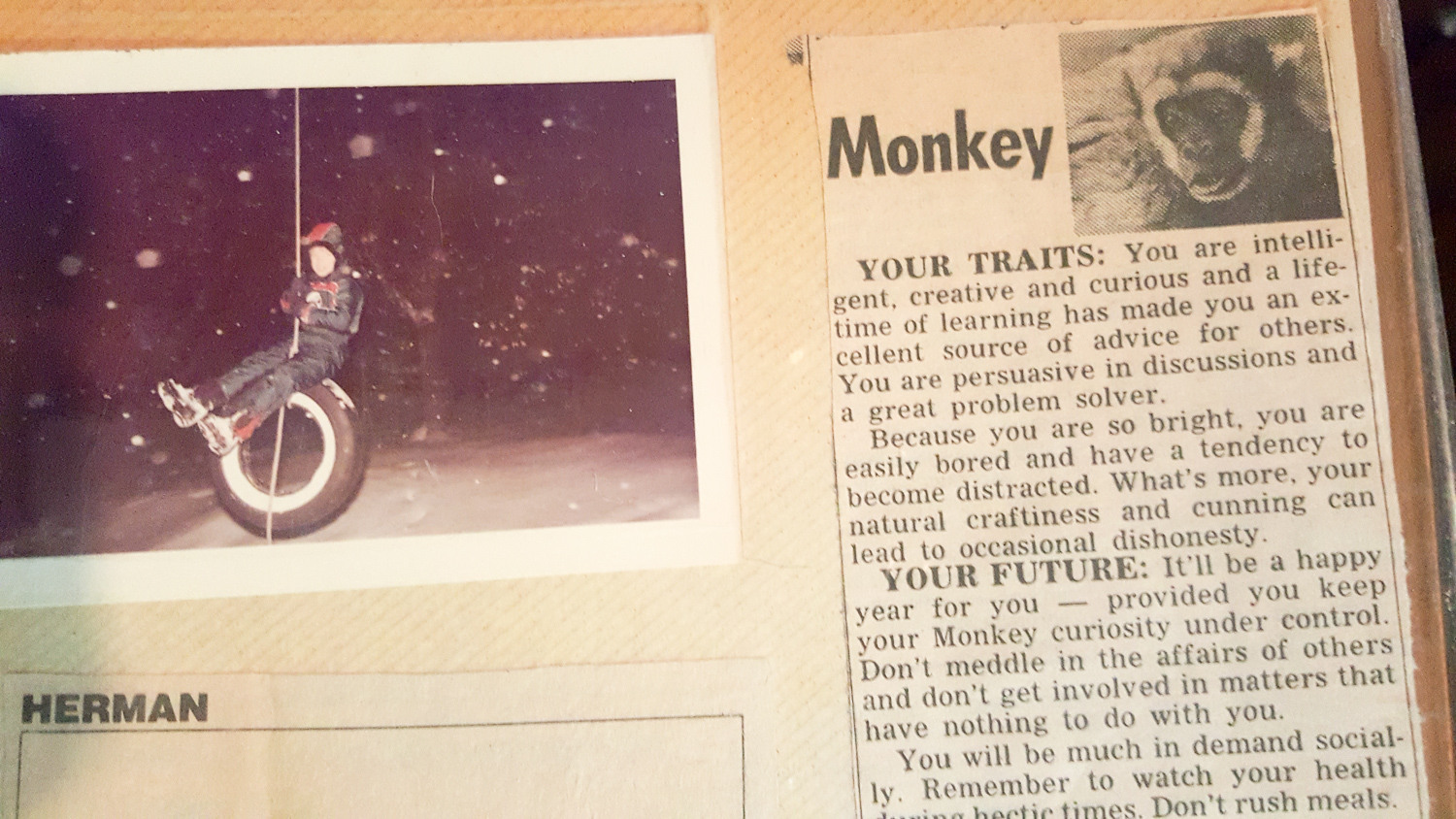 I was born in the year of the monkey. Surprised? No? Shut up, Andi!. My favorite part of that horoscope was the last few words. “Don’t rush meals”. I pretty much ignored the rest of it (aside from the cunning part leading me to occasional dishonesty). Again, shut up, Andi!

By the way, the photo of the woman holding up the t-shirt with the quote is my Mom when SHE turned 50. That was 30 years ago. Oh, god, now I feel REALLY old. Moving on.

So today’s article is what got me from there to here. From my delinquently juvenile days in Riverside, IL and Leland, MI to my decadent 20’s in Glen Ellyn and Willowbrook, IL, to my fatherly 30’s in West Chicago and Tremont. A smorgasbord summary of TMI for you highlighting my downs and downs, my triumphs and tribulations (my trimphulations / tribulumphs?) throughout history. Also, my history with motorcars and it’s not all Maseratis and Lambos, like you are expecting. The photography is horrible, and the stories one-sided, but, you bought the ticket so take a seat. 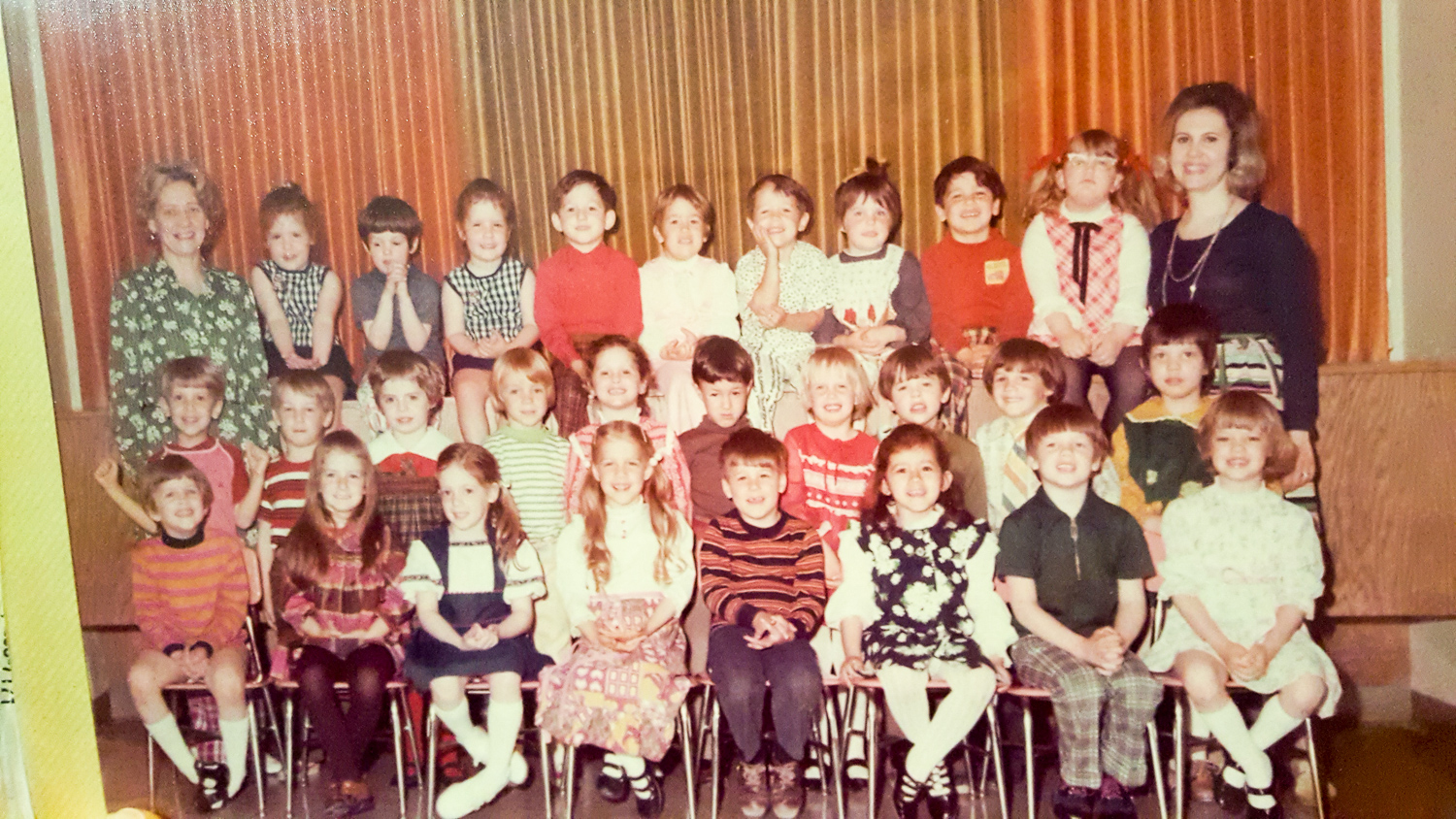 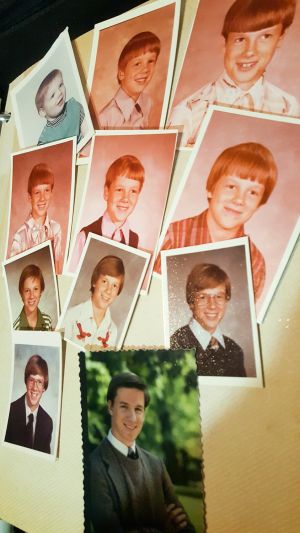 I am being so lazy about this article that I am not even scanning the photo prints I have. I am simply photographing pages directly from my album. Strap in, or strap on, the ride is a little bumpy.  The bottom two photos are High School Freshman to High School Senior. Jim Halpert look-alike contests, here I come! There was a mullet somewhere in the middle there and at the same time parachute pants and zippered sleeveless sweaters. I wore sunglasses at night (no joke).  And sadly, I am not as literate and I hoped I would be at this time of my life. Honestly, I thought I would read more classical favorites and not things like “Javascript for Dummies”. Life lessons I’ve learned over the years never began with a chapter on “mutable objects”, “big endians” or “little endians”. With that said, I am at least 20 pages into 3 different non-programming books. That’s 60 pages. Yea, me!

BTW, the first Indian woman I ever worked with was Anu. When I hear the term “little endian”, I always think of her. I hope that sounds more funny than racist. 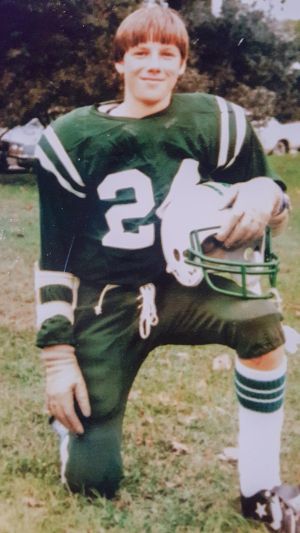 There is a reason why this uniform is so spot-free clean. No, it wasn’t because my Mom had a great washing machine, it was because I RARELY EVER PLAYED. After my first fist fight, I quit the team. However, the fist fight was probably the most playing time I ever got. But, that was probably a good thing. I also played basketball for the St. Mary’s Demons. We were 1 and 45 over three years. I’m not an athlete. Ha ha ha! I love ironic satanic catholic school team names. 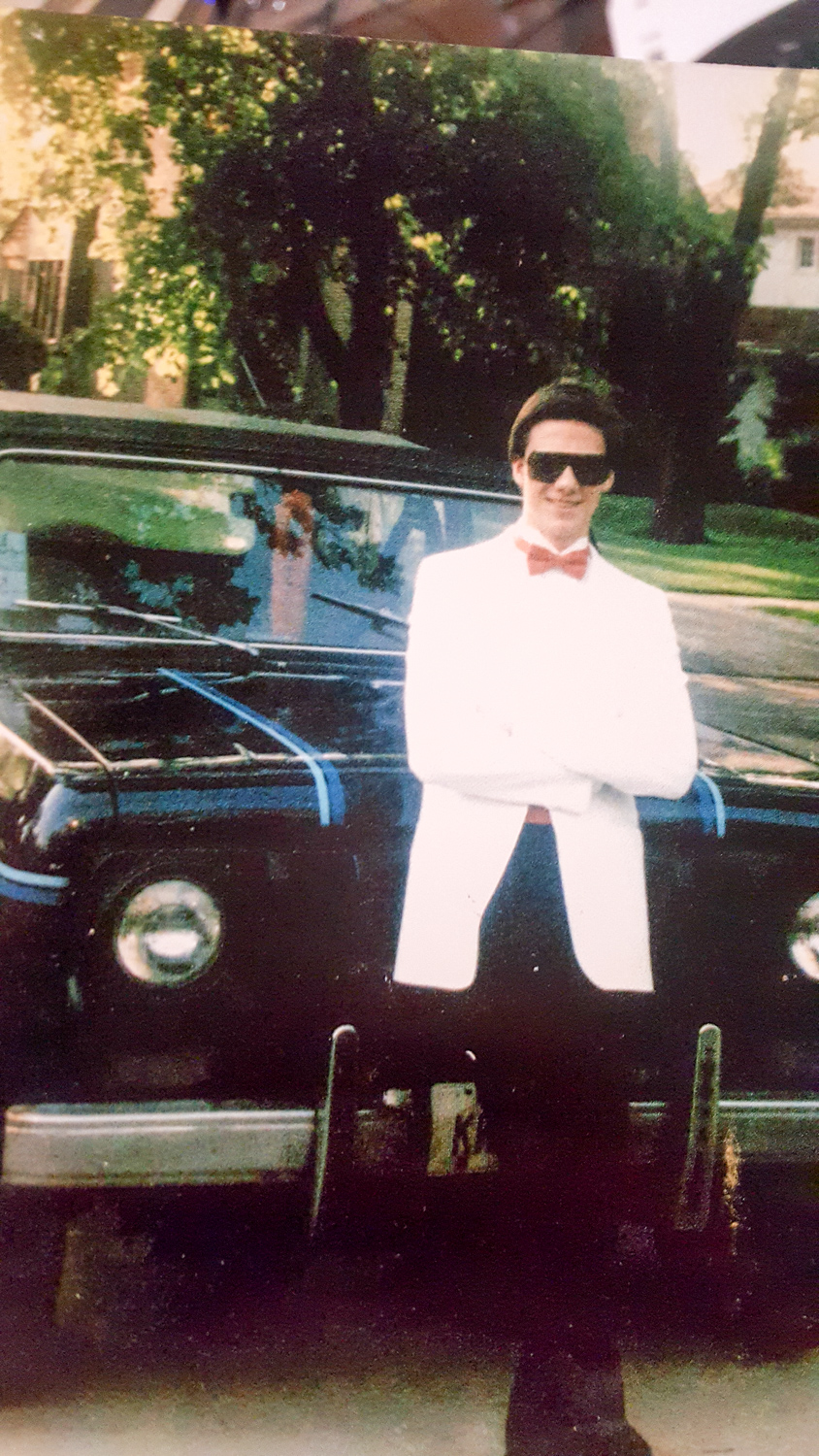 Not as ironic as that hair, though! And not as 80’s as wearing a white tuxedo jacket to a dance and driving your date there in a 4×4. Yes, it had stripes, but that only makes it a little better. 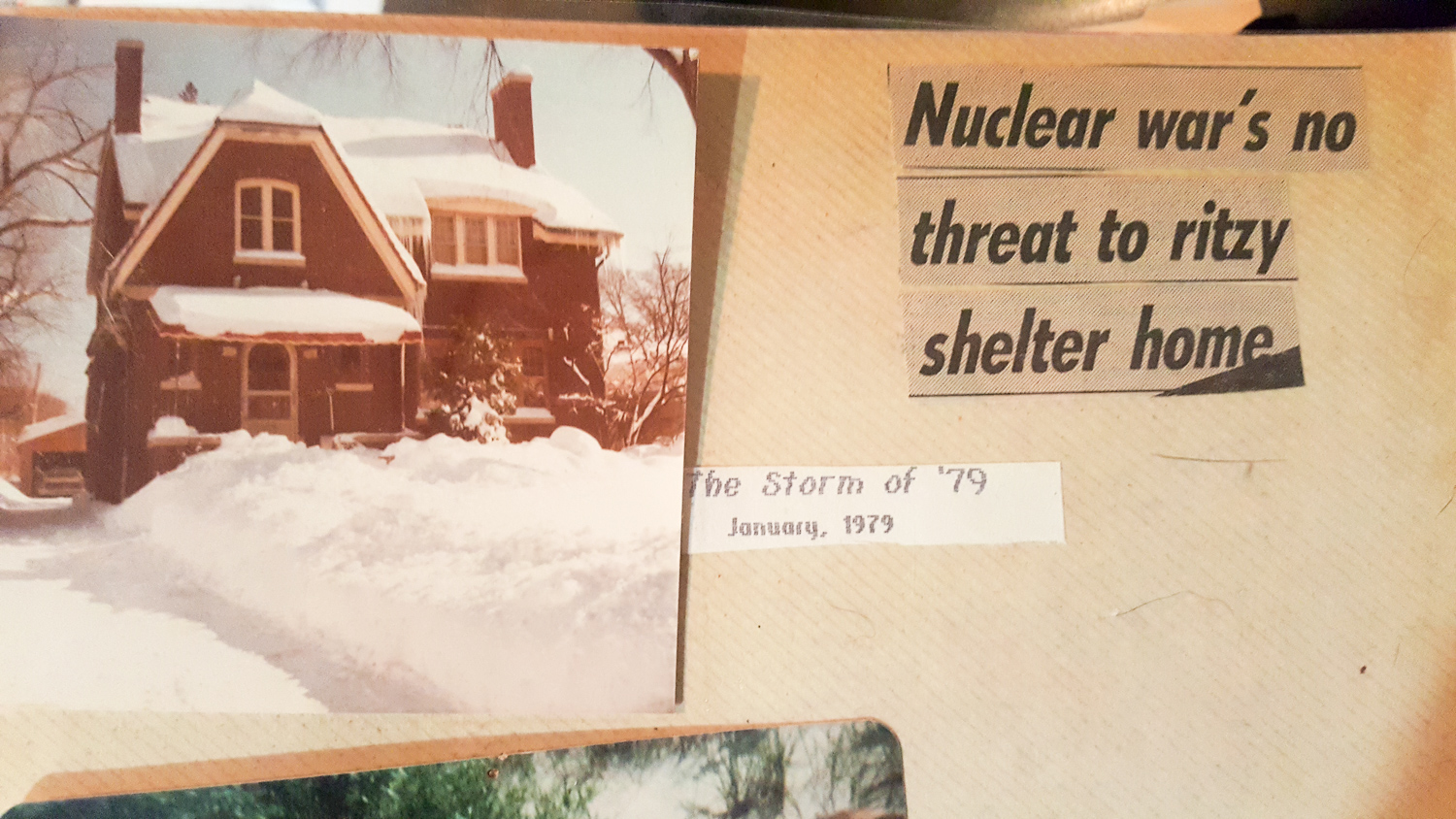 Do you remember the show of ’79? Yeah, I remember the snow of ’79. Never saw another one like it since. This was in Riverside, IL where I grew up. This house was built in the 1920’s and originally had those screw-in type fuses and that old wiring that makes that cool cracking sound when you bend it. That’s because it was actually cracking. The asbestos wrapped pipes in the basement were the best. I also miss the old-timey radiators. I remember wanting to stay home sick one day and had the bright idea to hold the thermometer on the radiator (a good example of that cunning craftiness I was supposed to have). The jig was up when my temperature showed a death-inducing 150 degrees and I had to admit I wasn’t really sick. I may have been the only kid to do that. EVER. 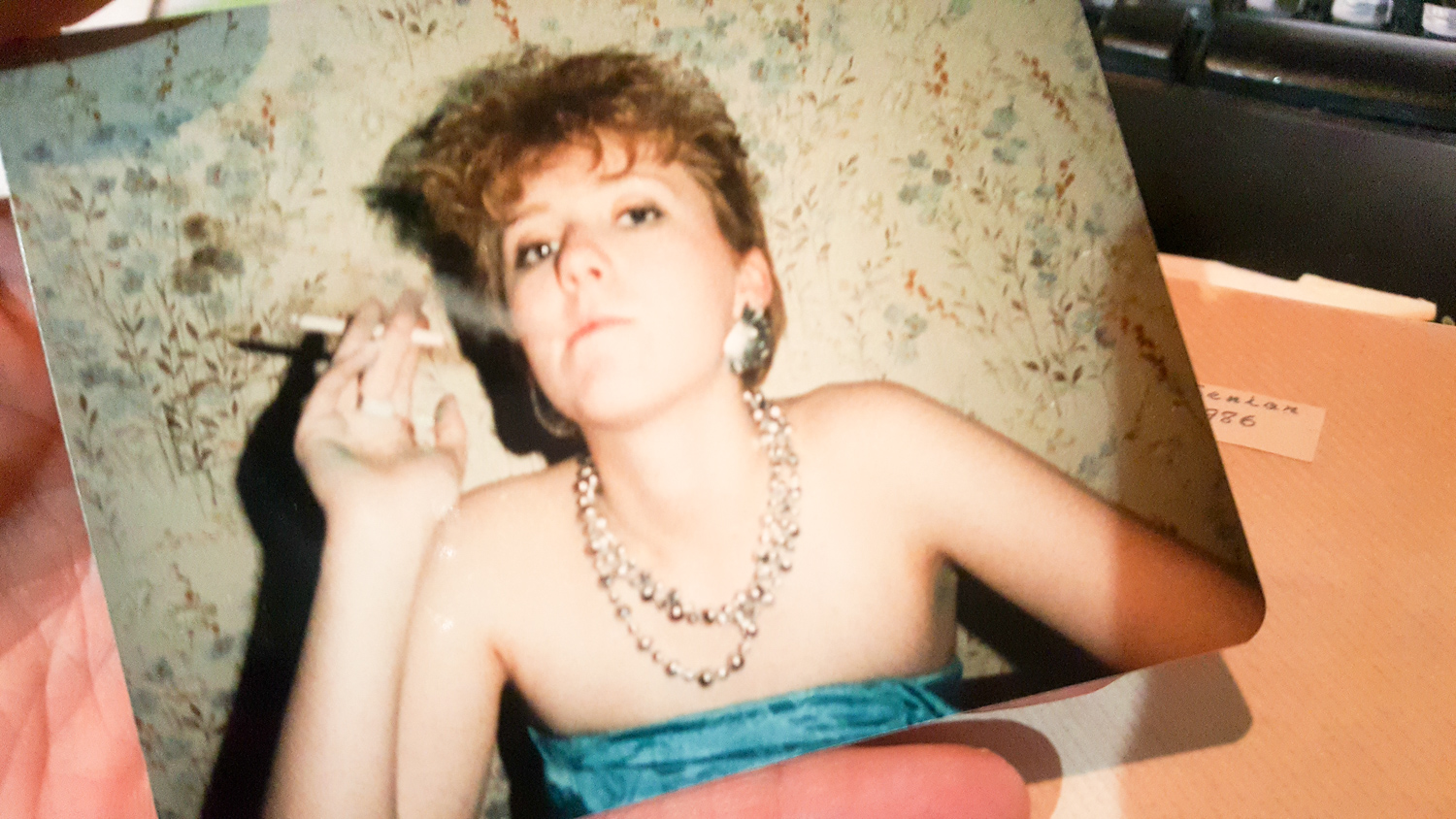 I post this photo for two reasons. One, it is important in my photographic history as I see this as my first truly edgy photo of my high school girlfriend at the time. Very Marlene Dietrich. 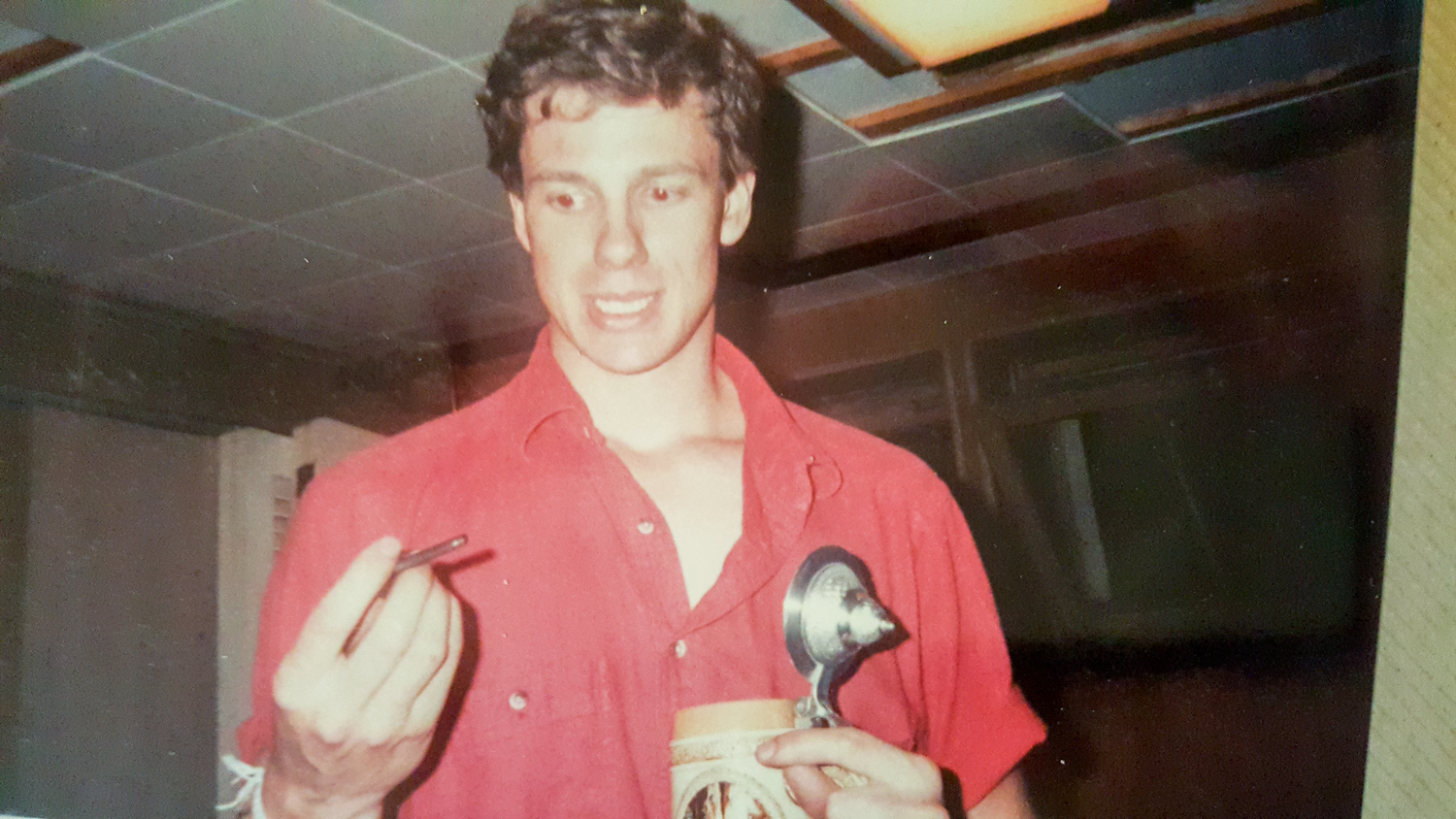 And two, mostly because she is the one who gave me this perm. Cheers, KT! Now we are even.

And SHUT UP, ANDI!

So, not being an athlete meant I was destined for the stage! I was Billboard Rawkins my senior year in Finian’s Rainbow. That meant I went through part of the play in blackface as retribution for my sins as a racist white senator. (Good thing we don’t have any of those anymore, right?). I was also in a band called “The Kooky Guys”. Yes, that’s me holding a real double barrel shotgun on my friend in a skit in our variety show “Banua”. I was also a noob songwriter. Rock bands, 4x4s, shotguns, and Broadway musicals, yeee-haaaw, you’d think I was living in a Kid Rock video! 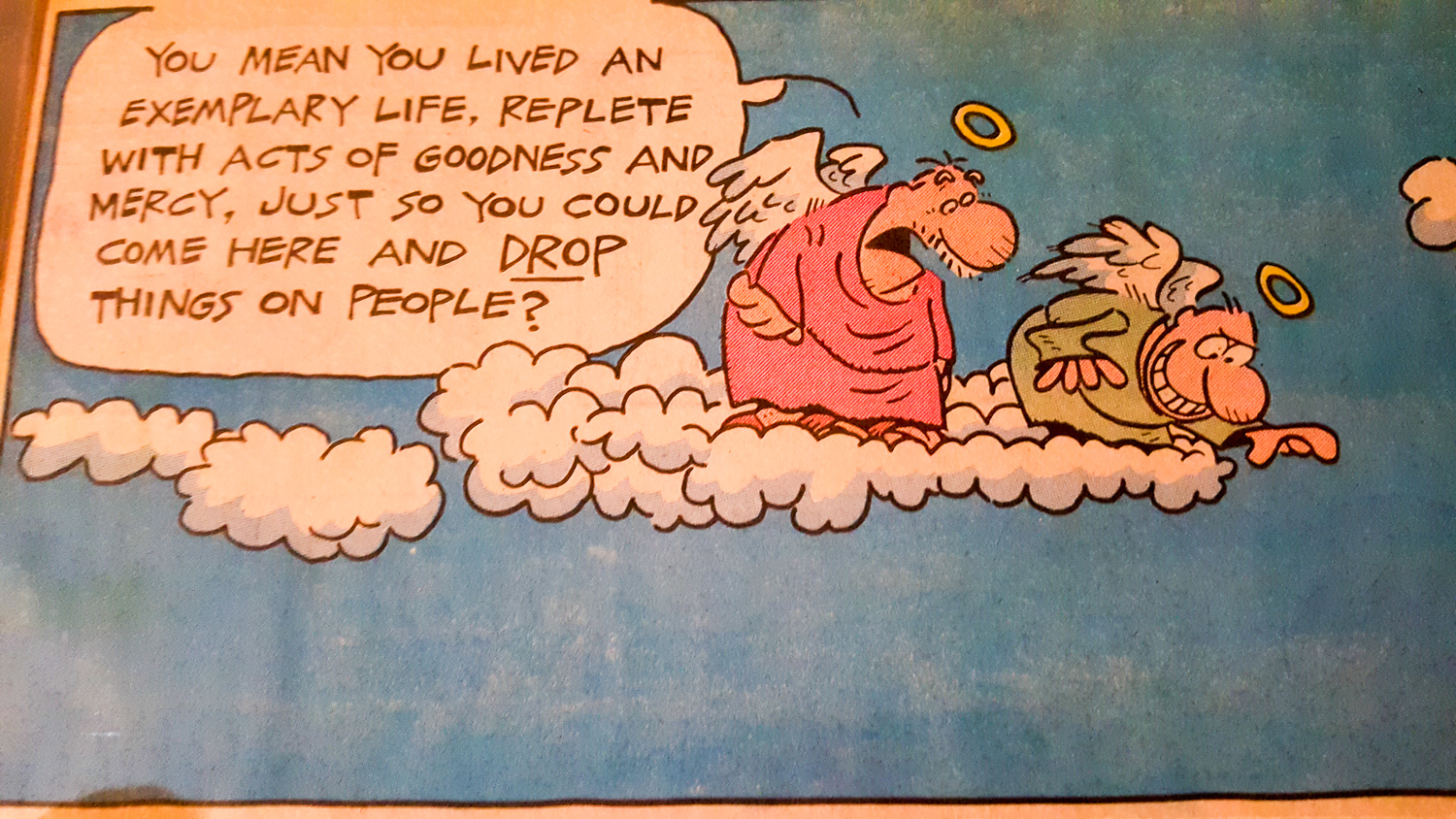 Shout out to Bob Thaves, doing the Ernest strips since 1972. This one might be that old and has been in my album since day one. 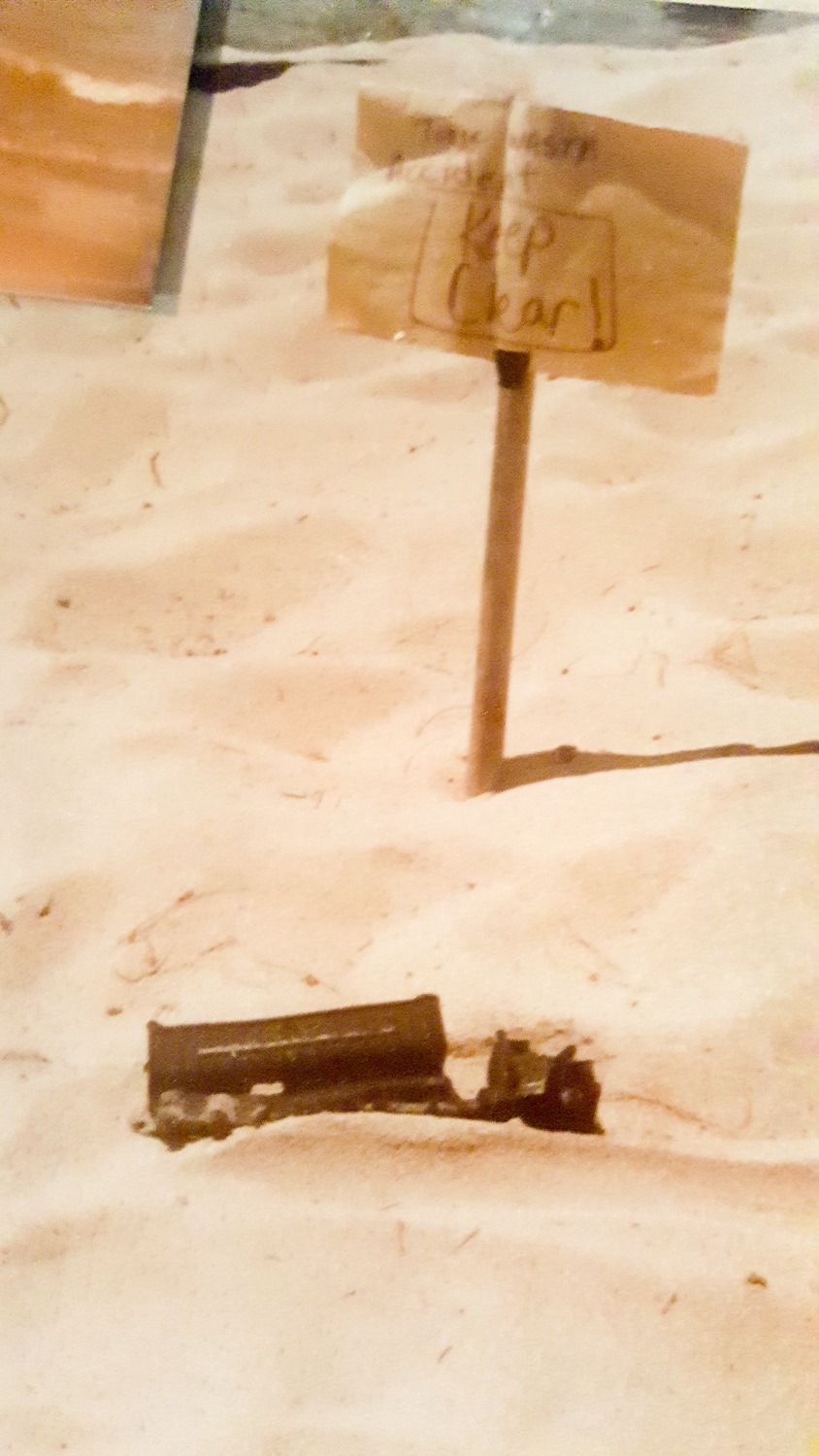 Hey, if Andreas Gursky can sell this image at auction for $4.3 million, why not? The man is an amazing talent, but I think someone misplaced a decimal point. 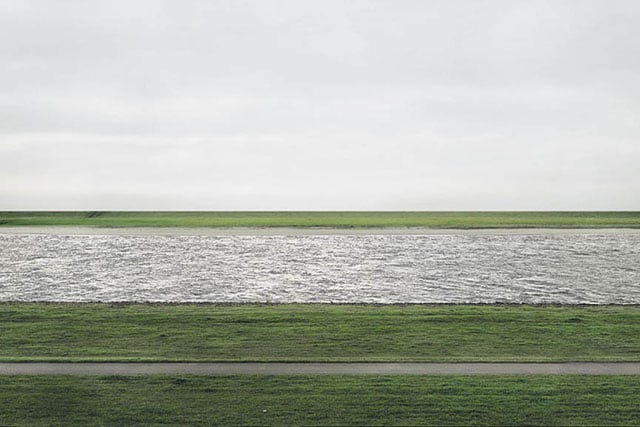 I’ll cover Leland, Michigan in my next article. This was where I escaped the drudgery of suburban living for a taste of the outdoor life every Summer. I don’t think I was conceived there, but I was born in February, which puts it squarely in June-July timeframe which you have to admit is pretty suspicious. We’ll visit the University of Dayton as well. It’s where I learned stuff.