‘Whenever the pressure of our complex city life
thins my blood and numbs my brain,
I seek relief in the trail;
and when I hear the coyote wailing to the yellow dawn,
my cares fall from me – I am happy.”
-Hamlin Garland 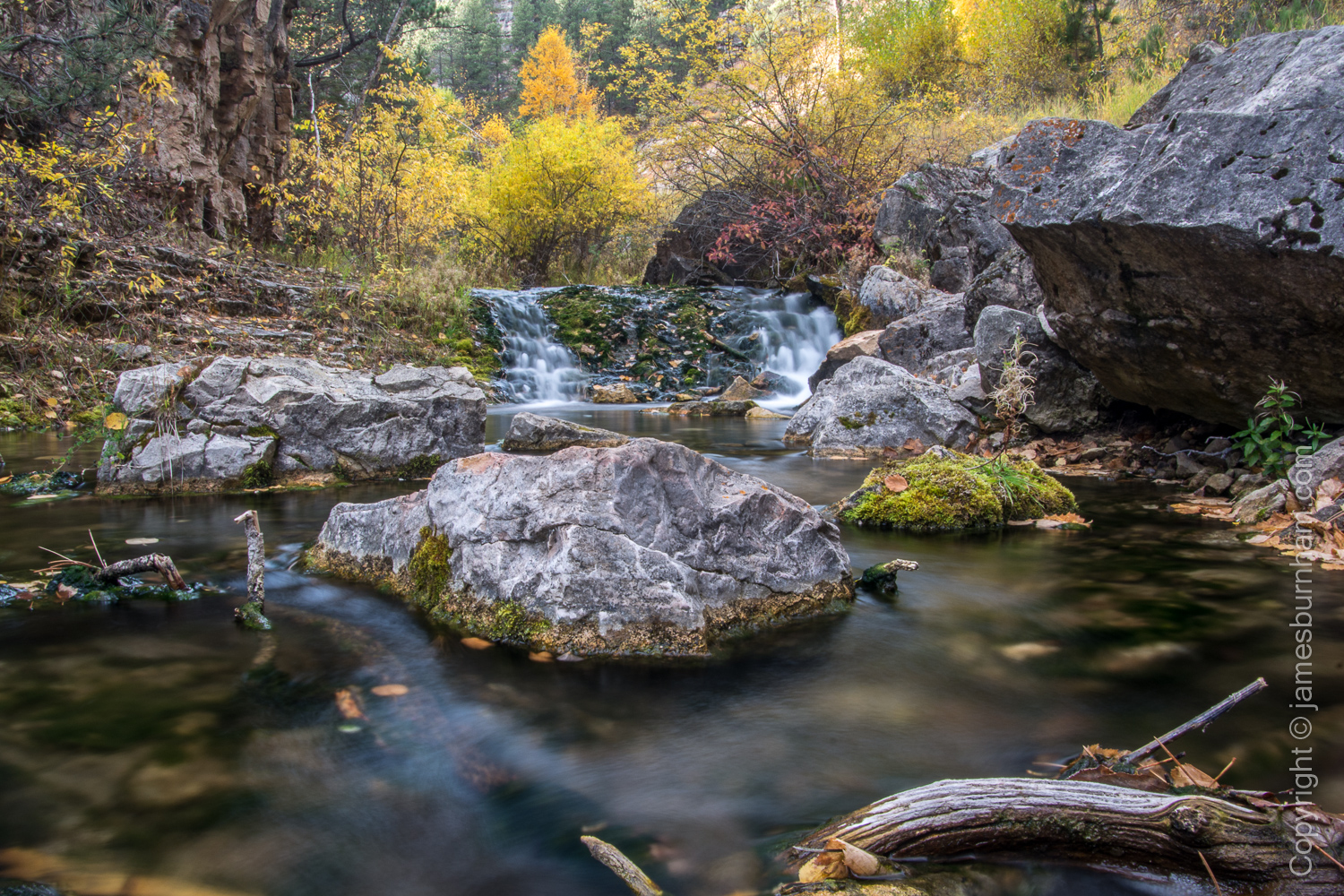 My name is Jim Burnham. I am a US photographer and I enjoy finding photographs in places I’ve never been before, with minimum preparation and a vague itinerary. This is a true Focus Trek from the Black Hills. Follow me on Instagram or Twitter -> @BurnhamArts

In Focus Trek #9, I introduced the Black Hills Photo Shootout. A weekend of workshops in and around some of the most beautiful and varied landscapes in the country. This was my second trip, and although I normally do not revisit the same destination repeatedly, I made an exception for this (as I do for Leland, MI as well). You just have to make it different.

So, how do you make he same trip different? Well, by making the same trip different (duh). I added more time to the front end to be able to take the back canyon roads up and extra time on the back end to do the same thing. Last year, I ran into a problem where the weather was so spectacular that I found myself stopping every half mile, or 100 feet in some cases, to take a picture. I really needed an extra day on the front and back. But having a regular job makes my options tight.

The path I chose to take (in blue) from Rapid City to Spearfish was long compared to the direct route up Interstate 90 (yellow) and even last year’s route (green). I still have not yet driven down I-90 all the way, either way. The 2017 path included Mt. Rushmore and heading North from Hill City, it was mostly gravel roads. The fact that it was mostly cloudy the whole way up was not ideal, but the trip was awesome nonetheless.

The map in short: 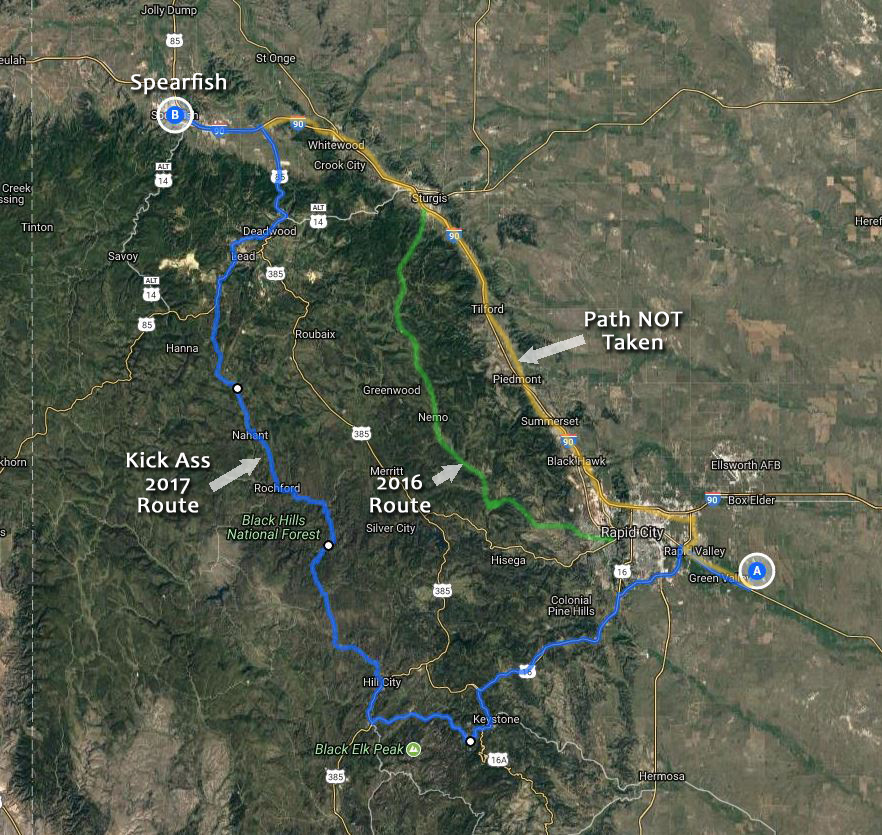 I thought having four hours to drive up the back roads would have been enough. The weather was not as good as last year so I didn’t think I would have as many places to stop and take photos as I did. Most of the delay was shooting around Mount Rushmore, and I realize now I shouldn’t have wasted so much time there. 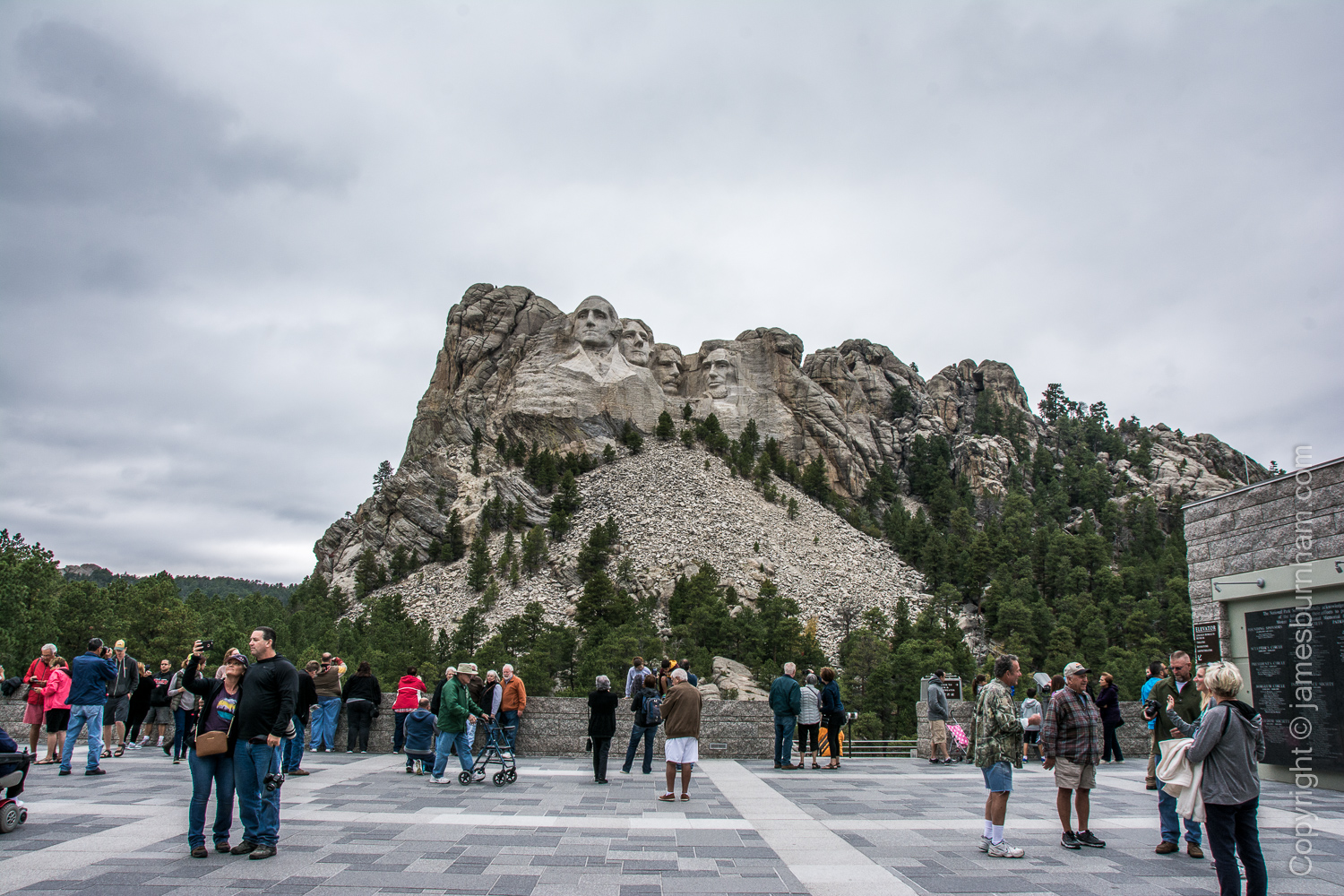 Yes, it’s an important national monument, and I’m glad I finally saw it, but let’s face it, it’s been photographed millions of times, and even on a grey weekday, it was filled with loud, selfie-taking tourists. Ok, I took a selfie, but I was quiet about it. 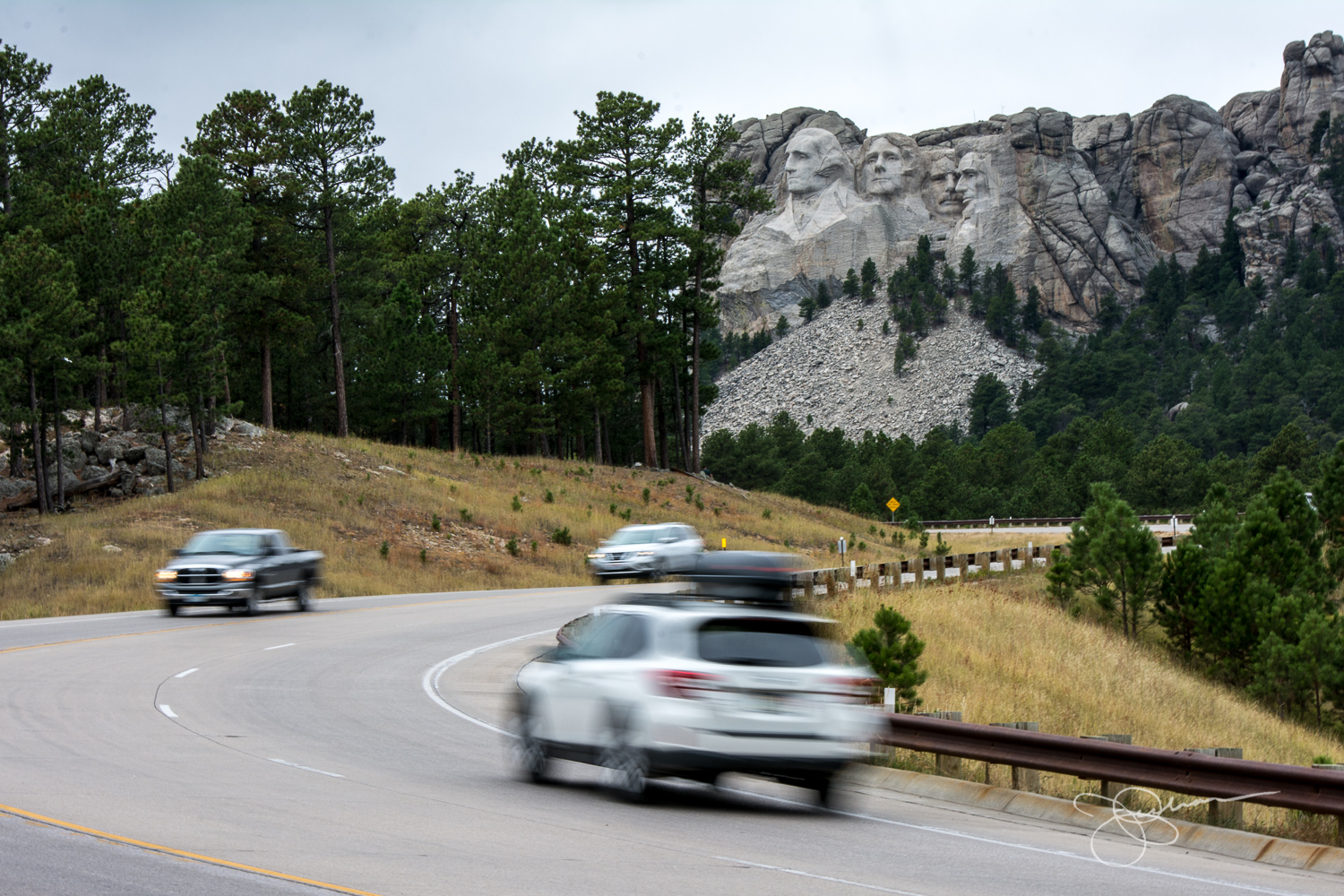 I wondered what that mountain would have been like had they not blown it up. And here it is… 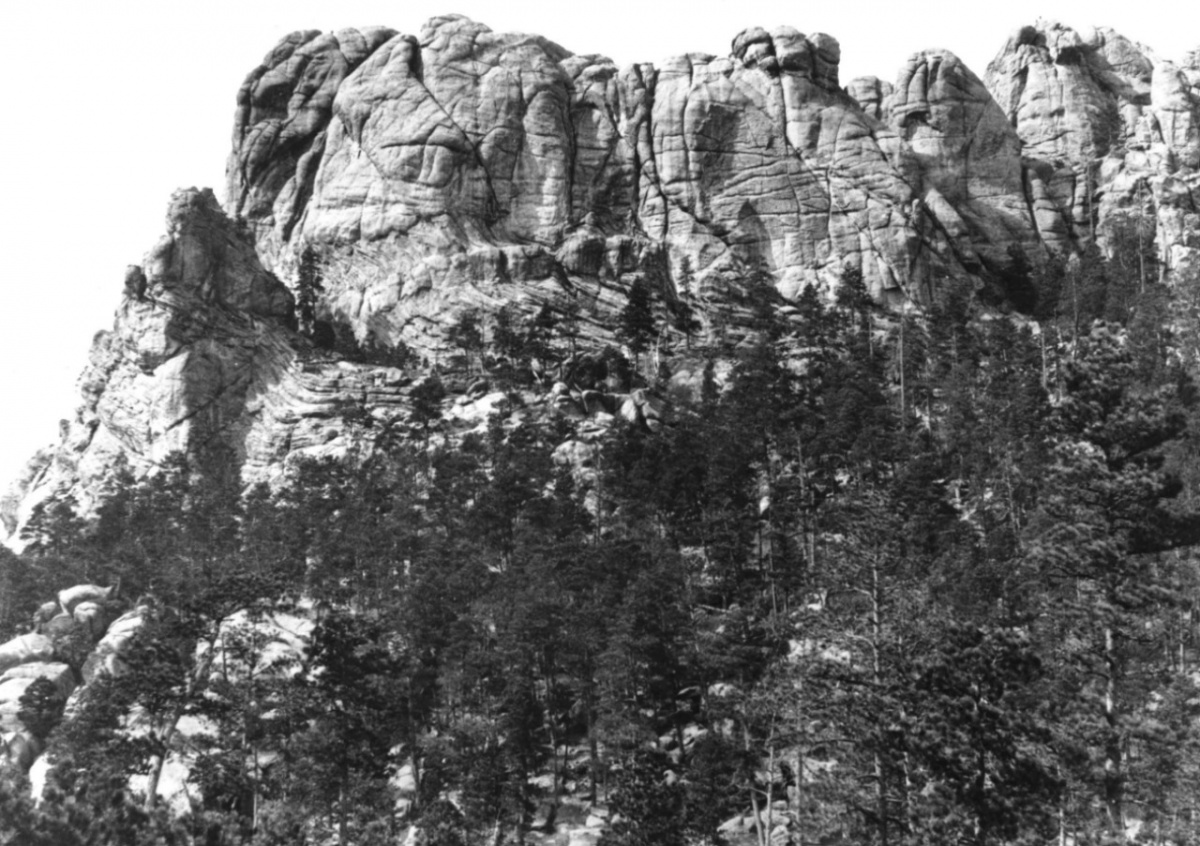 So I can appreciate the incredible skill and manpower it took to execute this, but cringe at the fact that it was done at all to that beautiful piece of stone. Then again, the number of people it provided jobs for during the worst of the depression is comforting. I’m just glad they didn’t continue with the rest of the bodies as was originally planned. Read more about Bill Groethe, the man who photographed Mt. Rushmore for eight decades:  http://time.com/3726875/photograph-mount-rushmore/.  The Smithsonian also has an interesting video with more information: https://www.smithsonianchannel.com/videos/mount-rushmore-was-supposed-to-look-very-different/27312

The route up was pretty grey, but I managed to find an attractive wall of stone for a large format panorama. This was about 12 vertical shots stitched together. The equivalent of 120 megapixels

The path I took up through Hill City to Mystic Rd followed the Mickelson Trail, a roughly 105 mile bike trail that runs from Deadwood down to Edgemont. One of the photos here show one of the many bridges that spans the road as the trail snakes back and forth. Maybe something to try in the future.

A few weeks before, I asked Nicole Hahn if she would be interested in me doing a short slideshow for the participants at some point in the weekend. I got a good deal of decent shots in 2016 (my opinion, of course) and thought it might help spark their imagination in case they find themselves in similar situations. I was surprised to get her nod of approval and I ended up opening up for the keynote speaker, Robert Vanelli. Vanelli is a commercial, sports and portrait photographer from Tampa, Florida. To say he is “larger than life” sounds like I’m being disrespectful, but he is, in the metaphorical sense and has the stories to match. He is a talented photographer, writer and instructor and unique character. You can find him at http://www.vanelliandfriends.com/ 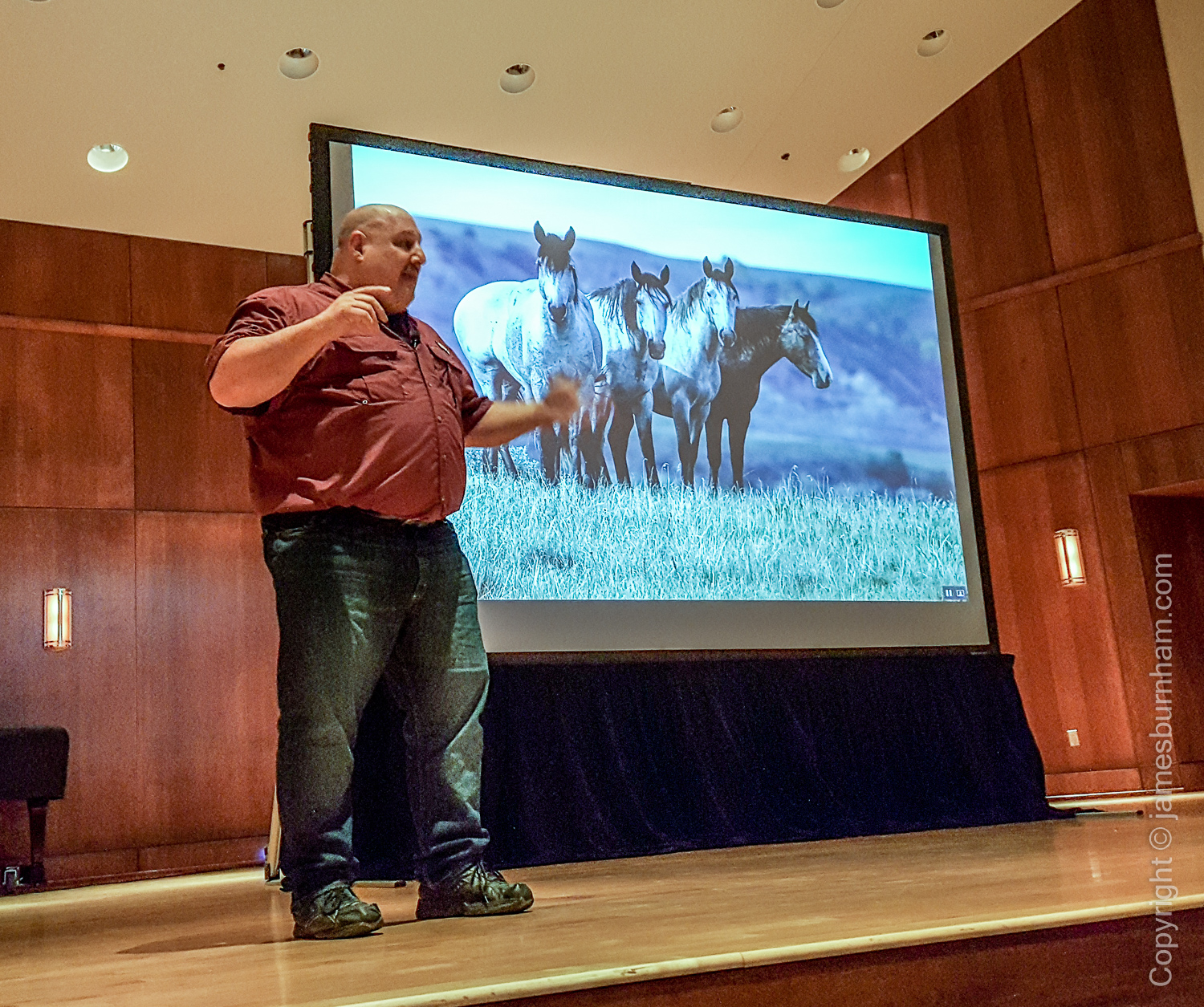 I spent the morning and afternoon on Iron Creek Trail. In the morning we went out with Mike Wolforth, a local photographer based out of Rapid City. This trail is 11 miles down Spearfish Canyon from Spearfish. The sun was low and the creek had a nice even light on it from the sky. Some long exposure creek shots were in order.

The trail and surrounding cliffs are spectacular, with way too much to look at in a single morning.

In the afternoon, we connected with Jim Caldwell and his wife Carolyn (look him and Fred Rogers up at http://fotobug.podbean.com). He and I met up last year on the same type of outing up to Roughlock Falls. That’s a popular location and might get pretty crowded like last year so we headed up to Iron Creek Trail instead. This was ok with me since I did not use my polarizer in the morning so I was looking at a great deal of sky reflection on the river.

Unfortunately, I had also borrowed a lens from Tamron for the afternoon and left my other lens back in my car with the filter ring on it. I ended up hand-holding my polarizer filter on most of my shots. And if any of you have tried this, you know what usually happens… 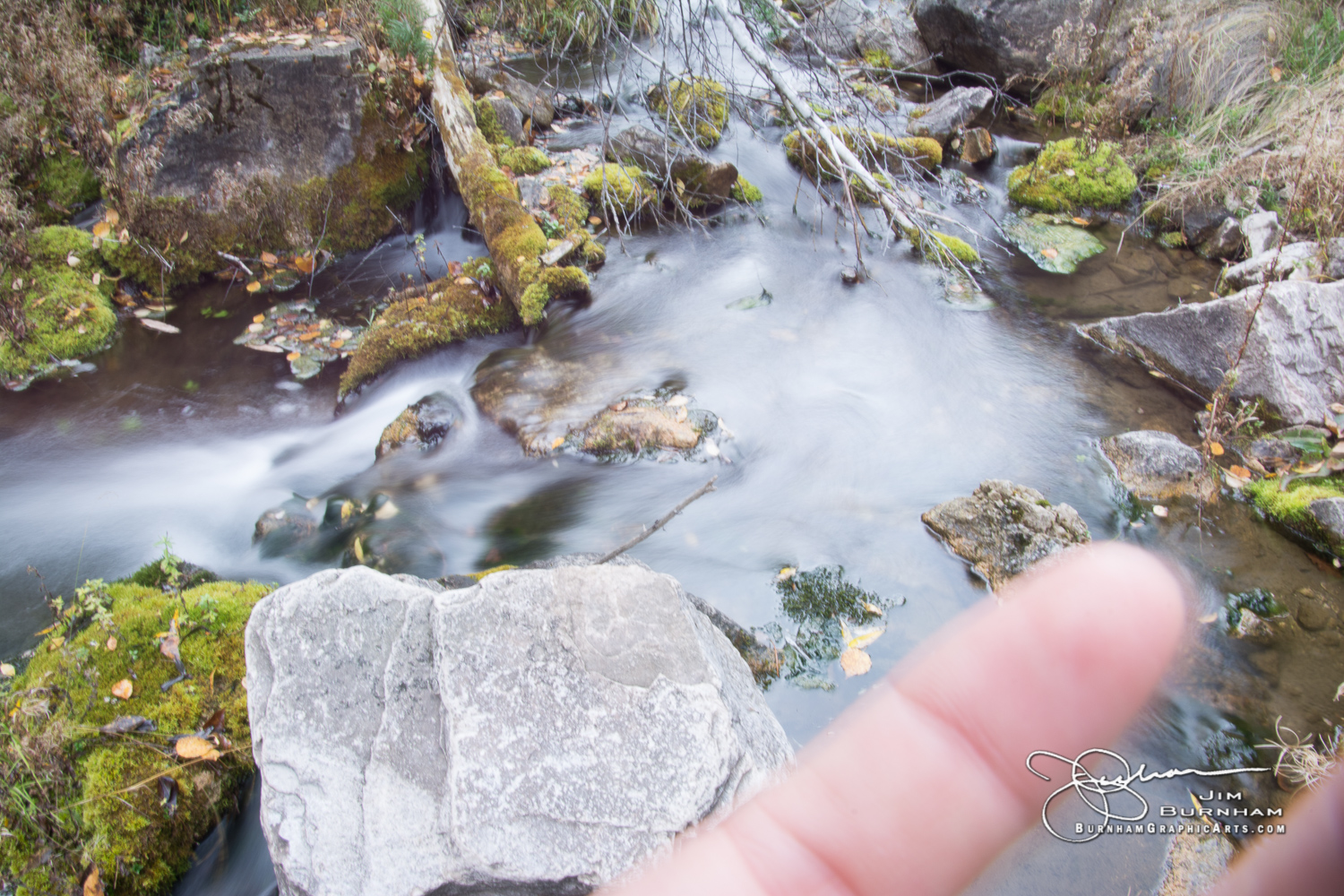 But when the polarizer is on right, (and my finger is safely tucked away) the difference is dramatic. The first photo with my errant finger is with the filter rotated to 0 polarization. The second photo below is with full polarization. There is practically no sky reflection in the water, and the colors really jump out. 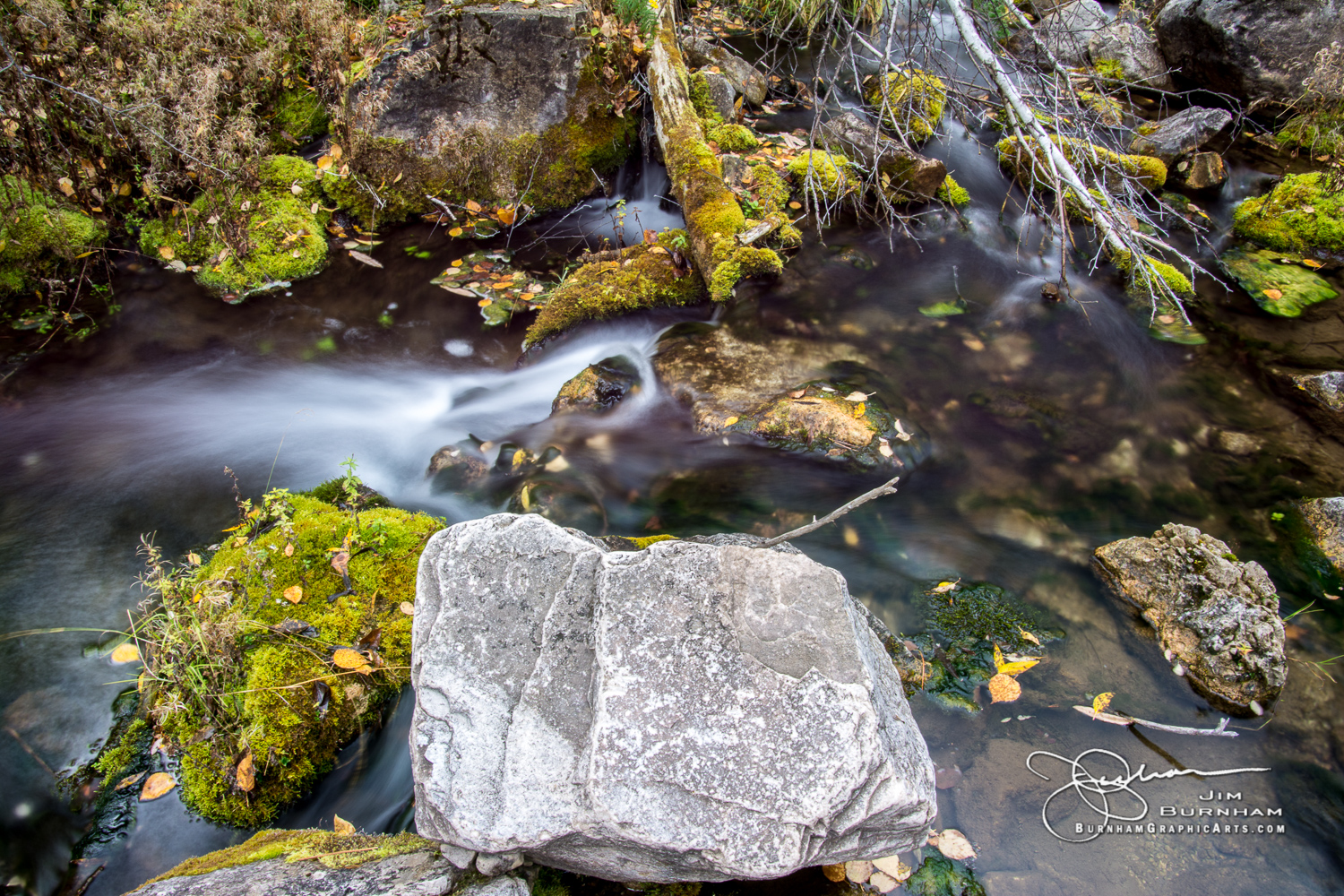 Since I had already been there that day, I was able to help point out the good places…or…did I purposely misdirect everyone so I got the good spots? 😉 Shoot, I wish I’d thought of that! 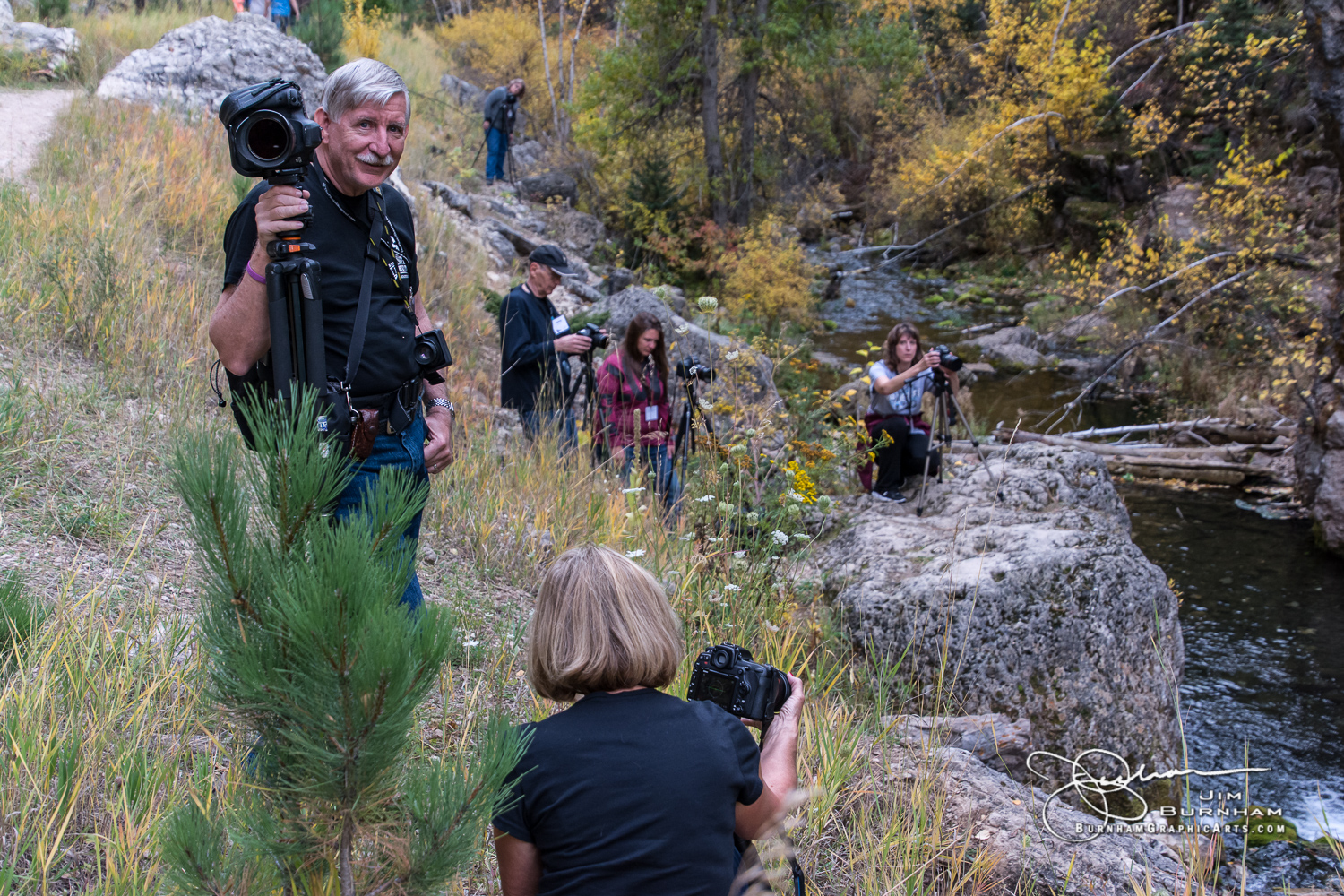 We found great places like this cave from the morning shoot (Photo taken by Kelly Whittaker). So, if another photographer uses my camera to take a photo of me, who’s photo is it? This cave looks big, but it is definitely NOT stand-up height inside. 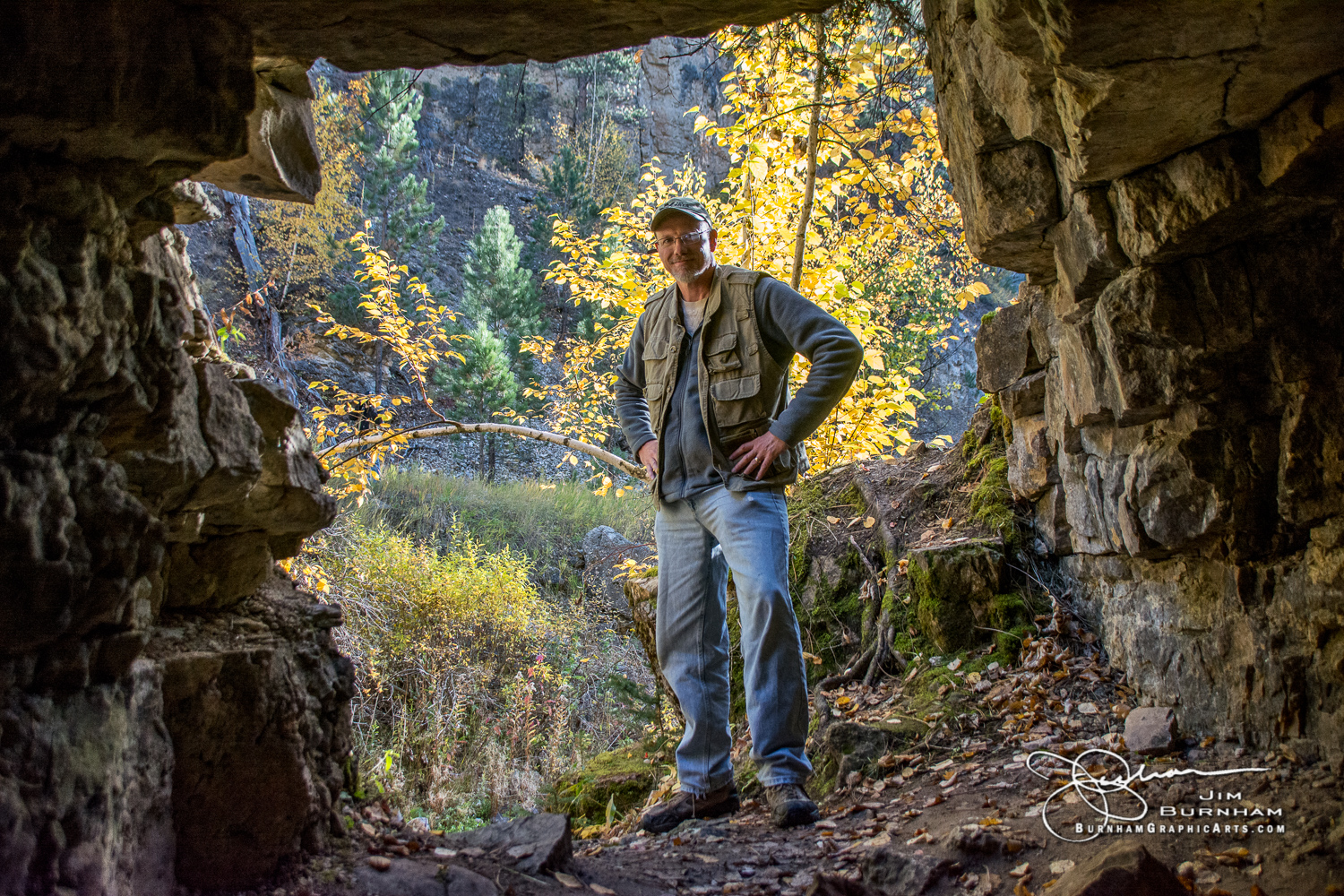 Now we get to things that I am not experienced in, light painting and creative studio-type work. We went out to the High Plains Western Heritage Center in Spearfish at 1am to light up some old period buildings with flashlights. With a long exposure, you can do some interesting things with artificial reflected light. It’s like using a flash, but instead of one quick burst of light, you can light up different parts of a structure over separate exposures and combine them in Photoshop (look up the Lighten layer effect).

I’m not thrilled with my initial combination, but there’s always next time. I remember trying to do this with trees last year and ran into difficulty illuminating the higher parts because of the light fall-off, but at that time I didn’t consider combining different images.

I fell into a more comfortable routine allowing the natural light from the city to illuminate the subjects. Except for the first shot, where I stood behind the shed and shined a flashlight inside to light up the window.

We heard a lone coyote howl in the distance that morning. Not too long after that, a pack responded not too far off in a different direction. This is the main reason I picked the quote at the beginning of this article. It was quite a thrill.

That was the day the rain started heading in. Fortunately, my last workshop was indoors with Mr. Caldwell again. We were left to experiment with different things like blacklight subjects and water drops, but all of my experiments were failures. If it was not for the last demonstration with illuminated smoke, I would not have come out with anything that afternoon. The bluer image is a combination of 12 smoke images using the technique described above using Lighten on each layer.

In conclusion, this was another extraordinary photography trip and hats off to Nicole and Jason Hahn and all the workshop leaders, especially those that come together every year for this event. What is also special is that several high school students are given free passes from donations gathered by participants. The students at Black Hills State University also give their time to be workshop ambassadors and assist the leaders. For more information on this event, go to Black Hills Photo Shootout. They’re going to be holding the 2018 shootout out of Rapid City and the itinerary will include wild horses from what I hear. Should be a memorable experience, for sure.

I’ll leave you with this trip down Spearfish Canyon Rd (Hwy14a) from Cheyenne Crossing to Spearfish. 18 miles in 4 minutes by the magic of time-lapse. Go full screen and hang on…