Listen to our interview at AM580 with Colleen Wares! --  Read the history behind the Leland Report Book
Read the latest stories from the road by Jim Burnham
Report # Photo:
Focus Trek #9 - The Black Hills Photo Shootout
Focus Trek #10 Part 2 - A Yankee's Guide to Driving (and vacation Photography) in Britian

“That her face, at first just ghostly, turned a whiter shade of pale”
– Keith Reid/Procol Harem “Whiter Shade of Pale” 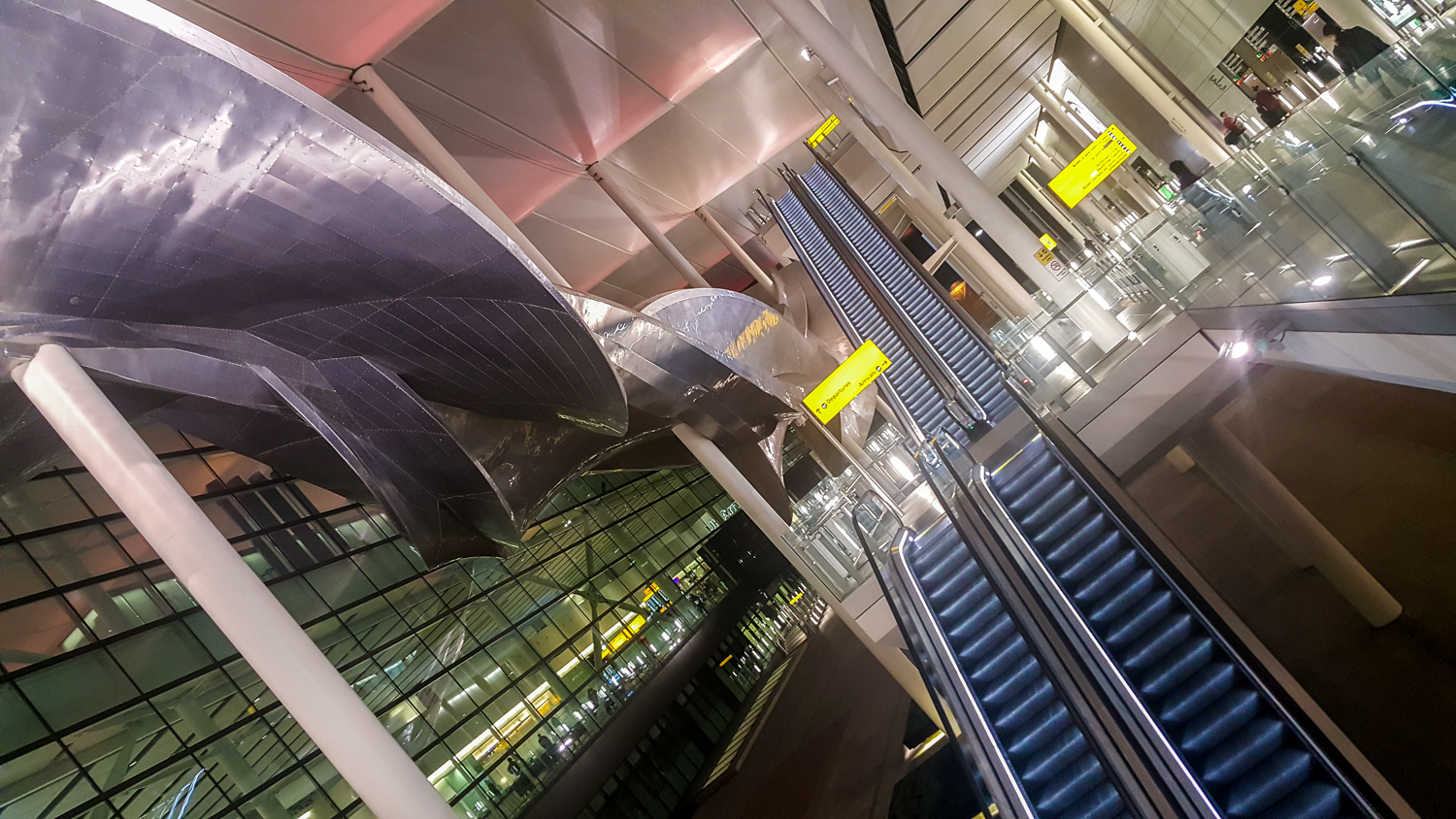 At 5:30am on Sunday, Heathrow Airport is relatively empty. The silver sculpture is a depiction of an airplane’s slipstream. I purposely tilted the view as if I was in a plane following behind. Camera: Samsung G6

Originally, I was going to make this article about driving in the UK. After 1200 words, I realized I completely digressed from my original theme. If you read the last article, “Black Hills Photo Shootout“, I was talking about the freedom to photograph when I wanted and what I wanted. Not pinned down to any specific itinerary other than the workshops I was on. This article was going to be the antithesis. When travelling with family, how do you adjust your focus? Where do you draw the line between getting the shot you want and the needs of the family (otherwise known as the “itinerary”)? Since this trip to the UK was for my wife’s birthday, it was her show. This is the second time we’ve been there and the first time our kids traveled outside the country. On this trip I was a follower, so I chose my opportunities selectively as I found them. 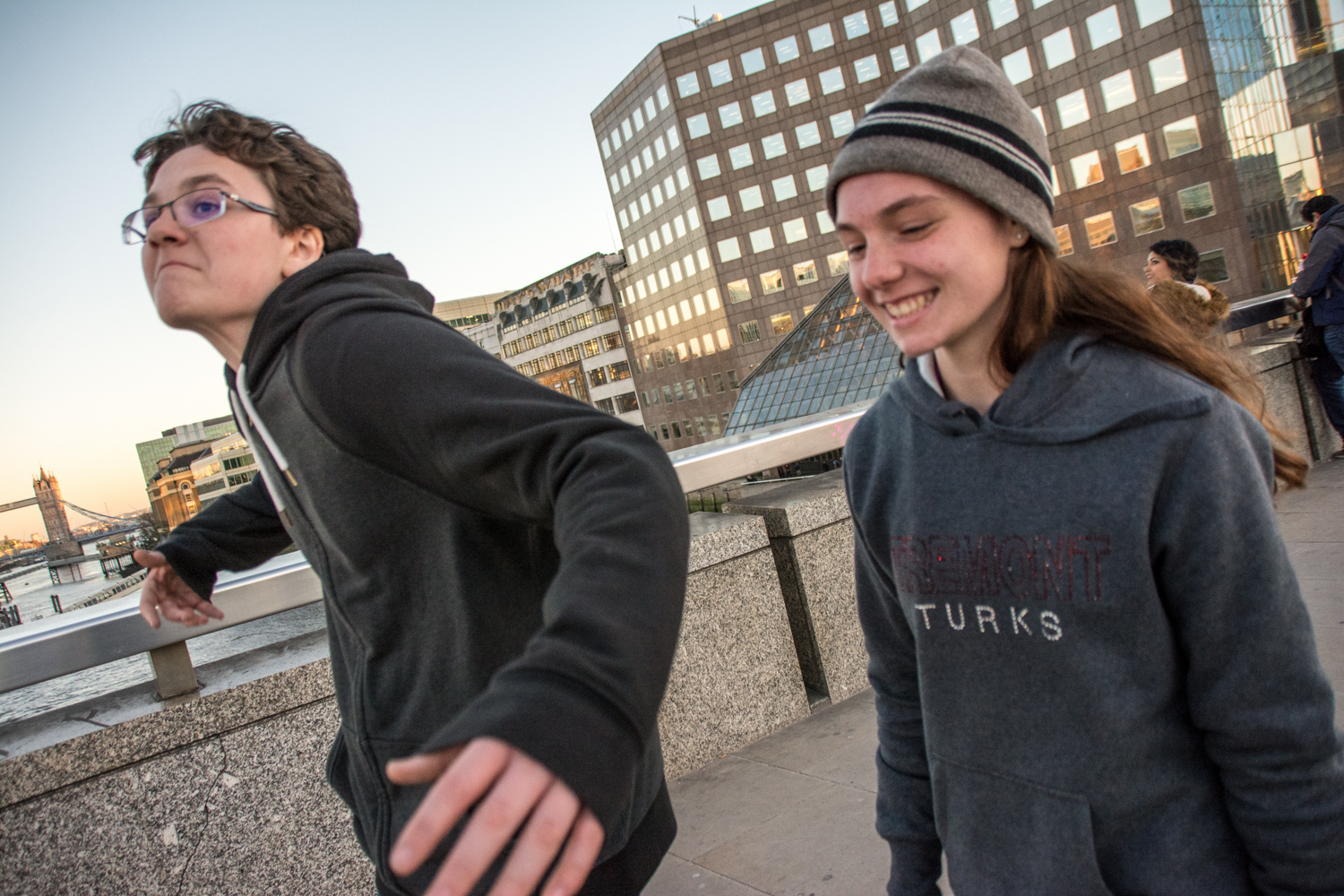 If anyone knows of a way to get a teenage boy to not make a face when a camera is in front of him, let me know 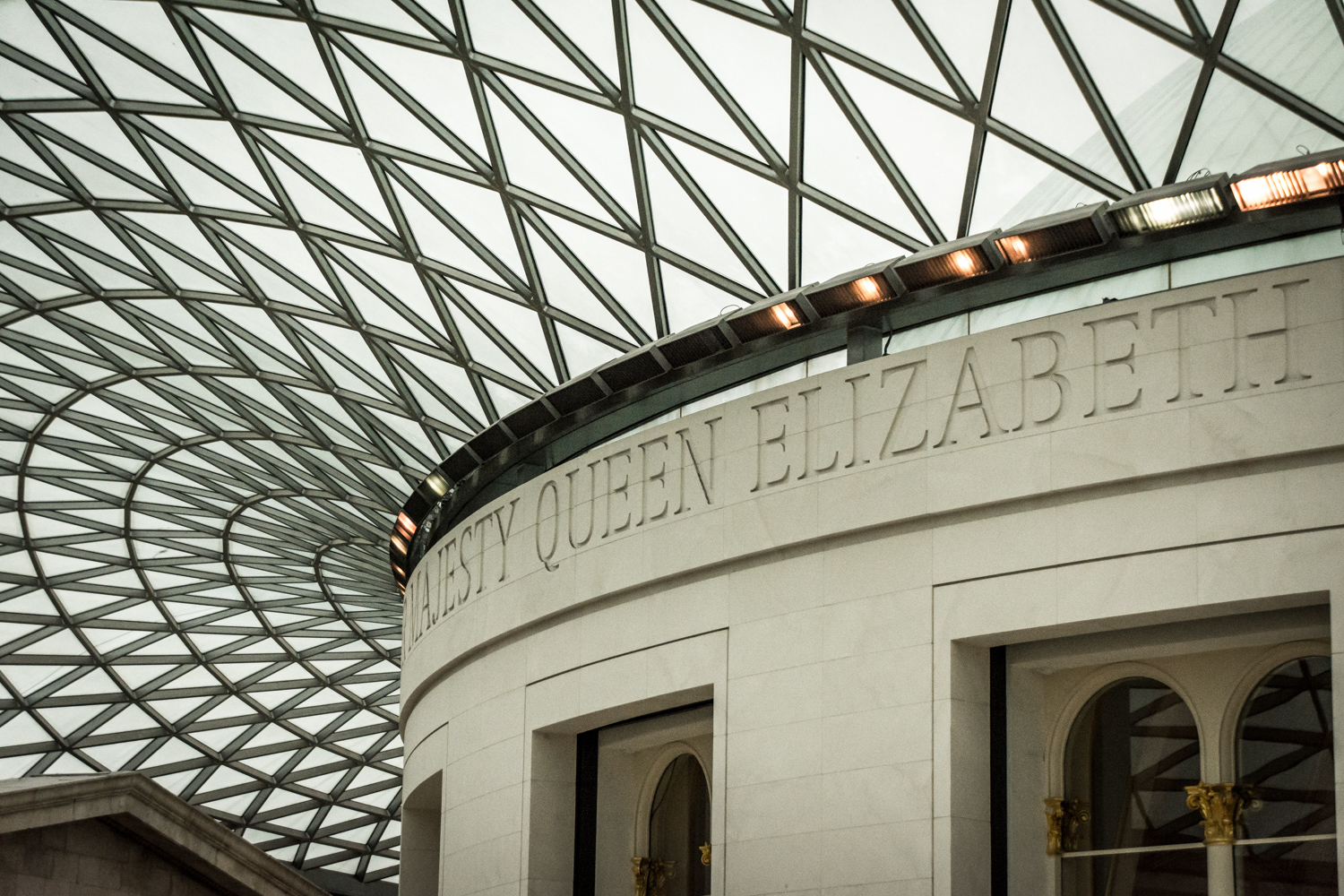 The atrium of the British Museum has a pillow shaped skylight. The abstract patterns it creates are a sight in themselves. 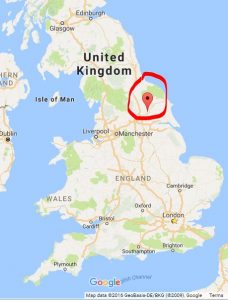 The photo above was the photo pinnacle of Day 1 in London. After a nine hour flight and endless walking to the hotel because of tube construction, I could barely stand. We retired to the hotel and the next day picked up the rental for the drive up to York.

We were loaned a GPS specifically for the UK. Our hosts thoughtfully send these to their guests before they arrive. Our first attempt to dial in their address was not getting us any where closer to the highway. I ended up driving down some very narrow residential roads in London and after several times missing something by a fraction of an inch, my wife exclaimed “We’re all going to die!” and, “Maybe we SHOULD take the train!” At that point, I guessed our GPS was not exactly set right. Sure enough, it was dialed into a street called York, not the city. We relocated the destination and headed up the M1 to York. In 2000, I had to do this using a printed map. Yes, kids, those still exist. *Shudder*. It was a four hour drive, mostly highway, but we arrived in York in the dark and in the rain. Of course, these are the two elements I try to avoid when driving there. 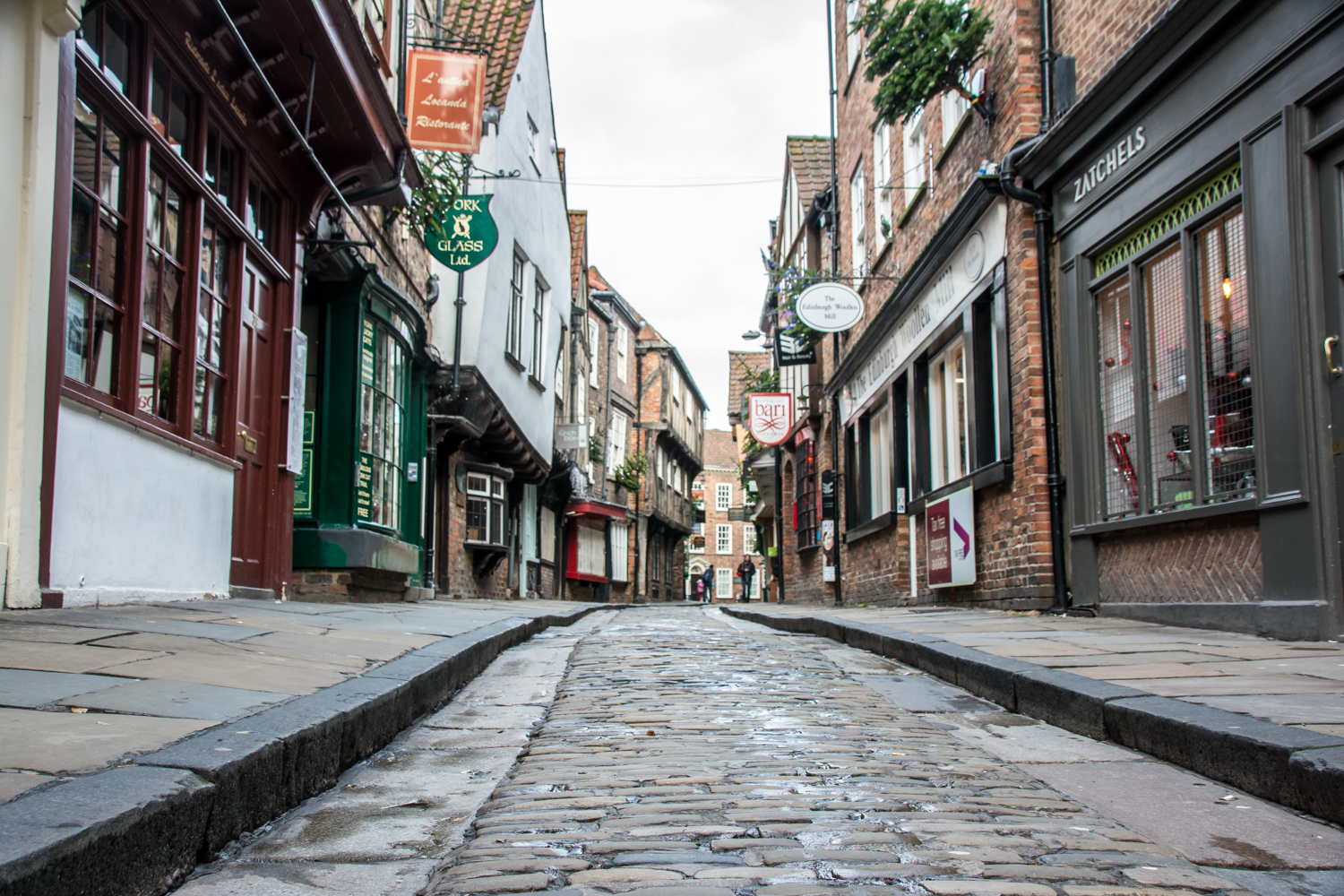 Ok, so the roads are not all THIS narrow, but sometimes it seems like it. This is “The Shambles”, “arguably the best preserved medieval street in the world. It was mentioned in the Domesday Book of William the Conqueror in 1086. Many of the buildings on the street today date back to the late fourteenth and fifteenth century (around 1350-1475).” http://www.historyofyork.org.uk/themes/medieval/the-shambles

So to get the driving jokes out of the way, here are my suggestions on driving in the UK if you’ve never done it (also applies to Australia and any country that drives on the wrong side of the road)

RULE #1: Educate yourself!
There’s this thing called the internet, use it. It contains many hilarious accounts of Americans driving in the UK, much funnier than mine.

RULE #2: Practice!
Drive around the airport parking lot like I did the first time. It helps get you acquainted to driving at lower speeds. Three, four, twenty times, however many helps.

RULE #3: Yield!
Many streets in English towns are two cars wide (some are 1.5). One lane is parking, the other is where both directions travel. Deal with it. Sometimes it’s two lanes and BOTH lanes are parking. I know that does not make sense, but the locals can do this, not you.

RULE #4: Highway exits are severe!
The max speed limit on the M1 is 70mph. The exits to the petrol stations are 30ft long. To get off at one, you need a combination of reverse jet engines and an aircraft carrier arresting cable. There is no net.

Rule #5: If you think the car you rented is big enough, get the bigger one anyway.
Yep.

Rule #6: Don’t hit anyone or anything.
The rental car place frowns on this. I’m sure they love this joke, so the first thing I said to the agent when I dropped it off was “I didn’t hit anything”. And he replied “Oh, Lovely”

Here is a video short that includes some driving clips. The first is driving out of London in the rain. The last part is a jaunt down small roads from Whitby to Robin Hood Bay on the Northern shores. Put your seat belts on and get ready for a white-knuckle ride. 🙂

Look For Your Shots “In Transit”

This blog could also be titled “How to vacation with the family and still find interesting things to photograph.” Because, let’s face it, the scenes may be new to you and the family, but how many other photos have been taken of the same things by a thousand different people? How many different shots of the Minster (below) are there? There are probably millions of shots and thousands considered spectacular. I wasn’t really going there to top that effort. Being on tour (self-guided in this case) still makes you a follower. And where the guide (or family) takes you, you go. On the way you simply keep your eyes open and hope you don’t linger so long you need to use your phone to catch up. Anything including the sky was going to be just a record shot, so my focus was down or things inside. 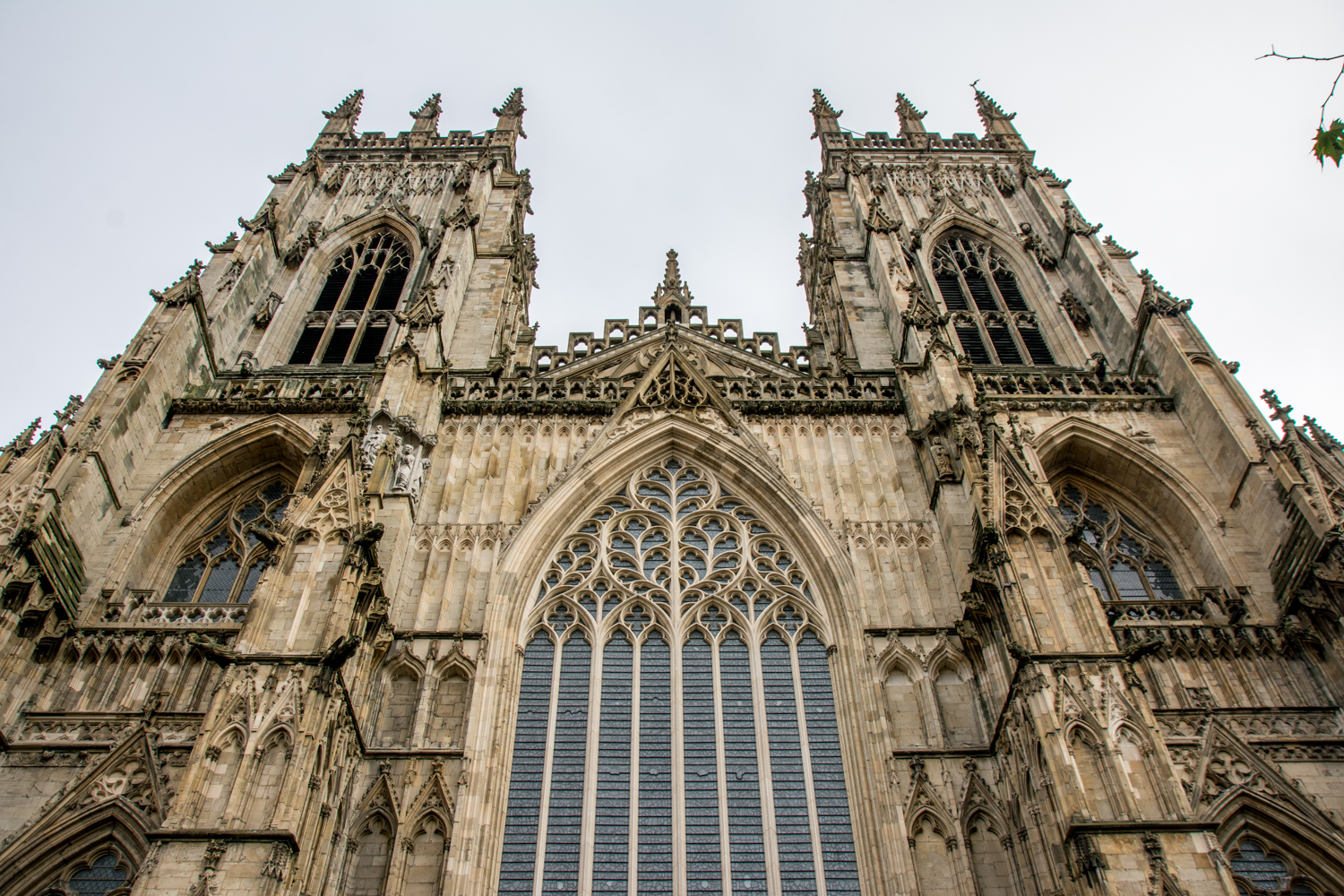 The famous York Minster. This is only the top 3/4. You can get lost in here. It’s huge.

What did we do in the past when getting separated in theme parks? When I was younger, I was separated at the Sandwich Fair in Illinois. I was put in a round, fenced in area with all the other disaffected youths until my family came looking for me. That sucked. Not so much because I was all alone in a strange place and I didn’t know if I would ever be found, but because it happened this Summer. But I’m a big boy now and I told my family if I fell behind not to wait for me. I would catch up. The scene kind of looked like this… 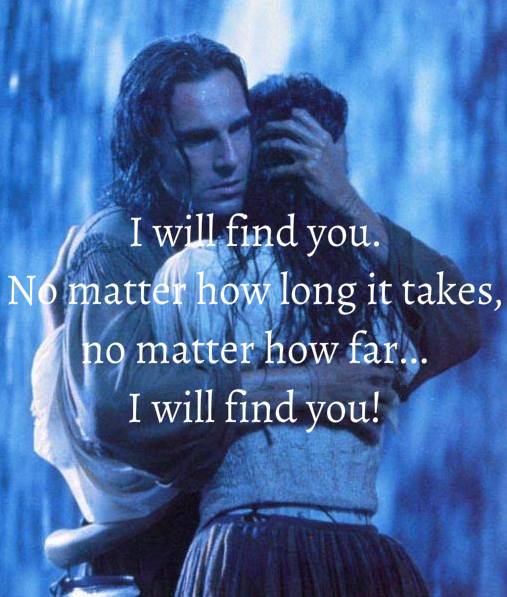 Seriously, who knew that they would listen to me? Even so, there was always one of my kids who came back to make sure I didn’t get left behind. In that respect, our family became stretched, but we never lost each other. Had I lost them permanently I’m sure I could have survived the next couple hours at least.

While in York, we stayed with a couple of my wife’s old friends in a beautiful three story townhouse. I was looking to get a shot that would epitomize the English vibe and I think I got it. The dog is named Bunny. Bunny is a good dog, aren’t you, Bunny? Good Bunny. 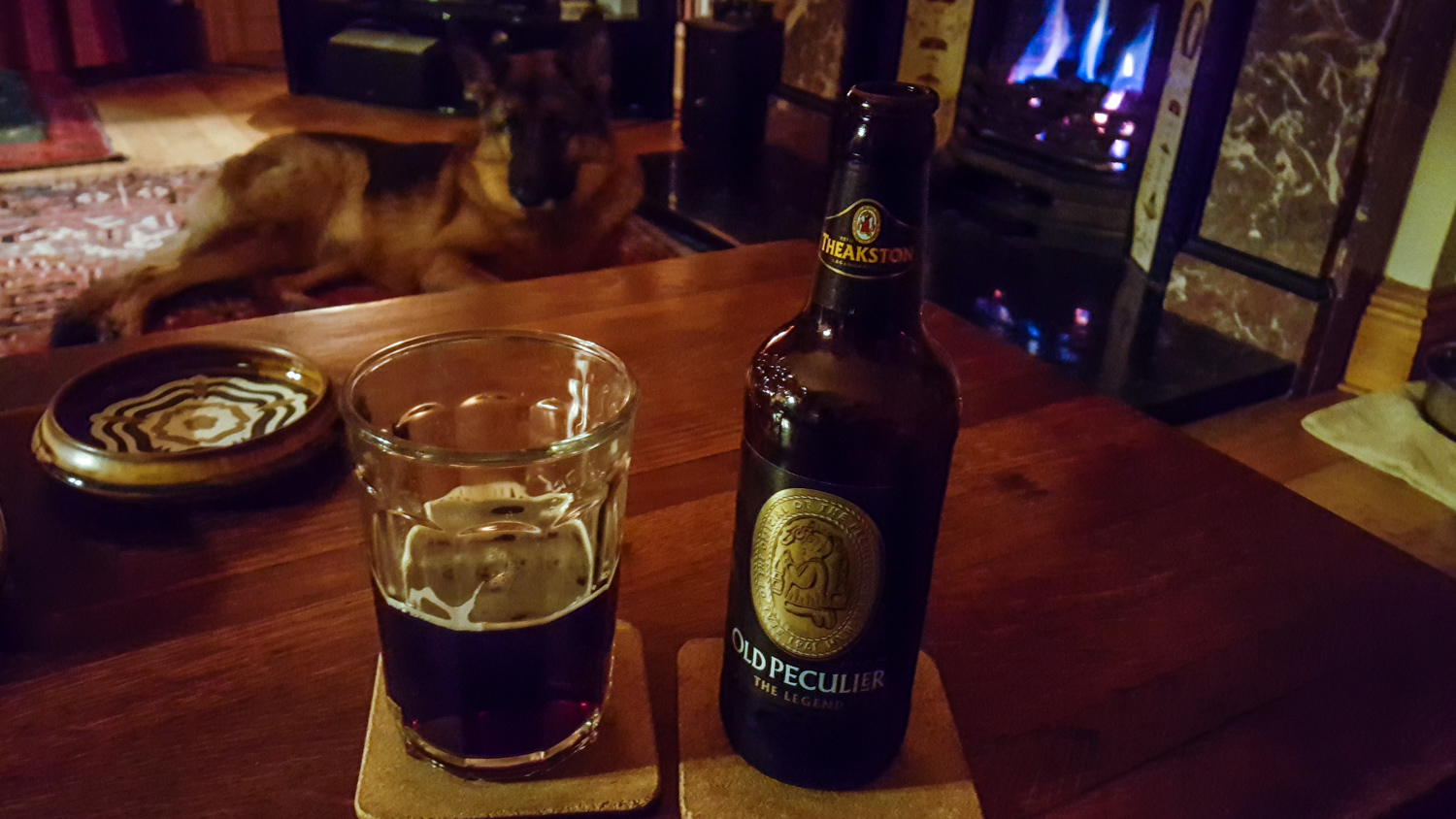 Shoot While They Sleep

Want to get out on your own once in a while? Get up before sunrise and find a good location that could get nice light. There are at least 3-4 hours of uninterrupted shooting hours while they snooze. And sometimes you meet interesting people. While I was photographing the Minster from the medieval wall that surrounds it, a Japanese film crew walked up and started interviewing me about it. I got the impression he really didn’t understand the questions he was asking, but was just looking for sound bites that they could use to make fun of me in Japan. Sometimes I am so bewildered by an event, I forget I have a camera. That just doesn’t happen every day. I’m sure this is probably why there are no aliens on film yet. Or did I get one below? 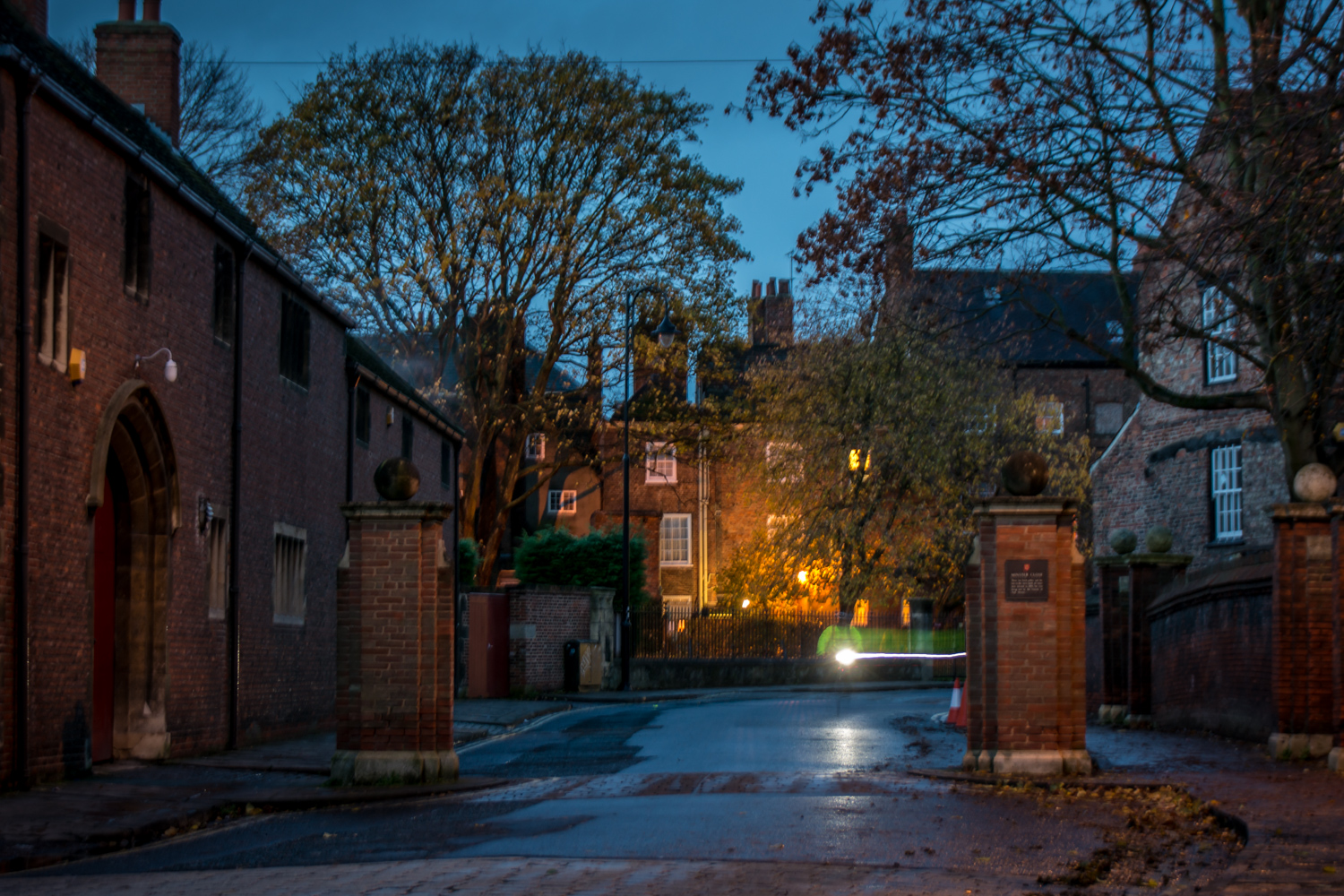 While waiting for the sun to rise, I watched people riding to their jobs down Deangate 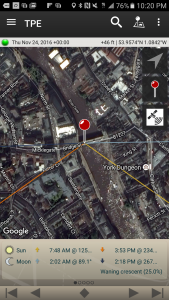 In the mosaic below, I started pre-sunrise near the Minster and then started walking around. I checked PhotoEphemeris and started lining up locations that might make for a good sunrise and found myself camped out on the bridge on Bridge St on the River Ouse looking southeast. Although the clouds did start to finally break, I almost met my vision for the shot. But I got to talk with a few people while hanging out there. Always fun even when you don’t meet your own expectations. The rest of the shots in that mosaic were taken “in transit”. If you want to know more about each shot, click on one and read the captions.

So, What did I learn?

>>> Continue to Part 2: A Whitby Thanksgiving, Vampires, and a Seagull Says “Git inna me belly!”

2 thoughts on “Focus Trek #10 – Part 1: A Yankee’s Guide to Driving (and vacation Photography) in Britain”