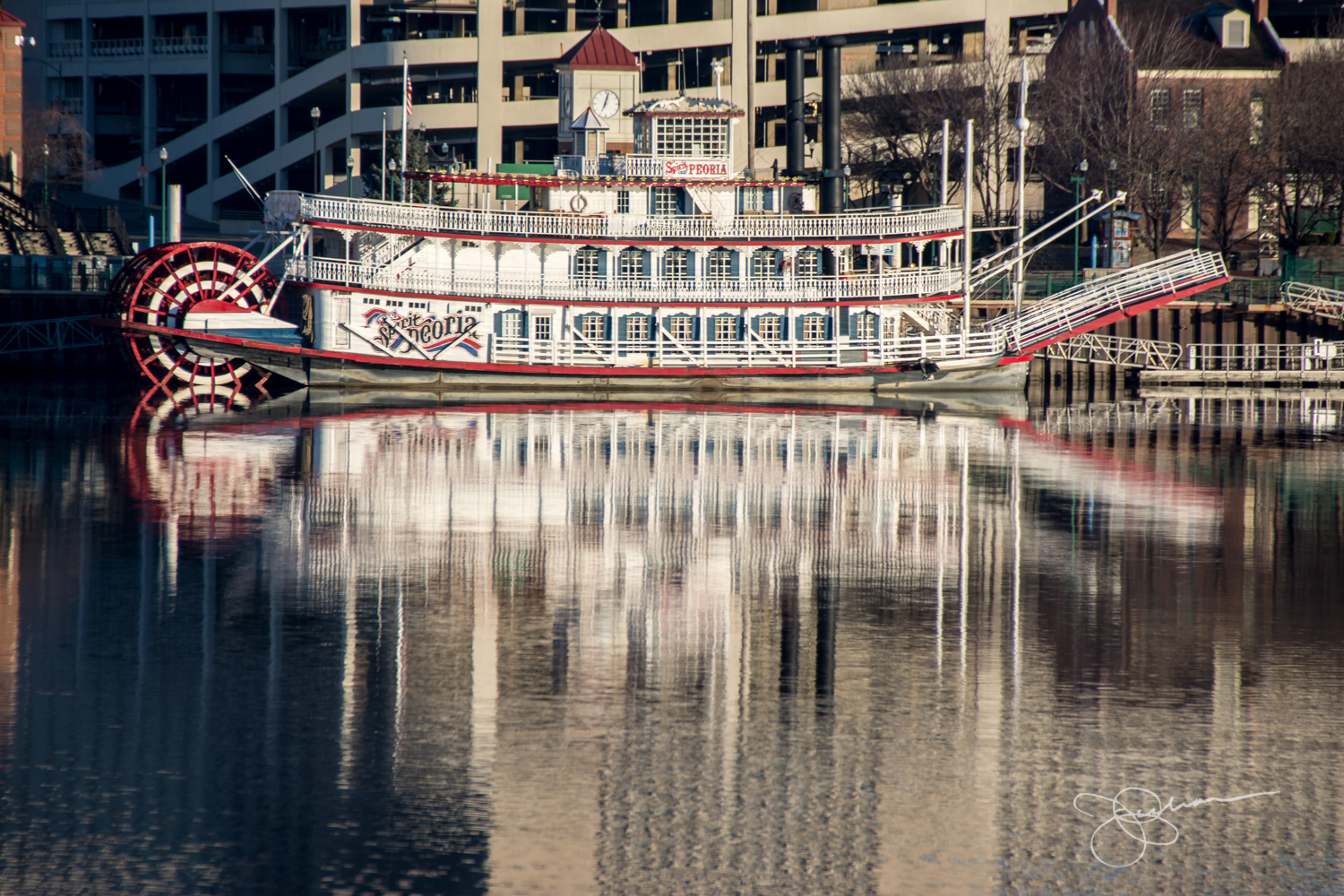 As a member of the Peoria Camera Club, I get the opportunity to meet some very gifted photographers not only within the club, but from outside as well. We invite speakers every year to keynote our seminar and in the last few years I’ve met people like Bill Fortney, whose book “America from 500 Feet” was how it was done before drones. I saw Moose Peterson in Cedar Rapids, and before Rick Sammon was our speaker in 2016, I met him on an outing during the Telluride Photo Festival in Colorado along with Michael Clark (see Focus Trek #5). Separate from the club, I also shot with Jim Caldwell and Dick Kettlewell at the Black Hills Photo Shootout (See Focus Trek #9). 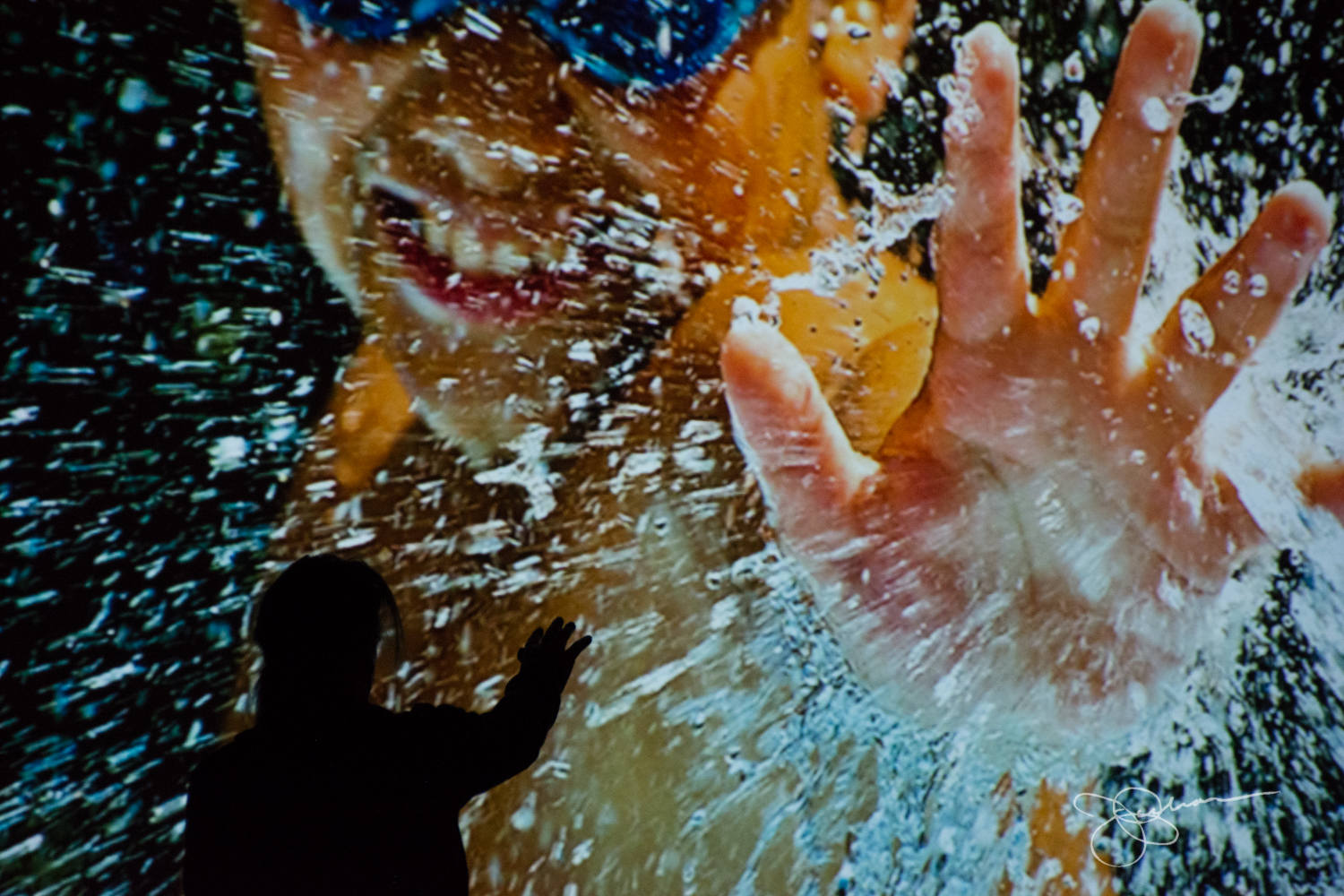 All these people run photo workshops, and although they all have vastly different personalities and styles when it comes to photography, they all share some common traits.

When I joined the Peoria Camera Club back in 2014, I noticed that nobody was in the habit of documenting the club’s events. I started with Bill Fortney’s seminar and on normal outings I will hang back and take some photos of the club in action. I see a lot of what we all take pictures of, but there is also a story in taking the photo. 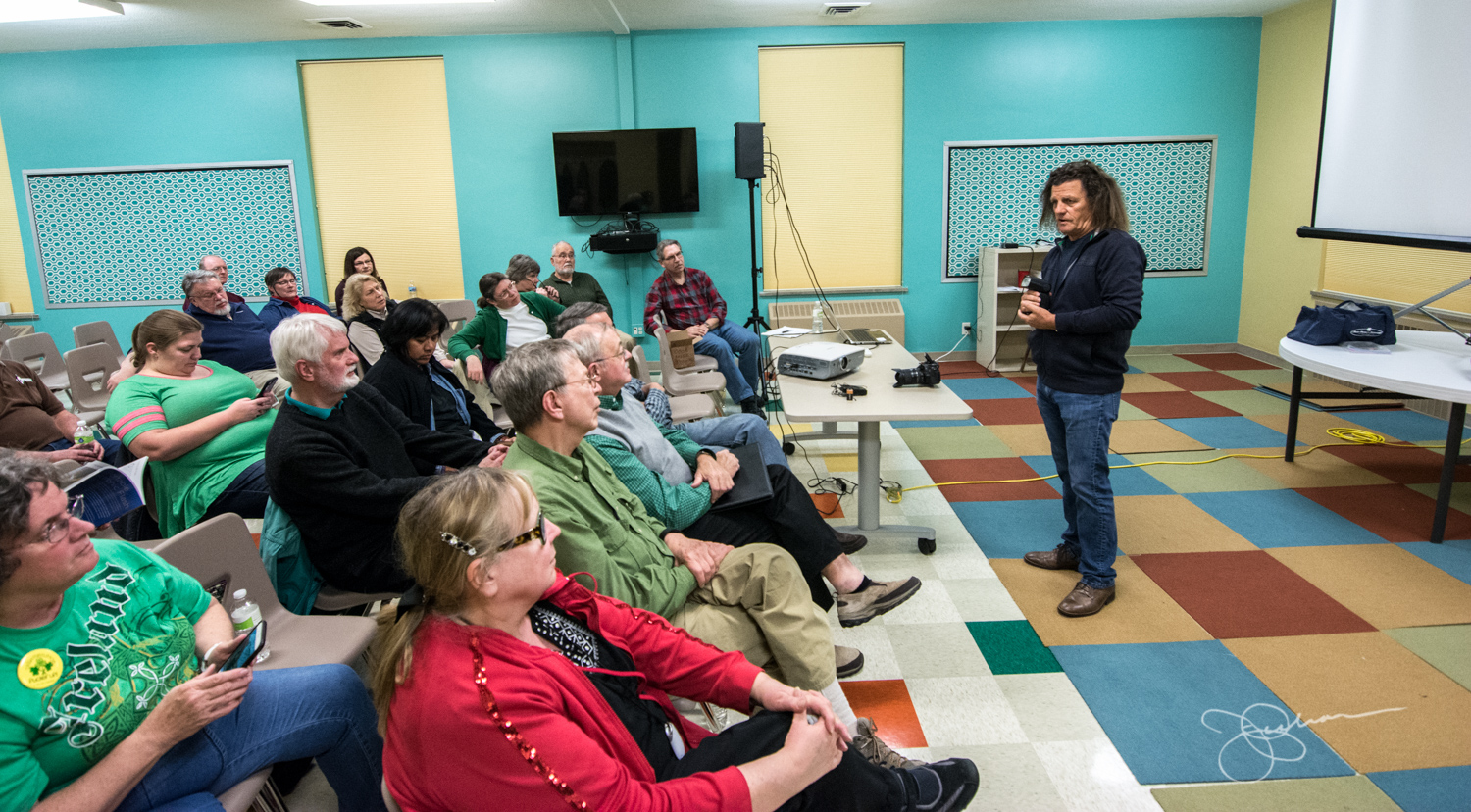 That is a great deal of what Bryan’s theme was, “How did I get this shot?”, “Well, it’s a lot simpler than you think!”. Then, he would accompany some of his photos with the “big” picture, including the people in his workshop in the scene. Bryan isn’t shy about staging photos, but in his opinion, if it looks staged, you failed in some way. Stage it, but don’t make it look staged. Rearrange stuff to fit your vision and composition, but don’t make it look like you moved stuff. 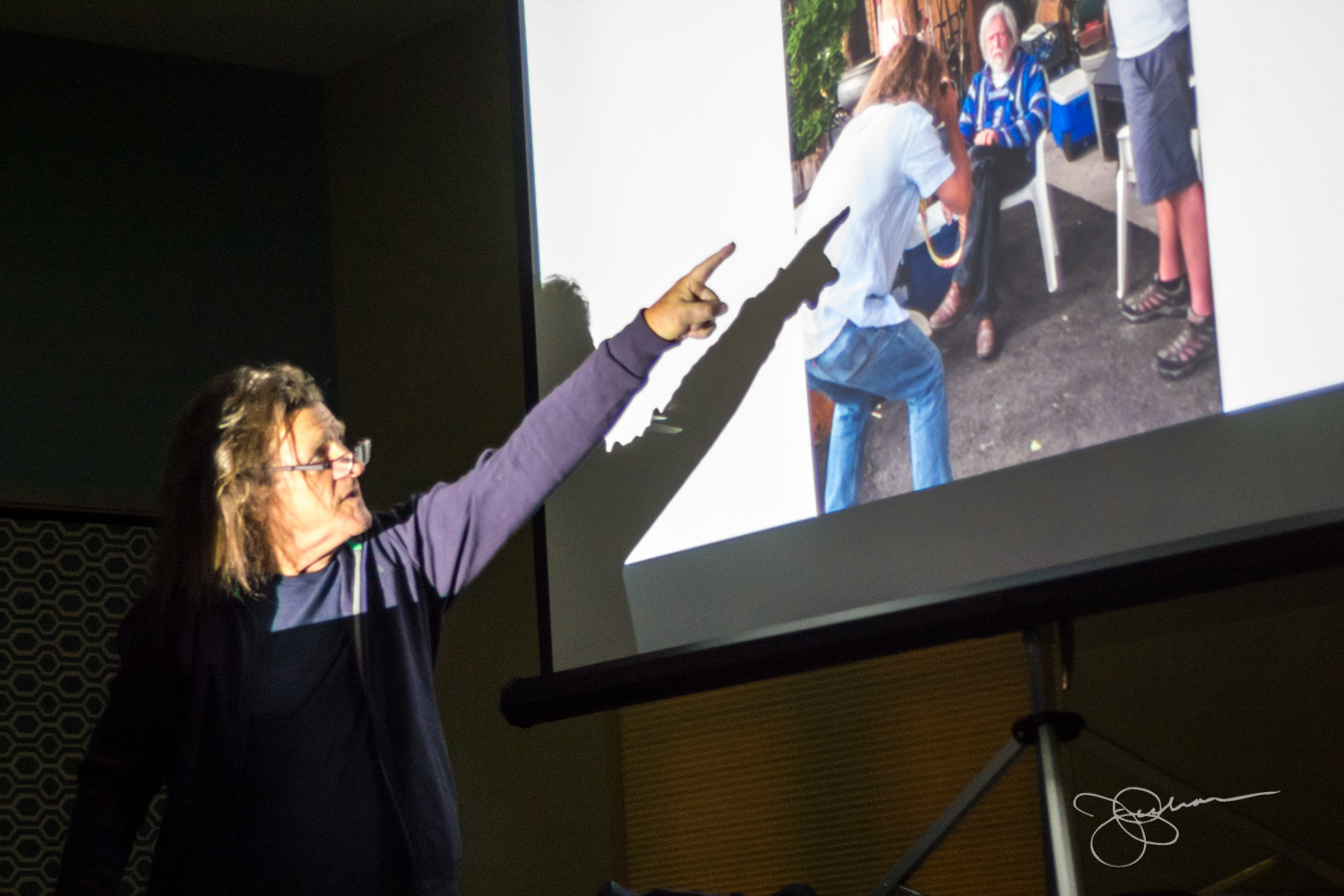 I’ve said this in other articles, I love to hear the story behind the shot. How the photographer got to that point is just as important as the decisions made after that point. What was the original vision, what decisions did they make based on the circumstance, what failures caused reinvention of that original vision. Good photographs are rarely dumped in your lap, the front-end work on some projects is substantial. 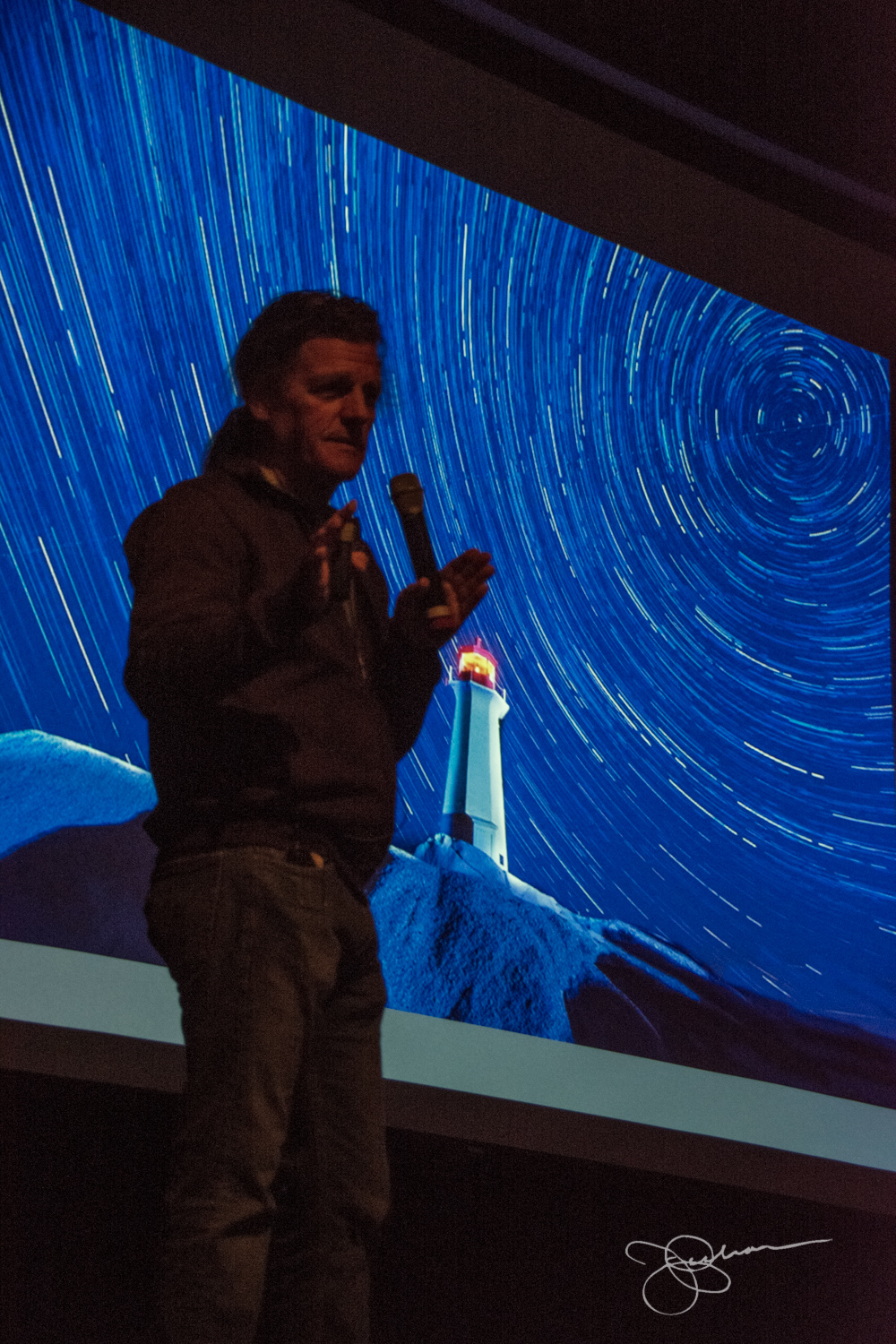 Bryan’s Saturday seminar was all about creatively “seeing”, not so much what is there, but the possibility that something could be added to complete the scene. “Really, it’s OK to move stuff around, as long as the shot doesn’t appear as if you moved stuff around”. Shoot, recompose, shoot, take horizontals and verticals. Verticals because you completely change the emotion of a scene by changing the aspect. And never know when you might be considered for a magazine cover.

Sunday was our opportunity to go out and shoot with Bryan. Originally I wondered where we were going to go that would prove interesting enough for him. He shoots in places like New York and Chicago as well as India and Iceland. We are simply Peoria. But it turns out that didn’t matter. A morning meetup at the East Peoria Riverfront park had some “Love Locks”. I saw these last Fall over the Brooklyn Bridge. I shot some with my phone a couple weeks ago at sunset.

After that we walked down the alley in the Warehouse District and then back up Washington St. In the afternoon we headed up to Chillicothe to the historic downtown area. Needless to say, he was comfortable with ALL this.

Behind the Thyme Kitchen, he had Ron, who had the only shoes with some color, walk up and down the stairs as we shot. Then, he crawled under a metal grate stairway and had one of the group cast shadows on the wall as confused workers came out for their breaks. 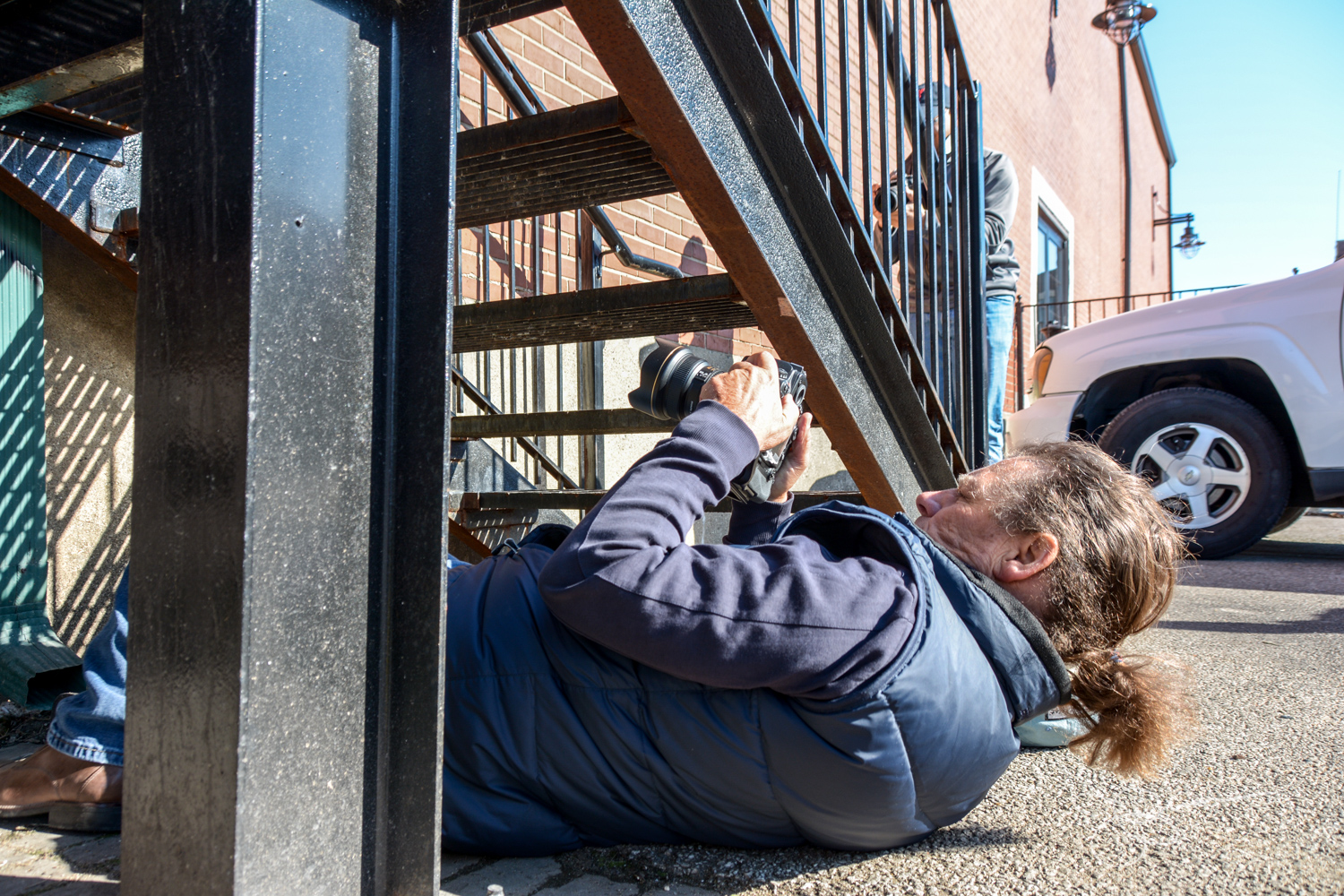 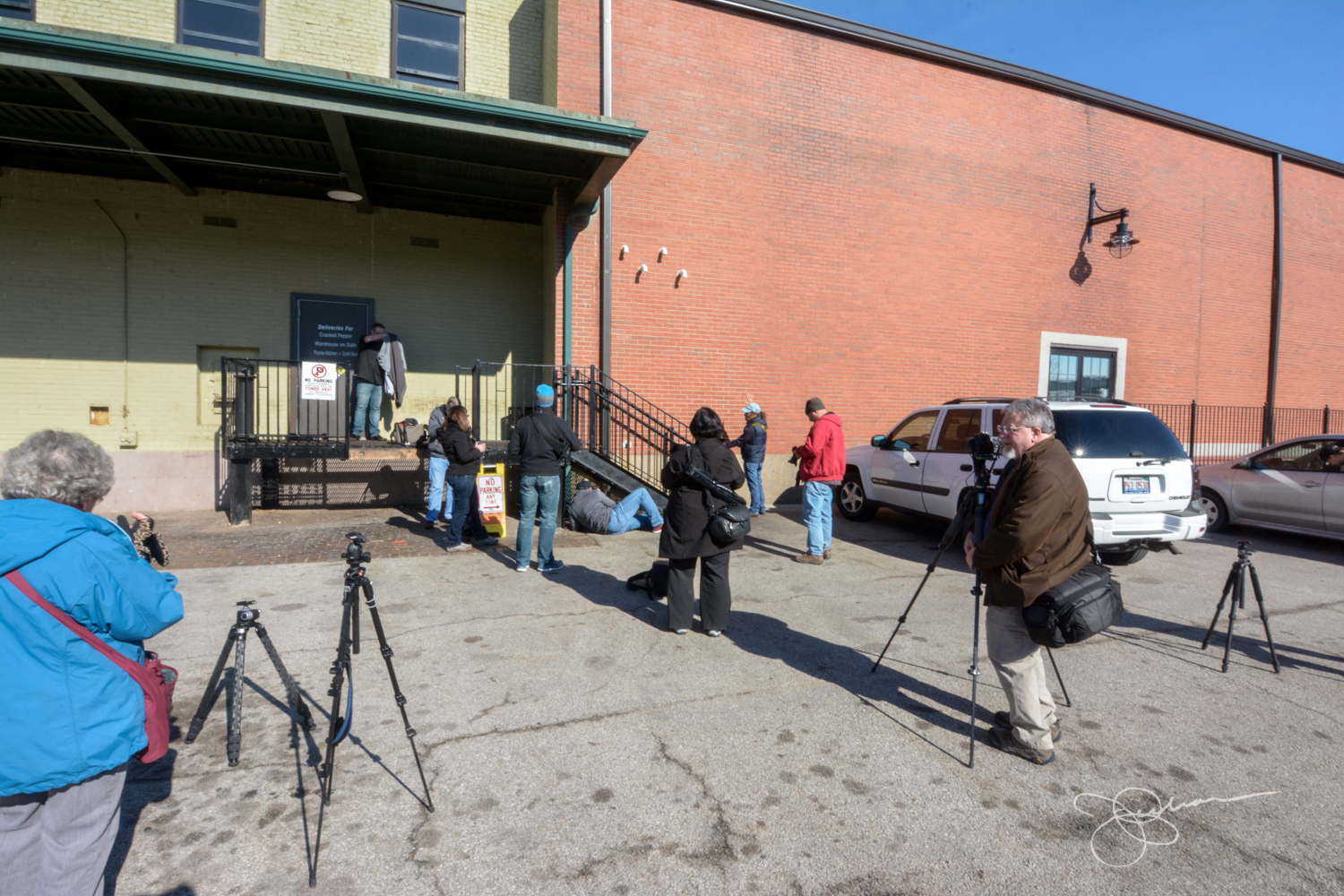 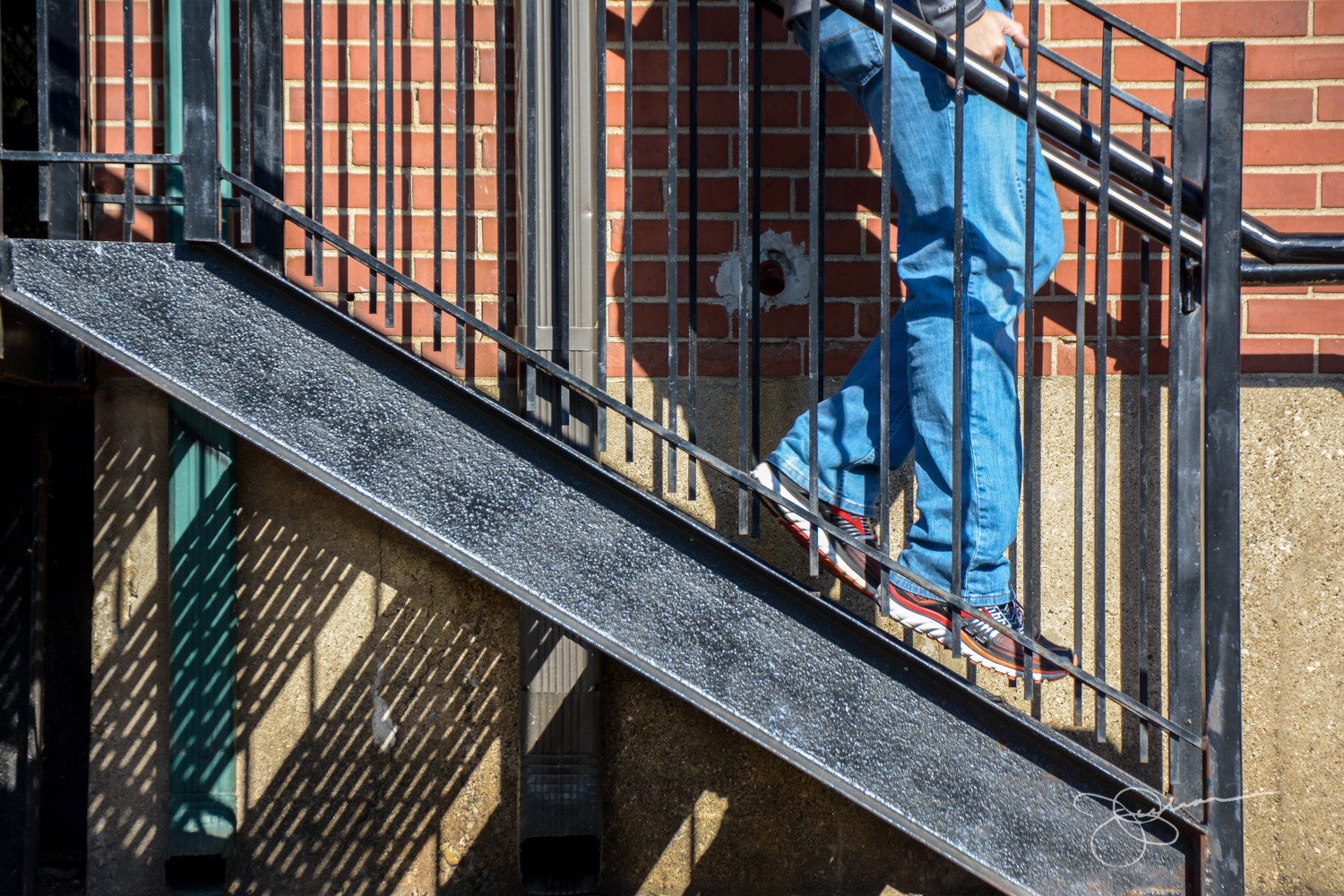 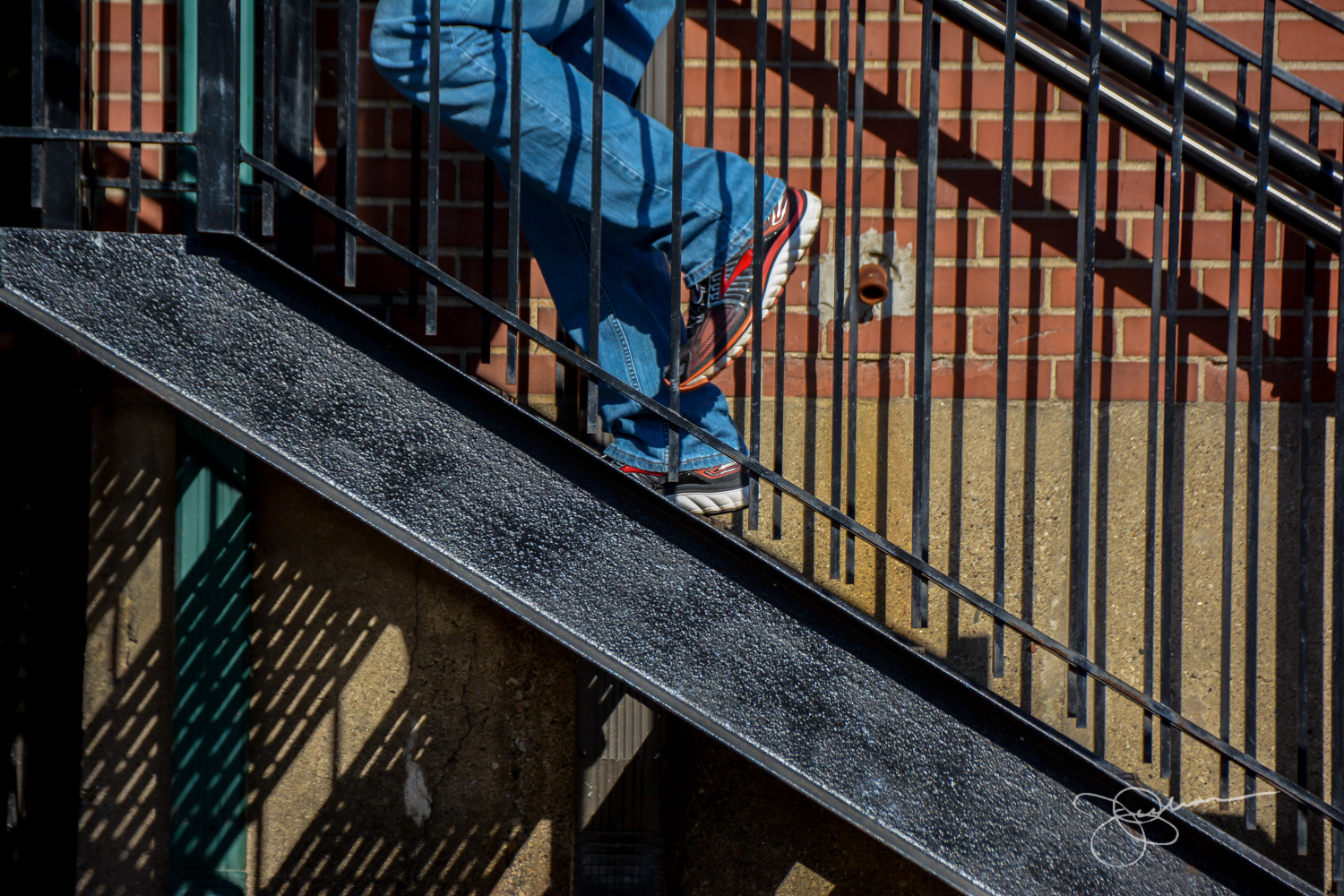 A little pop (or a lot) of color. But not just any color. Complimentary, Analogous or Triad colors should be sought out and emphasized. Can’t find them naturally? You can always find your location with one color and buy a shirt or sweater with a complimentary shade. Luckily, we had a couple people wearing red. And red is Bryan’s favorite one to pick on. If you go to one of his workshops wearing red, you will be modelling. 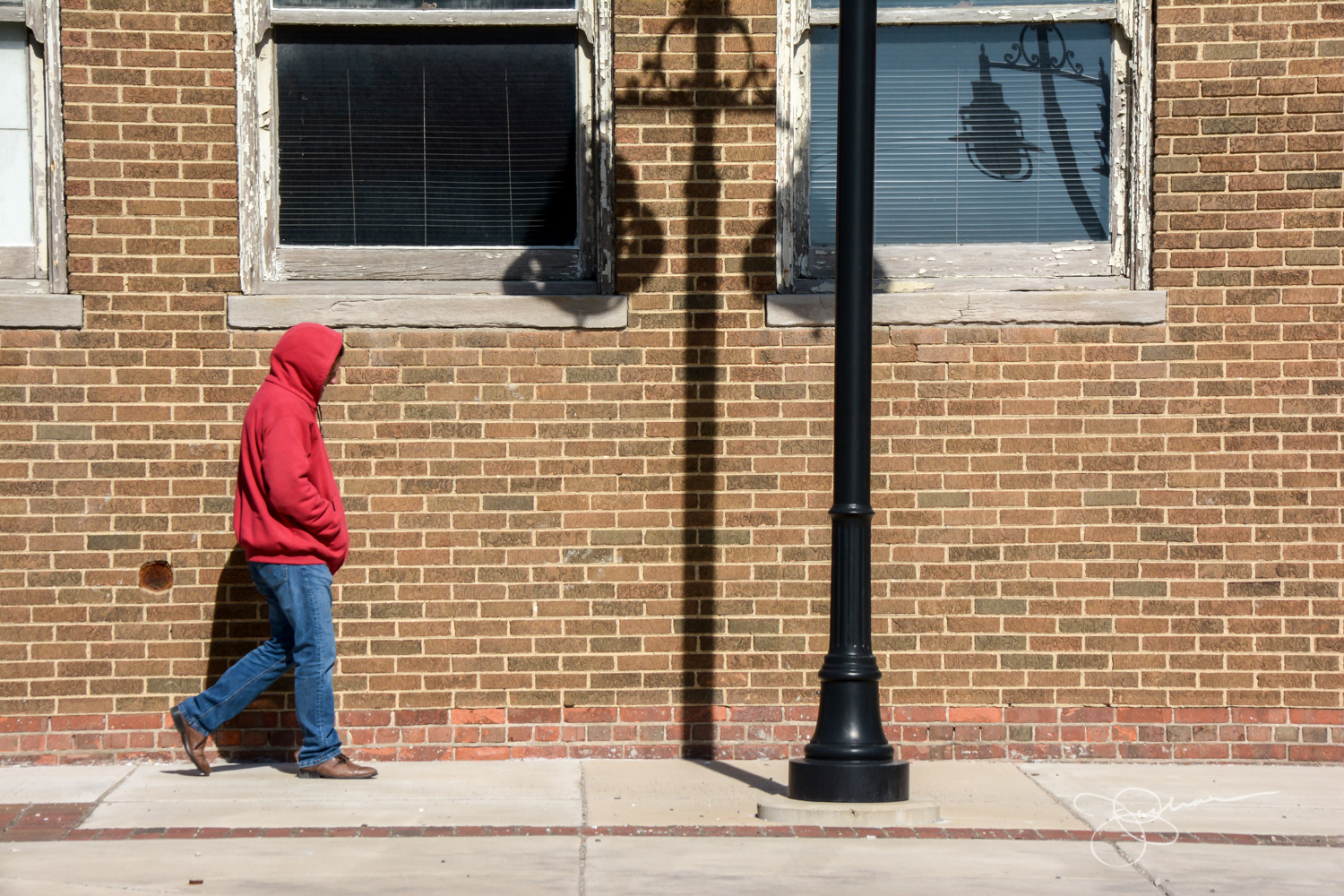 Here, I was wearing someone else’s sweater, but Bryan was gracious enough to grab my camera and fire off some frames. 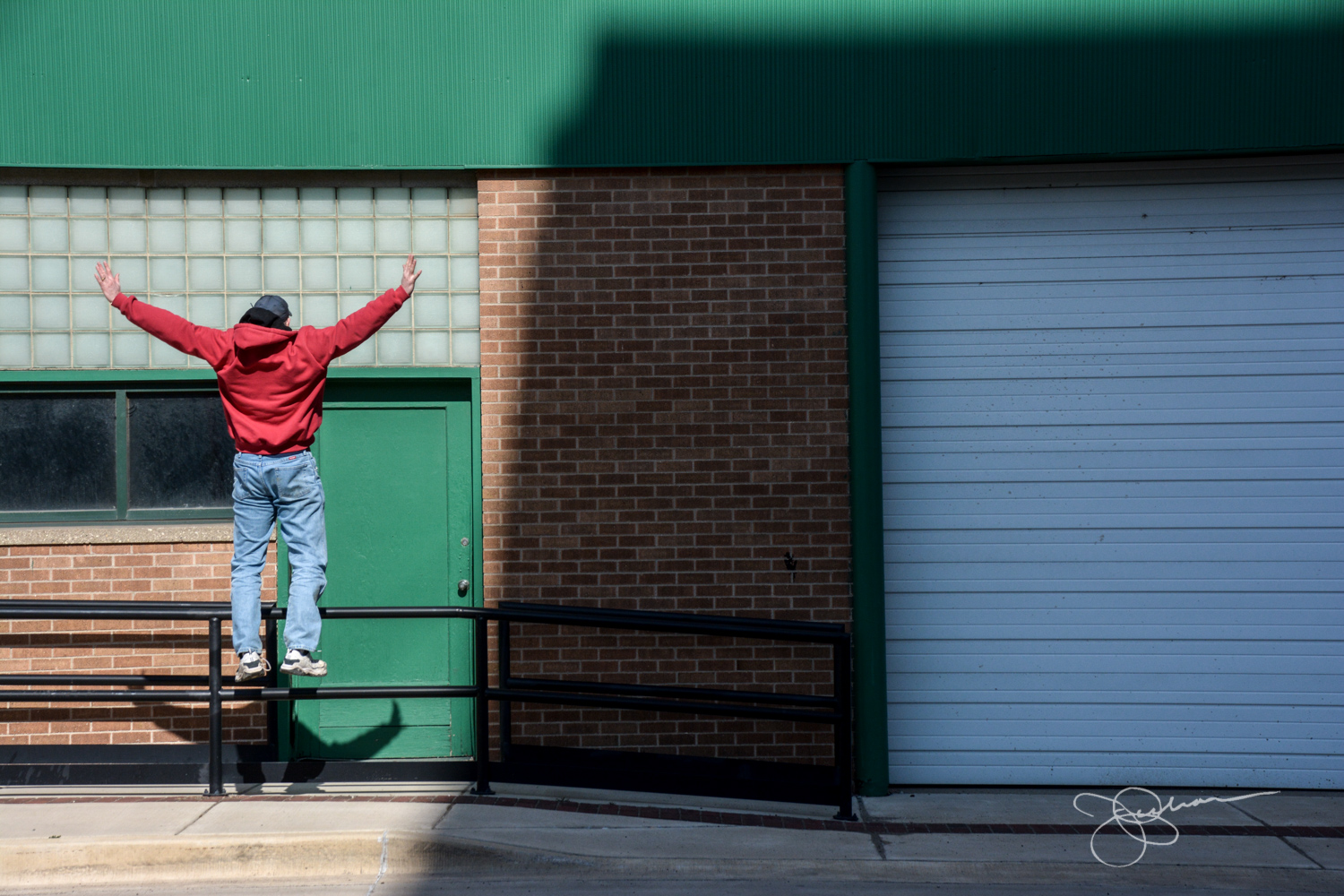 We also had a contest to take a macro. We had four abandoned vehicles to use as our models. There are photos everywhere, you just have to find them.

A trip up to old downtown Chillicothe also proved interesting. No lack of interesting shots there. Here, Bryan is jumping to grab onto the shadow of the fire escape. 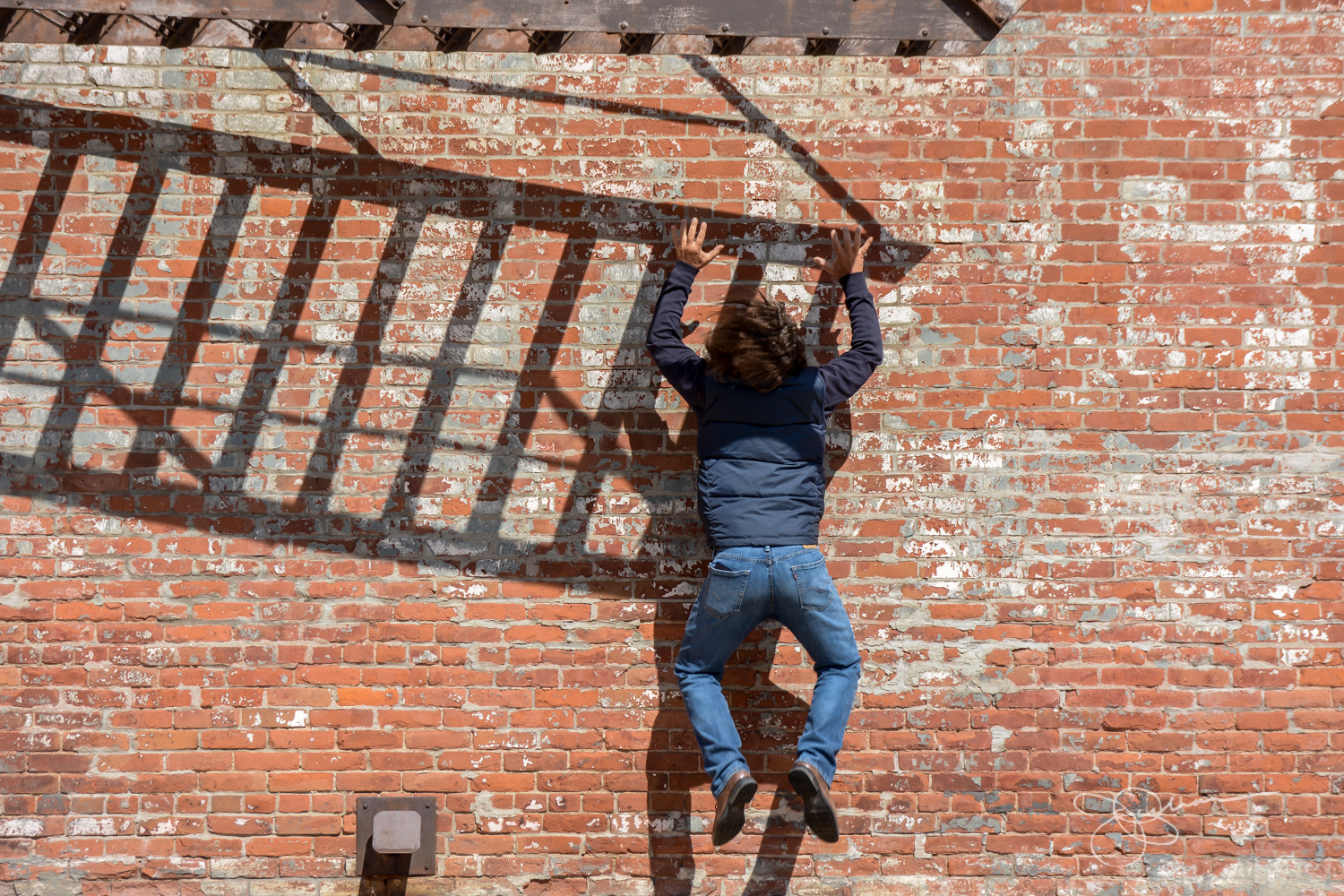 As was the case many times that day, Bryan yelled out, “I got the shot”. Set your cameras at this shutter speed, this ISO and wide open, and I’m going to throw my head up under this sign, ready? Here we go!” 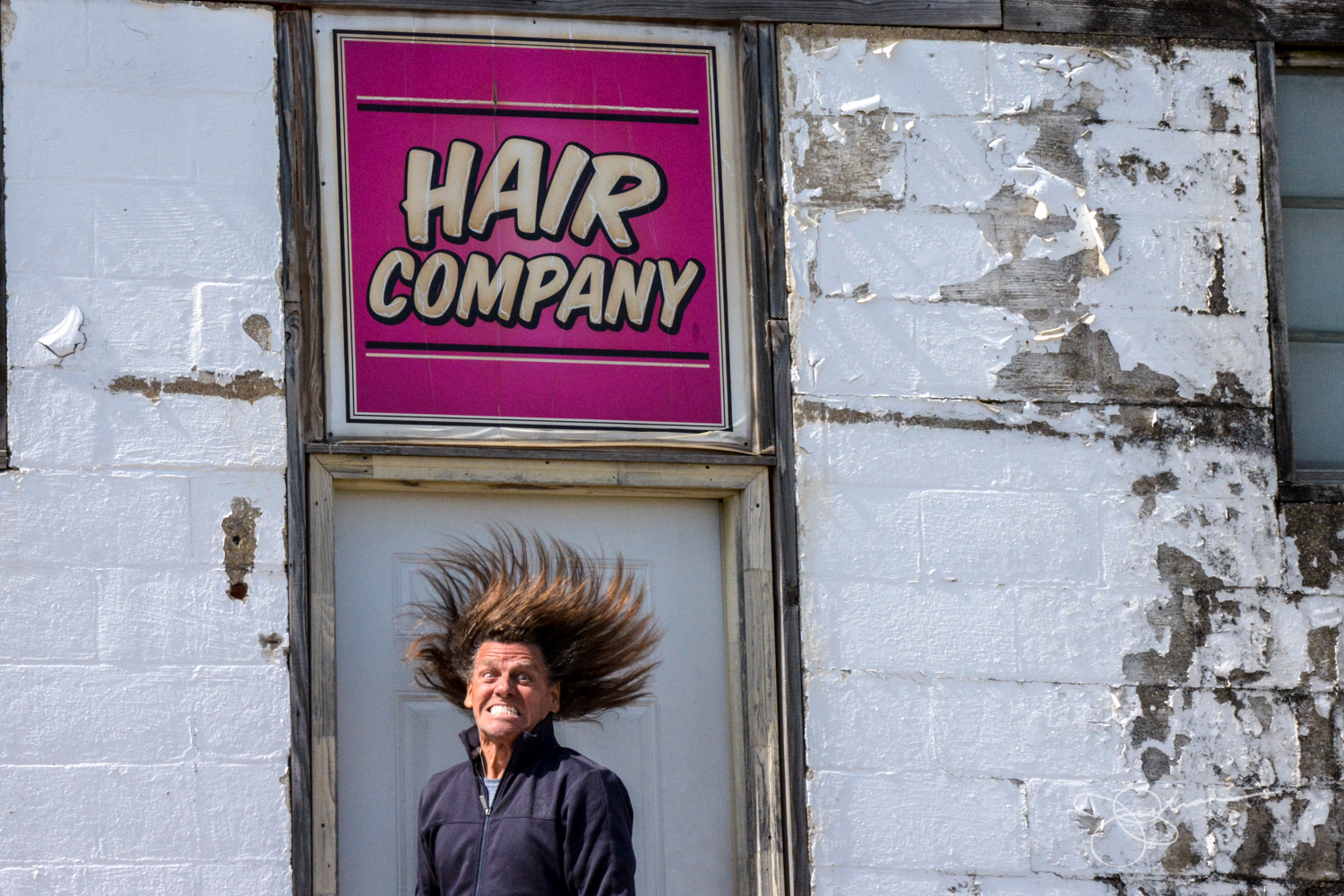 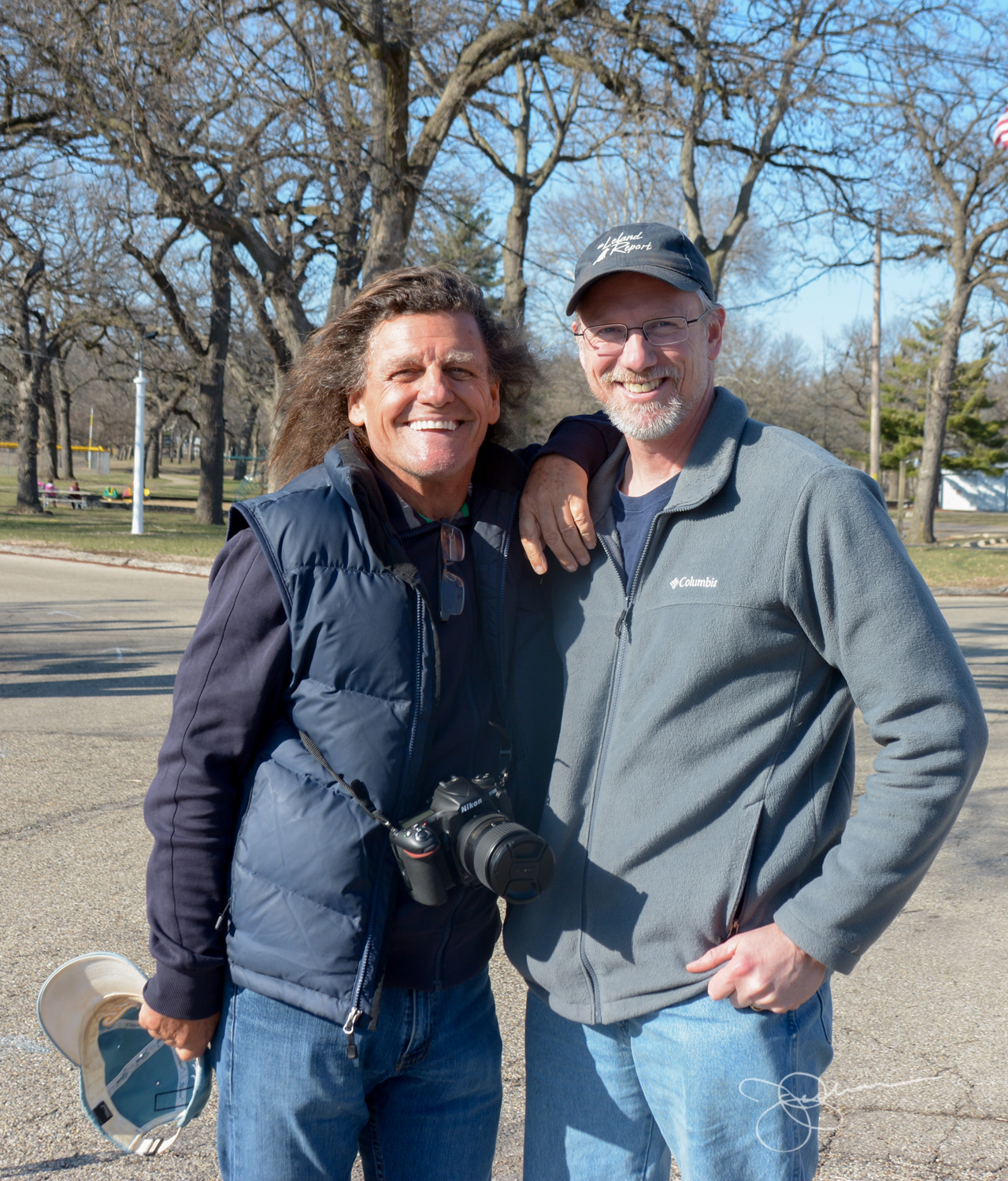 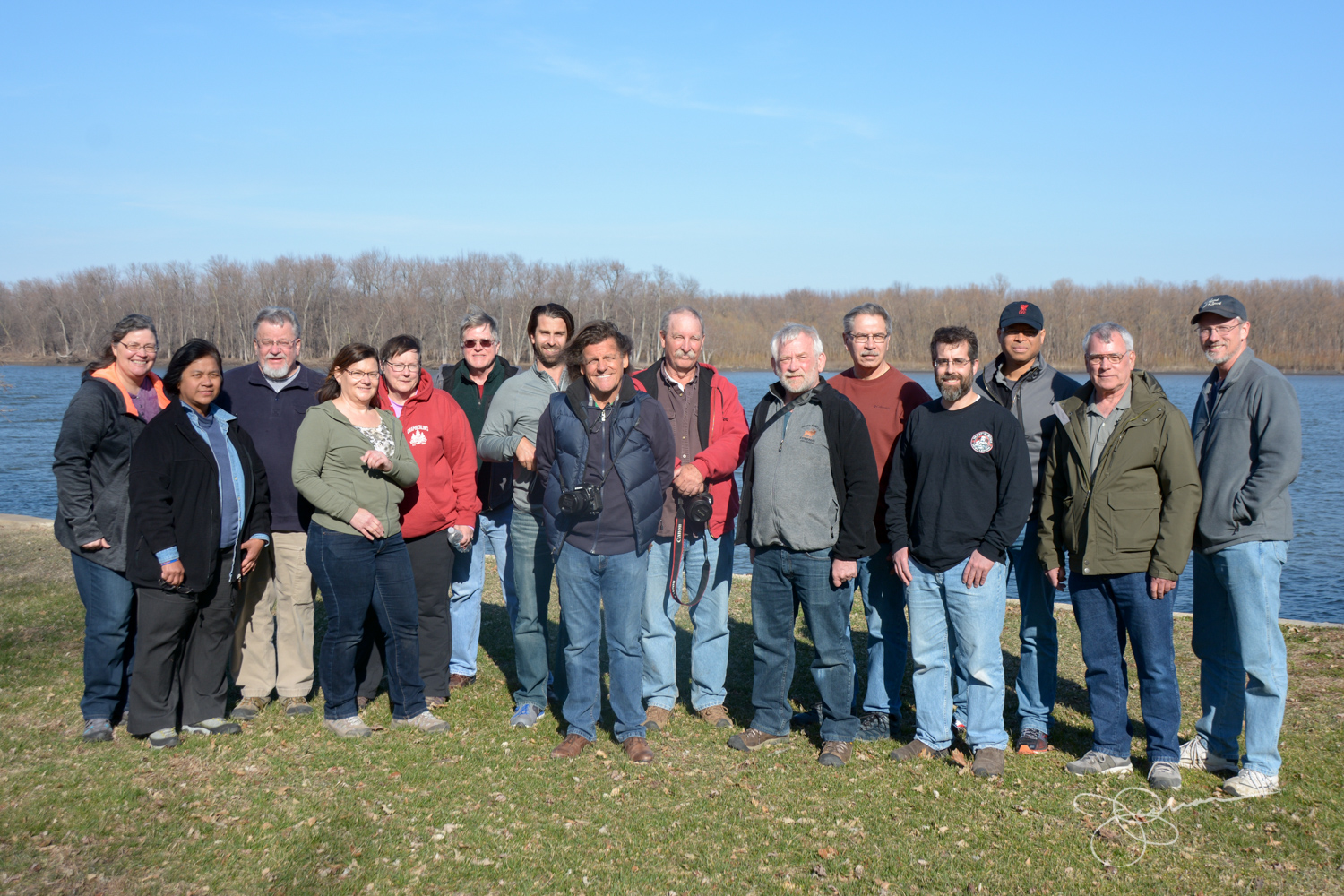 Overall a memorable experience. If you get a chance to go out shooting with Bryan (bryanfpetersonphotoworkshops.com), make sure you wear something red. But a warning: he might be wearing it at some point. He also has a new site, youkeepshooting.com, that has online courses. And if you have not already done so, look up your local camera club. Odds are good that they offer experiences like this with interesting and experienced photographers.

Now, go out and “expose” yourselves!