On this day seven years ago, a half-mile wide F4 tornado cut a 46 mile path through central Illinois. Moving an average of 57 mph, it touched down in East Peoria and lifted near Long Point in Livingston County. With the danger over in our area and not knowing what had happened just North of us, I packed my camera in my car and set out to the South to find some weather shots. I experienced some straight line winds, but nothing too extreme. I eventually made my way up north where the clouds were more picturesque and started photographing an abandoned farm house a half-mile East of Washington. 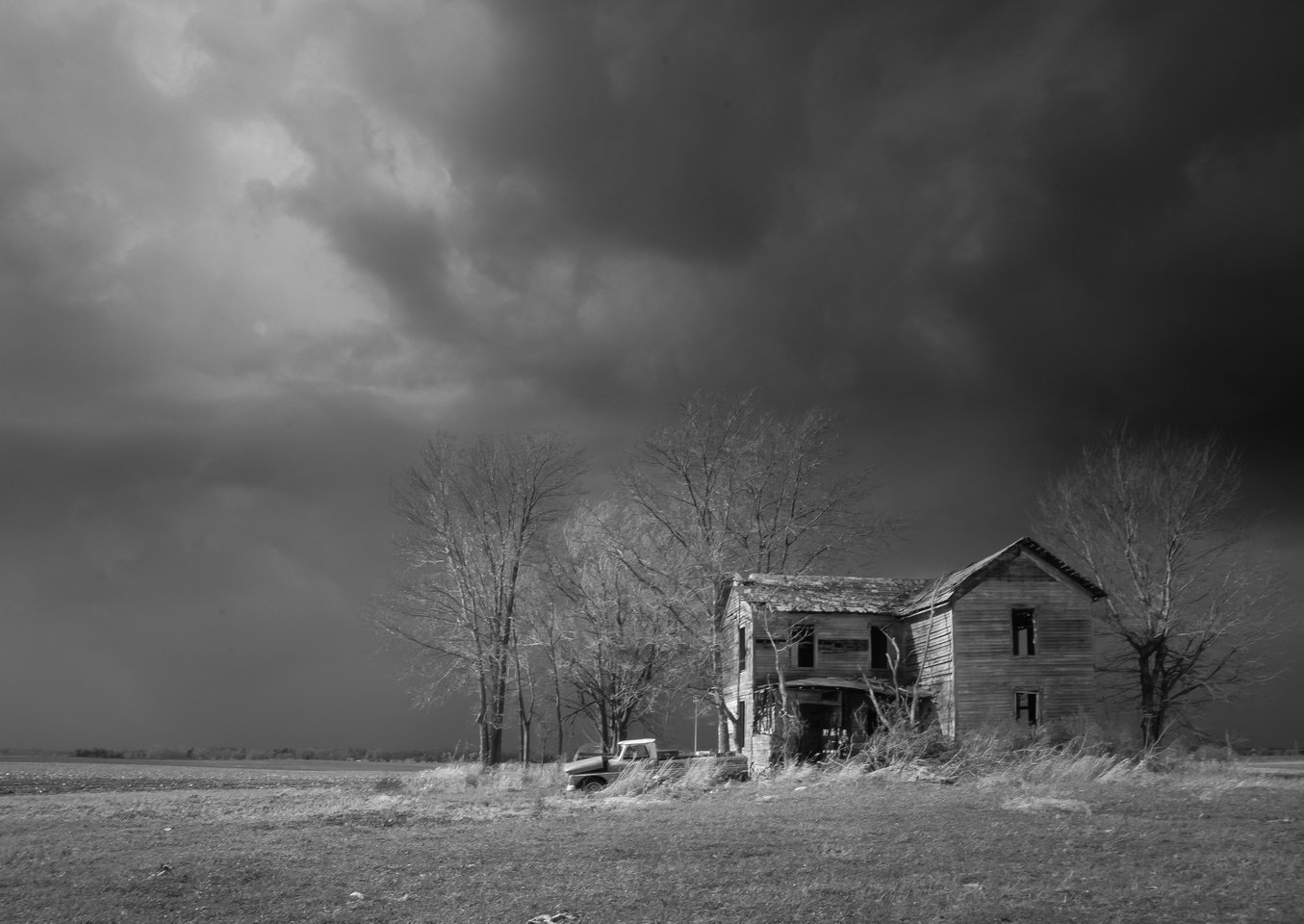 At some point, a corvette came racing up from the South took a left onto Eureka Rd, and continued to race into town. I didn’t think anything of it at the time, but soon after that, a firetruck raced down Eureka Rd from the East and I figured that something must be wrong in town. I got in my car and followed the firetruck. But when we got into town, it went to the fire station, and having not seen anything obviously wrong other than normal storm damage, I decided to head home down Washington Rd. On the way back to Tremont, I got a call from my sister.

Her: “A tornado just went through Washington, I just heard on the radio, is everyone ok?”

Me: “I was literally just up there and only saw a firetruck, nothing serious”

Her “They said it went through the West side.”

Having only been on the East side and seeing nothing, I never thought to keep moving West, where I completely missed the devastation. I drove back up to find the main roads to the West blocked so I came in from the South and parked across the street. Here are select shots from a walk I took up the middle of the tornado path starting at the block between Gilman and Jefferson Streets on Route 8. At the end of this article is a video I created using Google Earth showing the before and after in a fly-over. 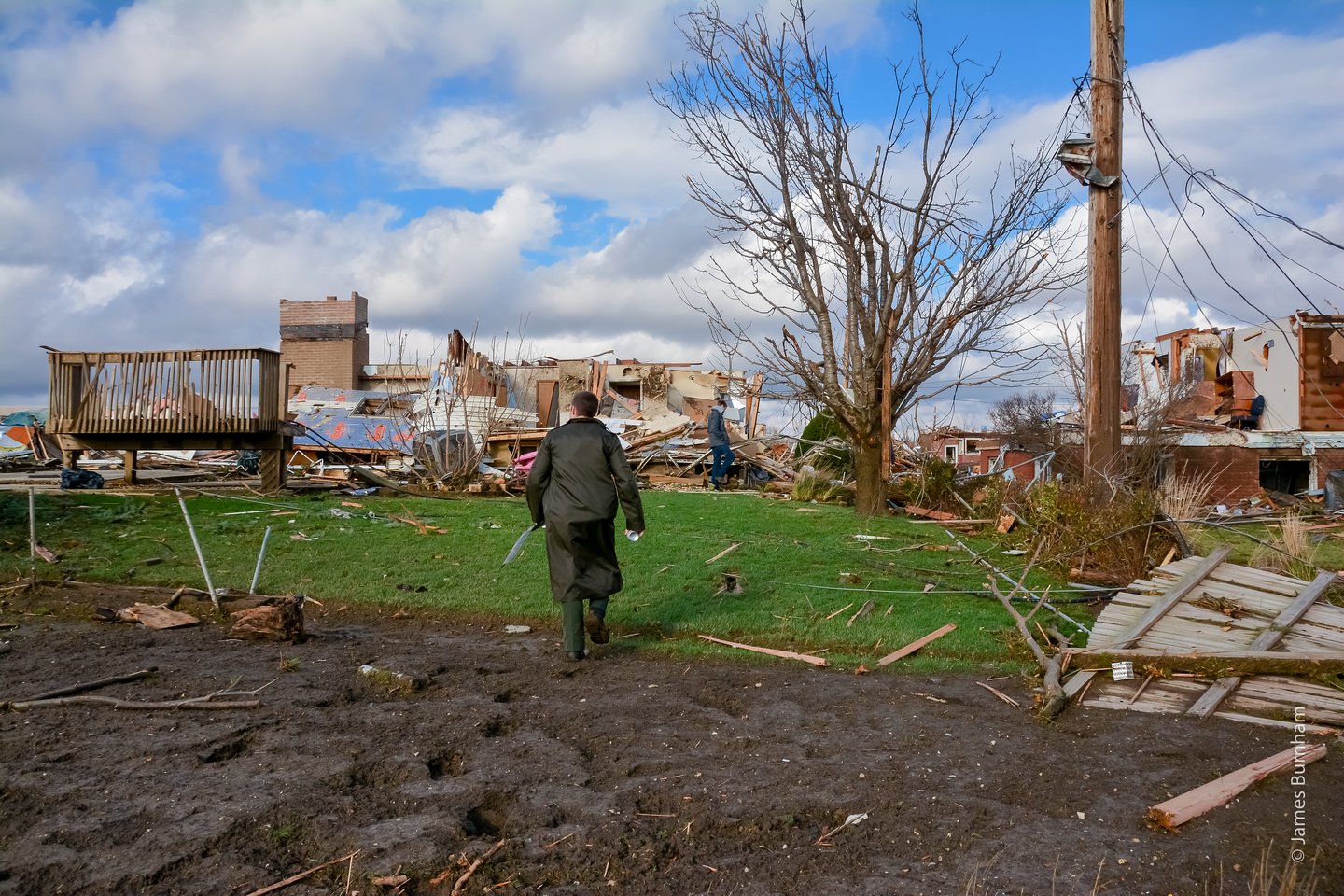 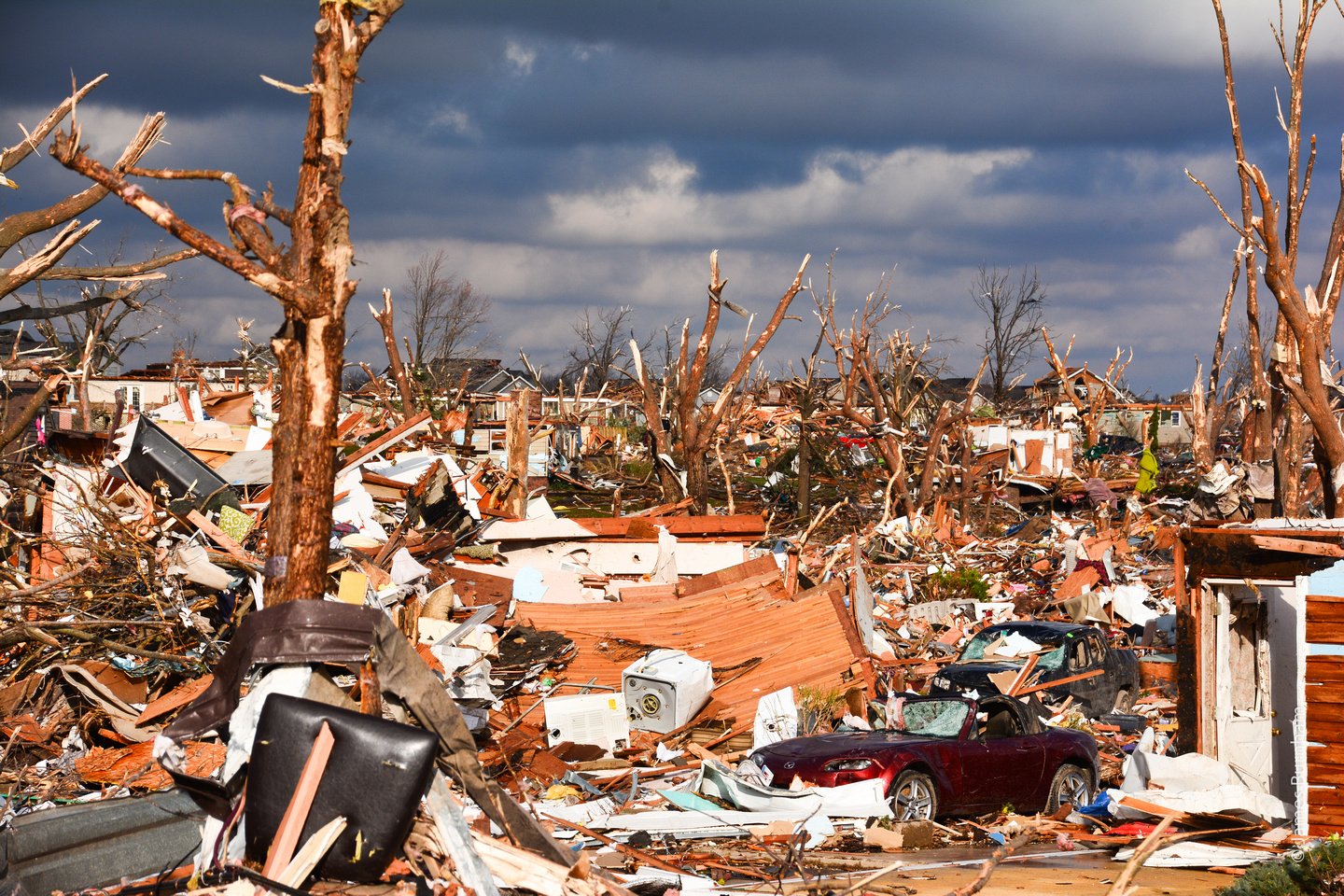 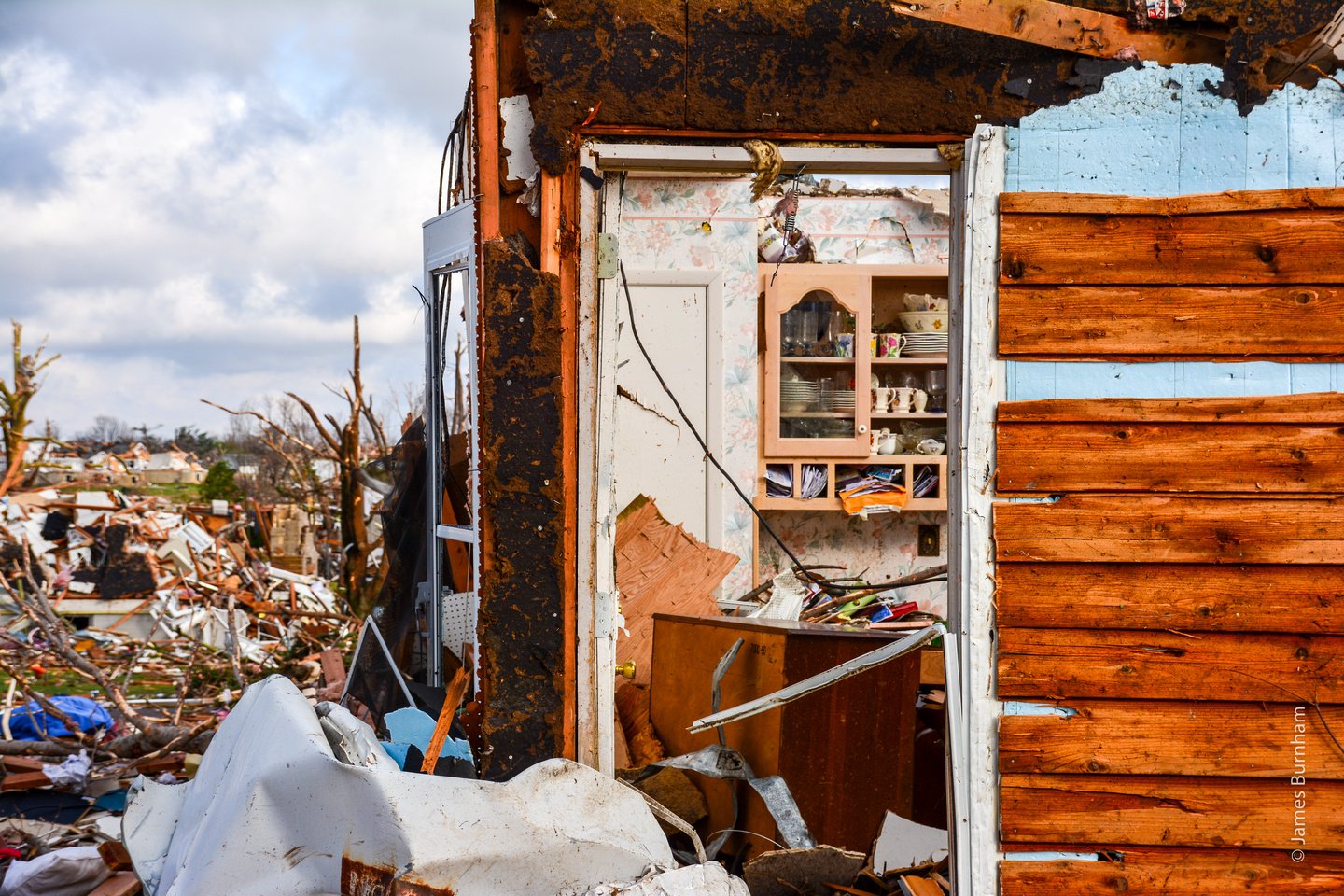 Houses were torn from their foundations, leaving only the subfloors on most, piles of debris in the basements of those that weren’t as sturdy. 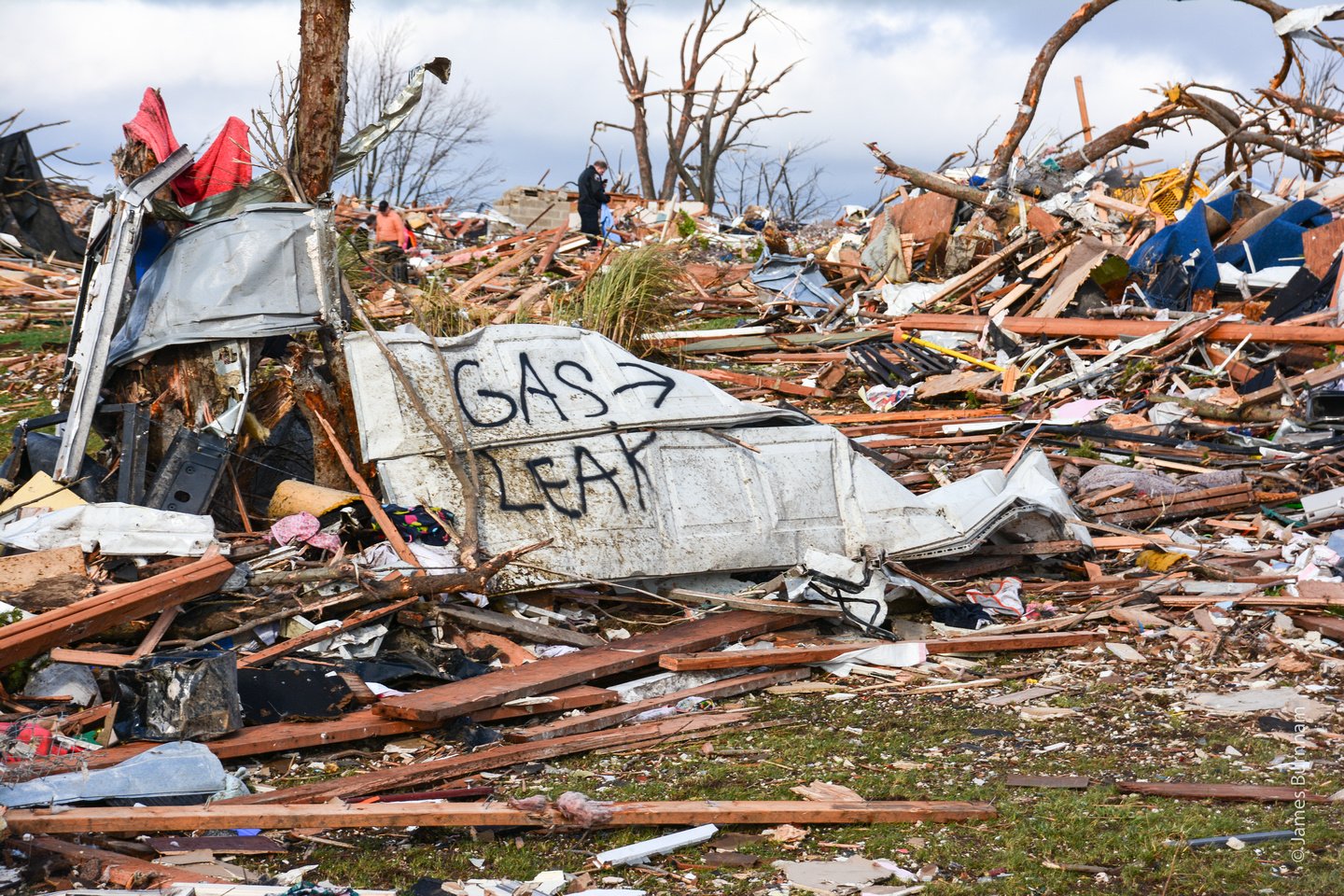 Fire Departments from four neighboring communities were going address to address looking for anyone trapped and marking houses that needed gas lines shut off. 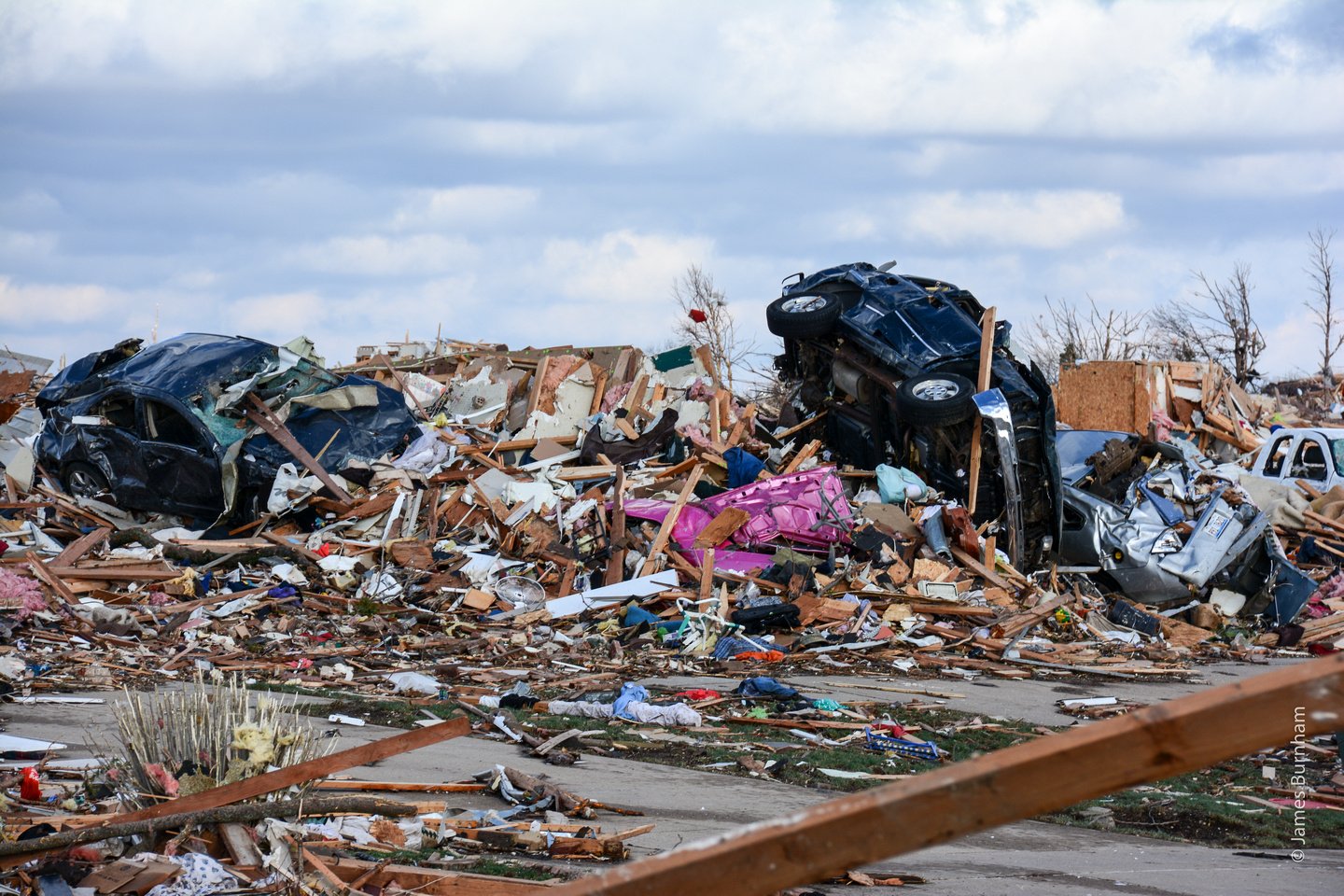 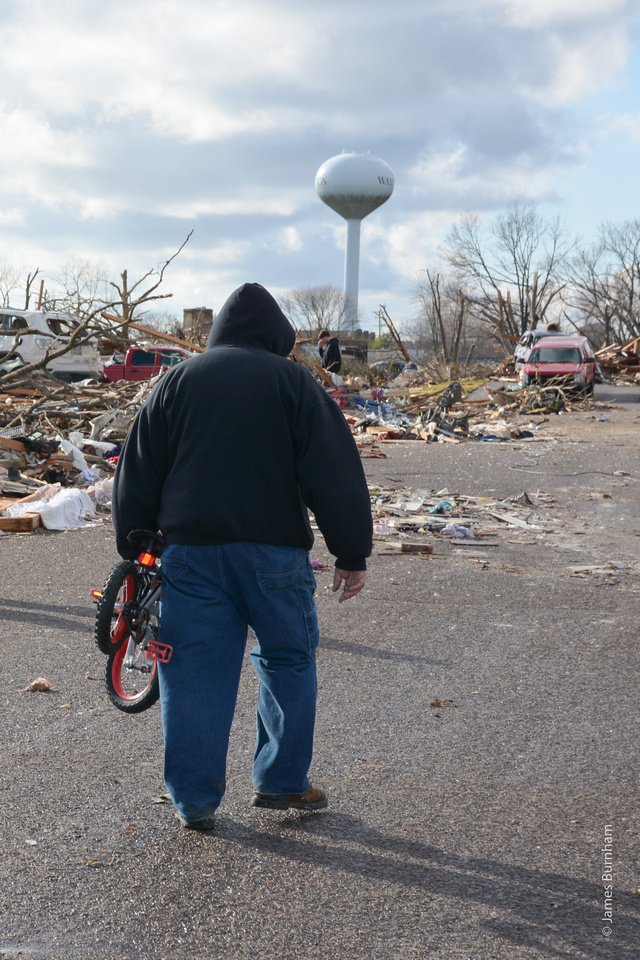 By the time I got there, everyone was in the streets looking for various things. One guy I encountered was looking for his dog. Another guy I met was holding an American flag looking for somewhere on his Mom’s property to hang it. Sadly, there was nothing left to hang anything on. 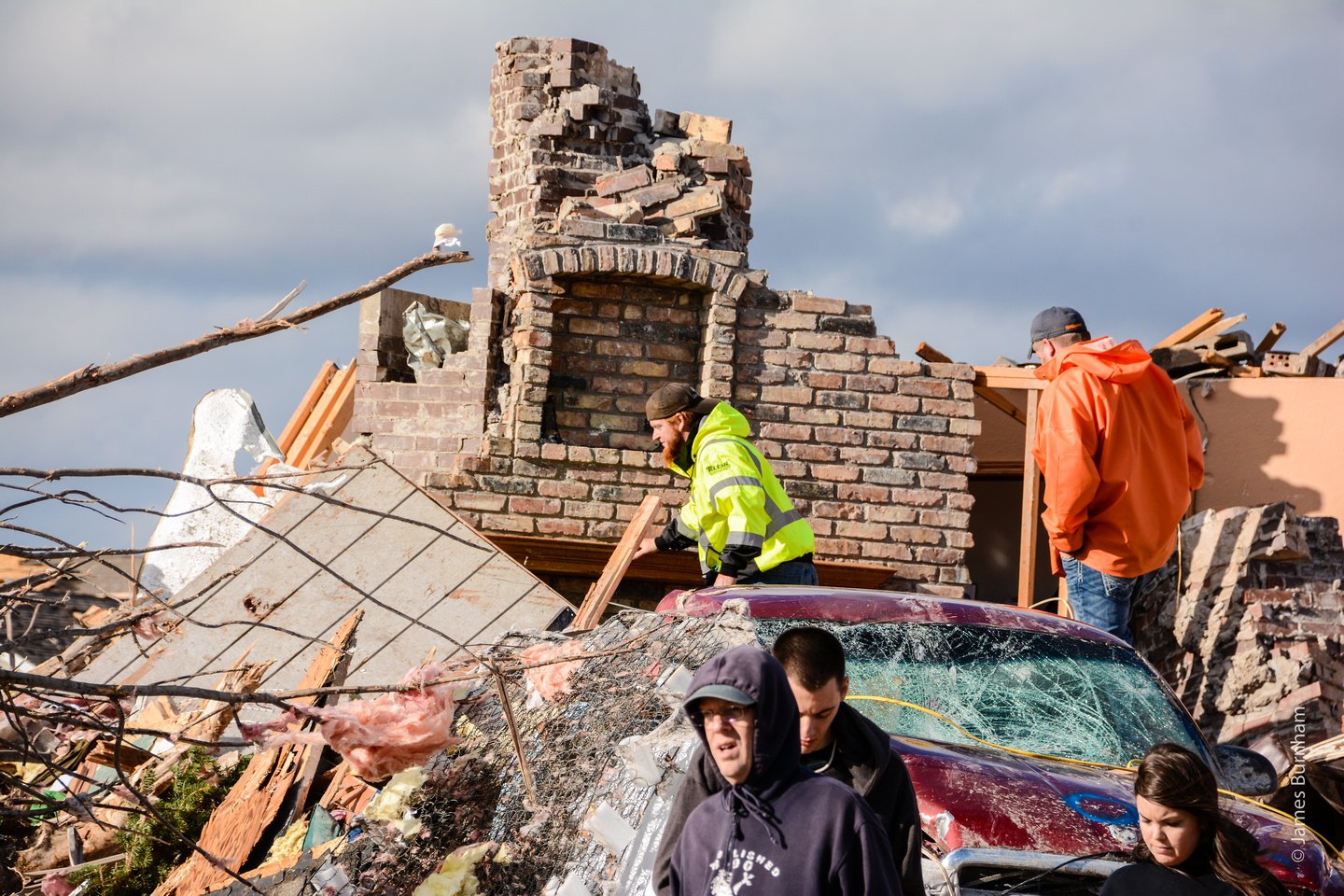 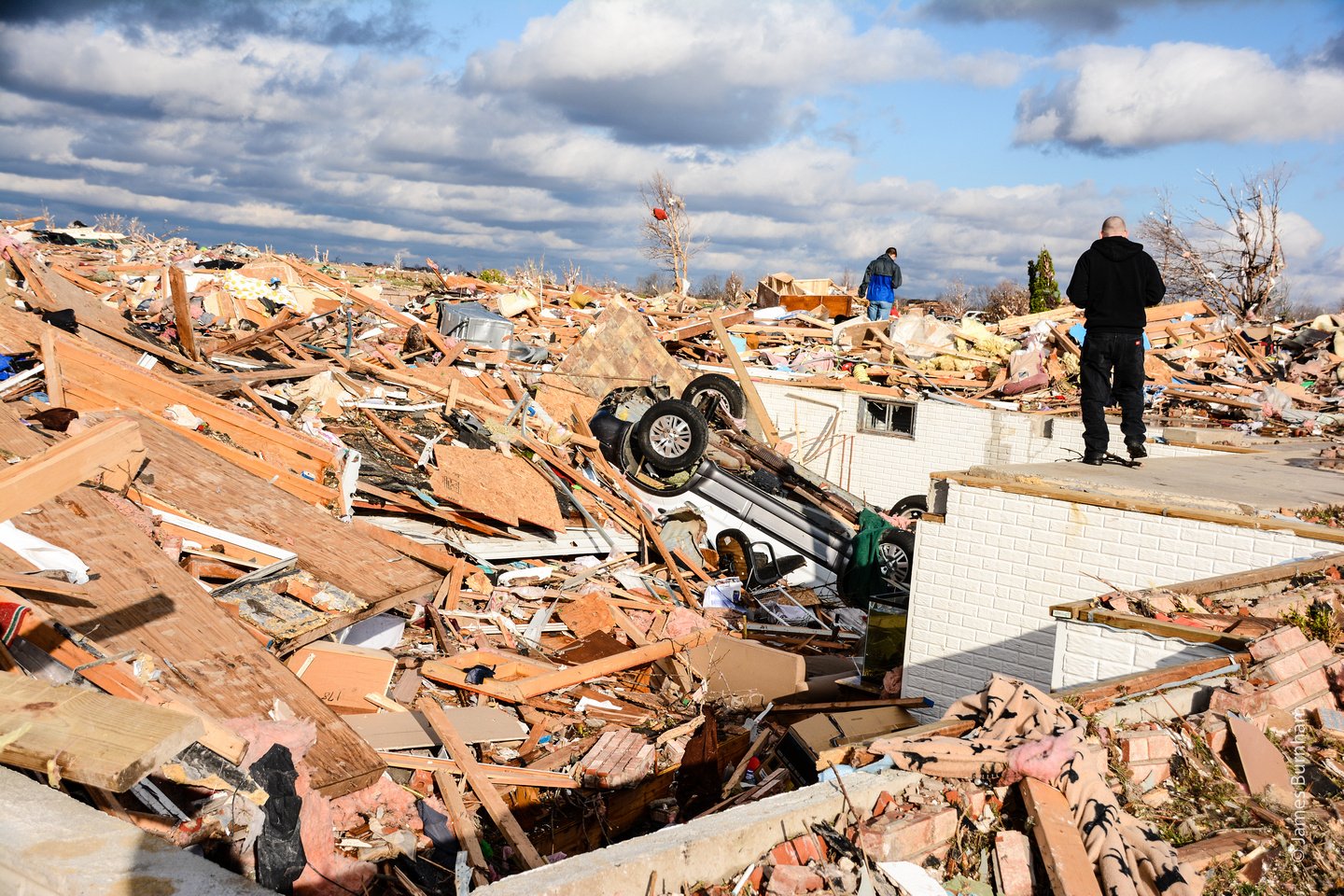 I caught up to the man who owned this property later in the year. He told me he was on the phone with his wife during the storm. She told him something large and black flew past the house and he told them to get in the basement. They narrowly escaped the collapse of the house, huddling along one of the walls. The upside-down car in the photo was originally in the garage. After the house was torn away, it had flipped and caved in the basement stairway where they normally would have taken shelter. And the large black object she saw fly past the house earlier? They assumed that was their neighbor’s car, which was found on the other side of the block. 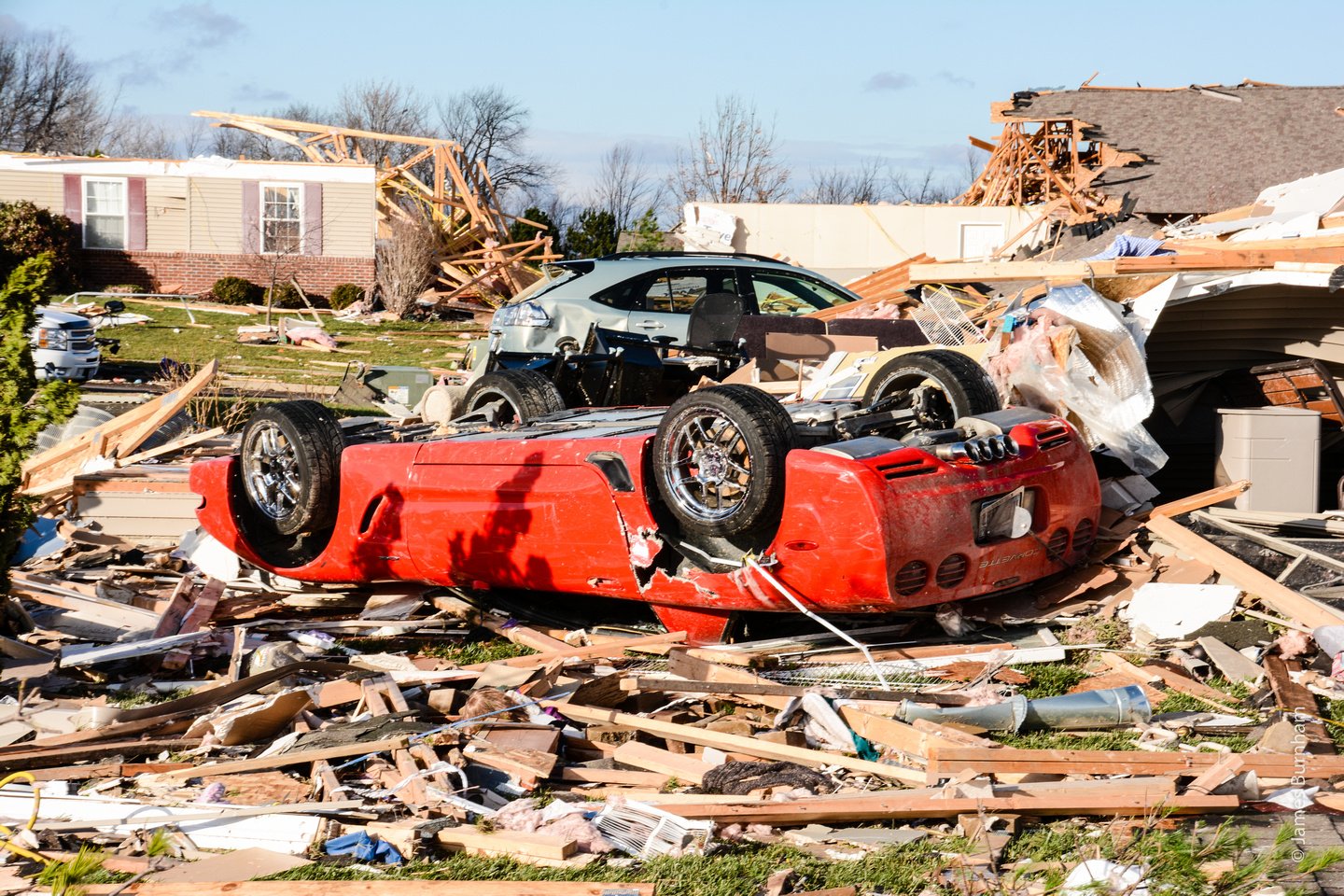 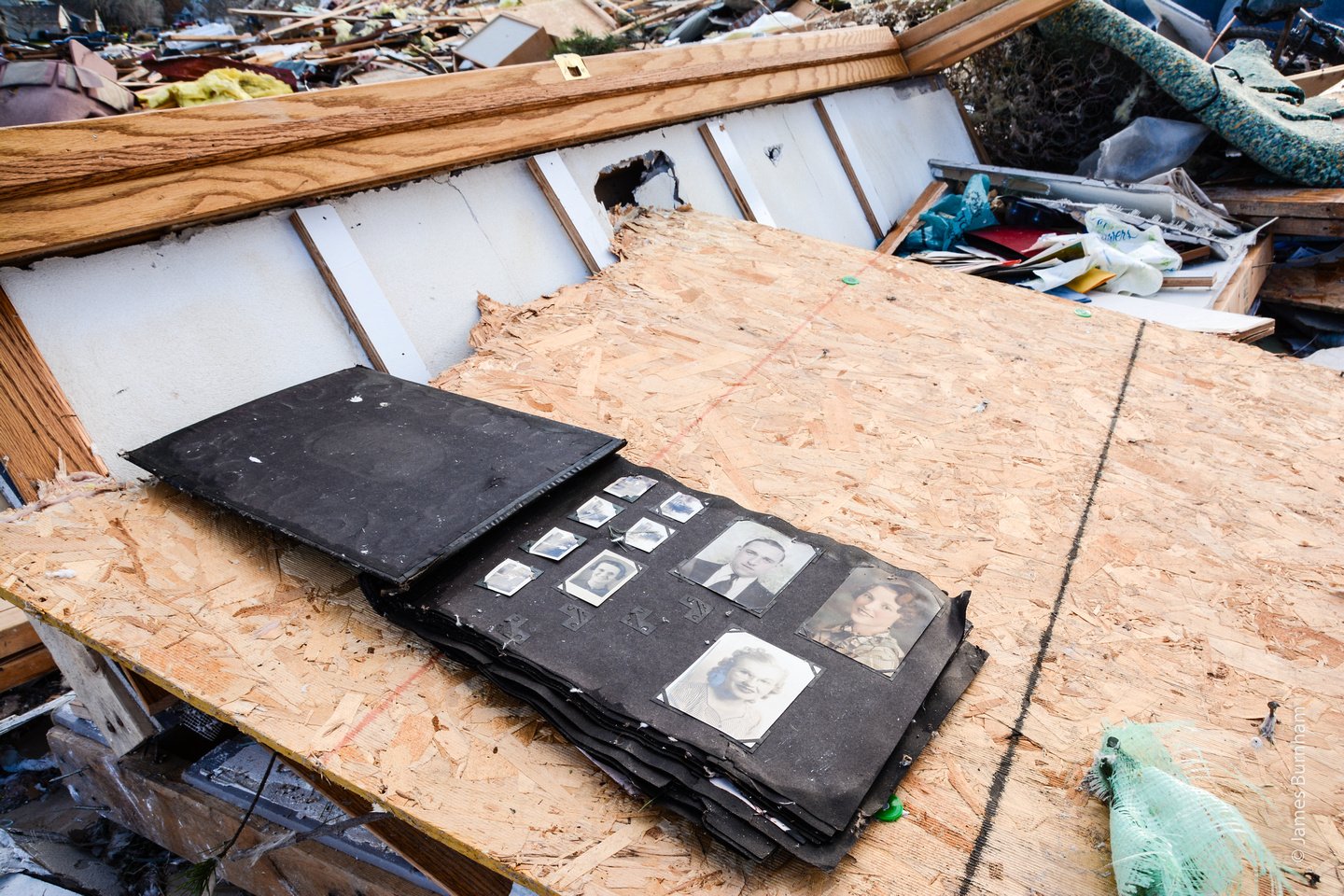 I hope the owners of this property found their photo album. I closed it and tried to shelter it the best I could. This would have been a hard thing to lose. The man in the previous story showed me the things he was able to save, one was an American Flag in ceremonial fold, given to his mother when his father, a veteran, passed away. I saw him visibly saddened that it was all he was able to save, but he was thankful that his family was ok. 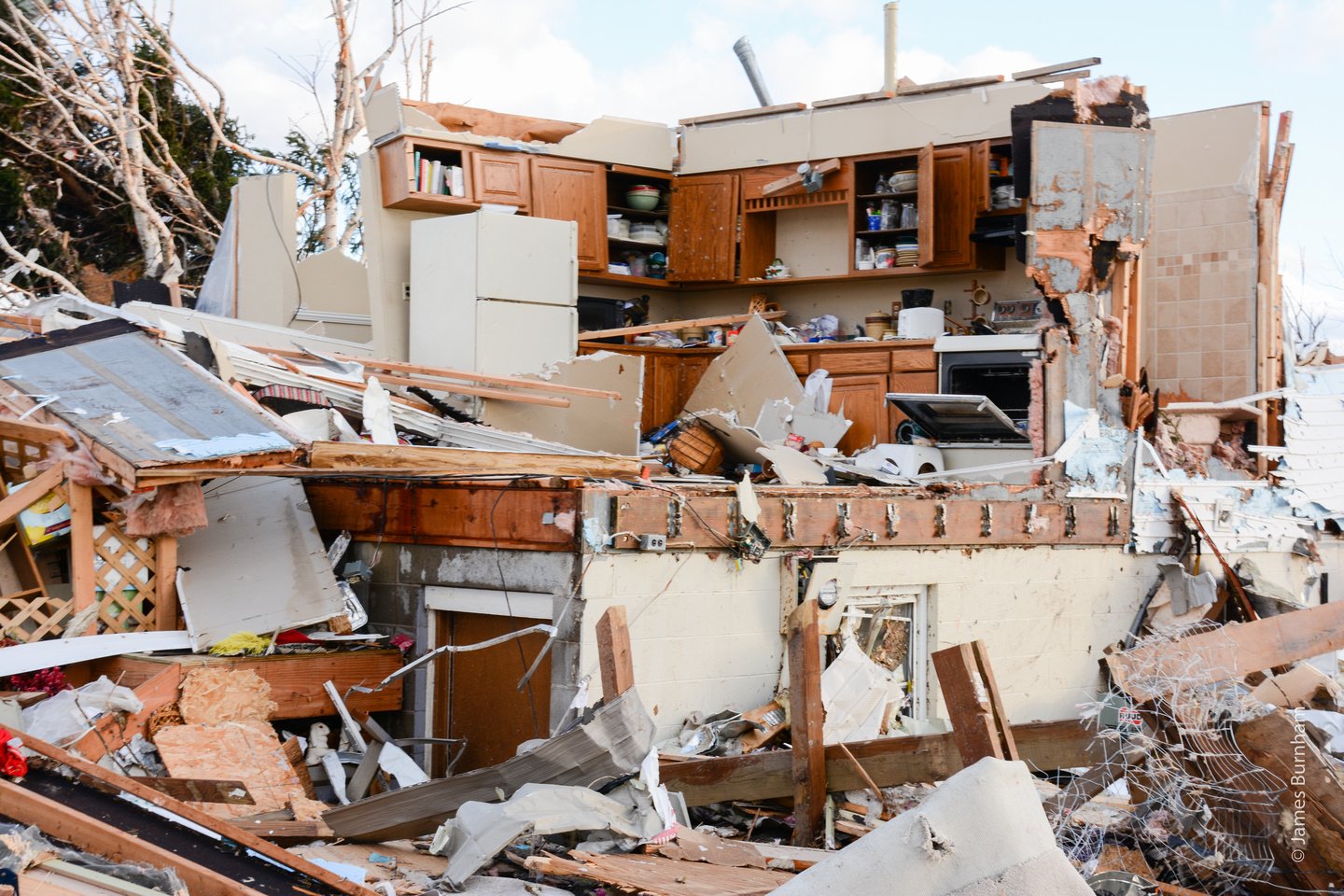 I saw a few kitchens still stocked with plates and glasses, all neatly stacked and unbroken, while sunlight beat down occasionally through the clearing skies. 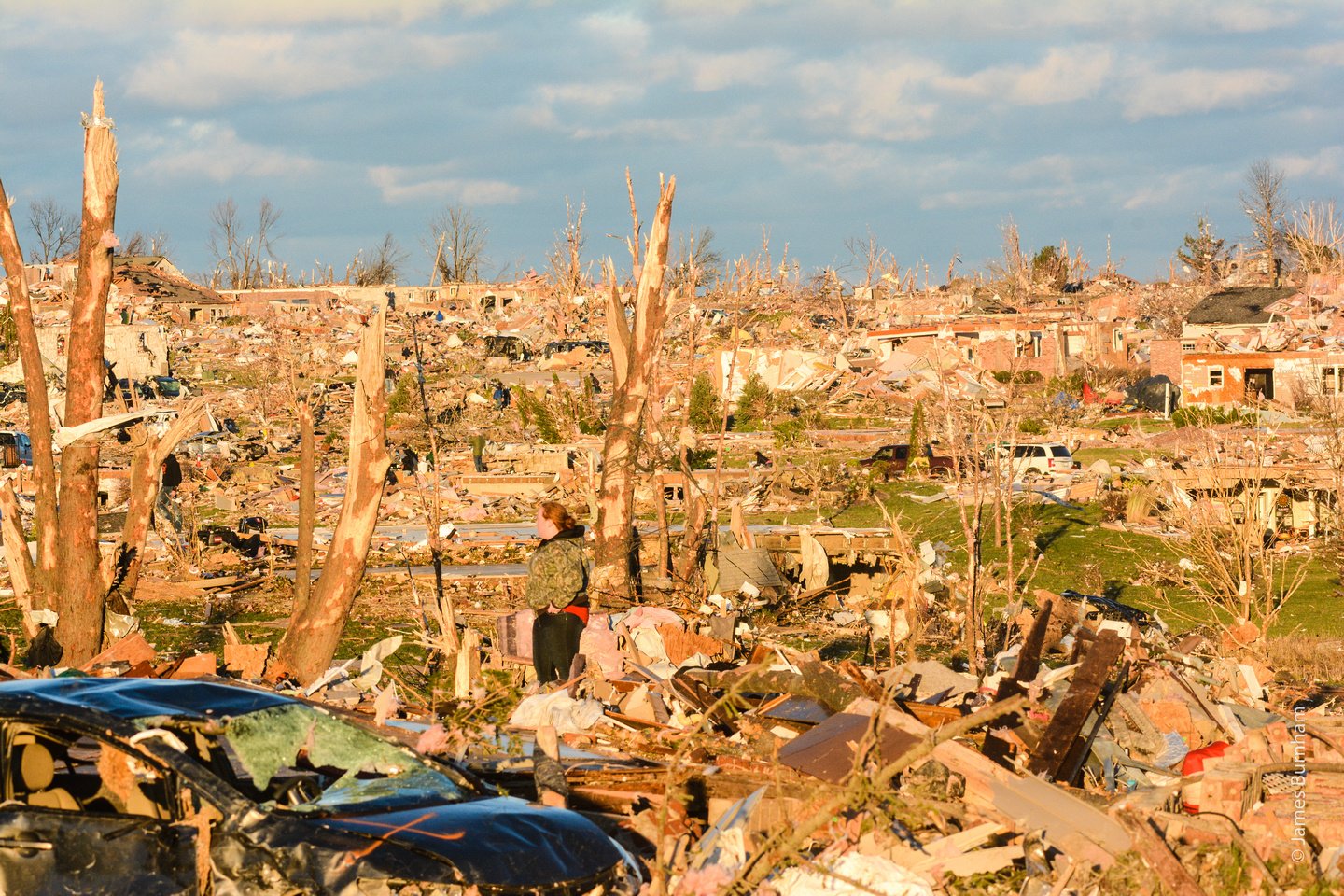 As the sun started moving closer to the horizon, I decided to stop moving up the middle. I had only hiked less than a mile at this point, having stepped on my fair share of exposed nails and with the light beginning to fade, I decided to head back to my car.  This is one of the last shots I took up the path of the tornado to the Northeast. There is one obvious person in this photo, though you might not notice her immediately in her camo jacket, but there are probably more hidden behind the rubble. They all were searching for something, or anything, they could save.

In the end, three people died, there was ample warning ahead of this storm as it hit during the middle of the day. Early warning systems saved the day. The following video is a fly-over I made using before and after satellite images from Google Earth, which saved a version of the area right after the tornado. You can see how destructive it is and follow the circular winds as they cut through the farmland to the North.