Listen to our interview at AM580 with Colleen Wares! --  Read the history behind the Leland Report Book
Read the latest stories from the road by Jim Burnham
Report # Photo:
Altered Reality
The 2013 Washington Tornado

“During the flames of controversy, opinions, mass disputes, conflict, and world news, sometimes the most precious, refreshing, peaceful words to hear amidst all the chaos are simply and humbly ‘I don’t know.'”
-Criss Jami (Killosophy) 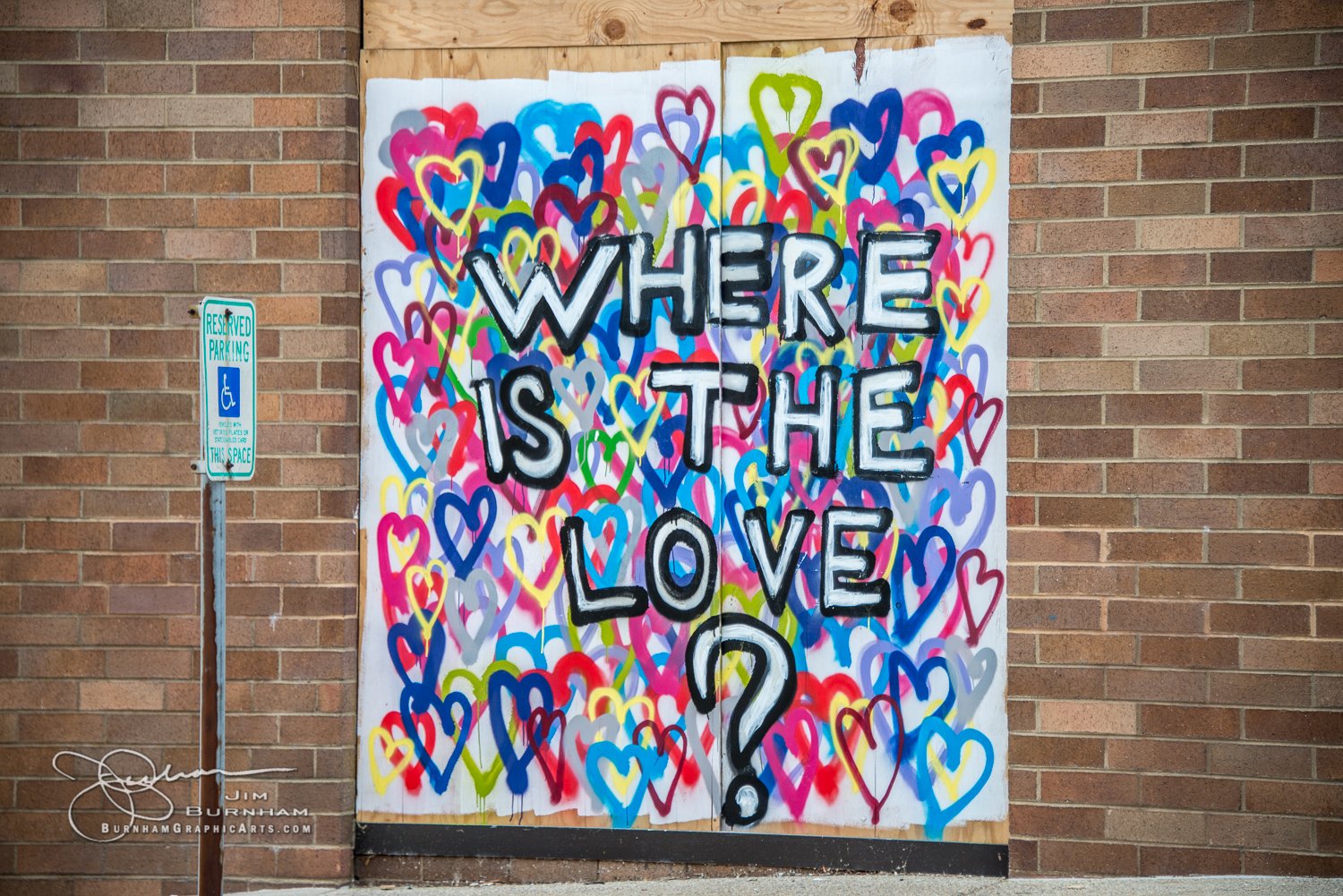 I never intended to go to Kenosha, WI. It was a convenient stopover on a trip back from Michigan to Illinois through Wisconsin. My friend had family there and by chance, they were within blocks of the rioting that followed the police shooting of Jacob Blake and the deaths of two protesters at the hands of Kyle Rittenhouse in August, 2020. Having an opportunity to see firsthand the aftermath was oddly and uncomfortably thrilling to me. Not a happy thrilling, but a morose embarrassed thrilling. The last time was walking up the path of the Washington, IL tornado shortly after it devastated an entire community in November 2013. But that was fresh, the dust was still settling, there was unity there. What I felt in Kenosha was a collective “WTF just happened?”. I was almost embarrassed to be there like I was a chaos tourist instead of a photojournalist. 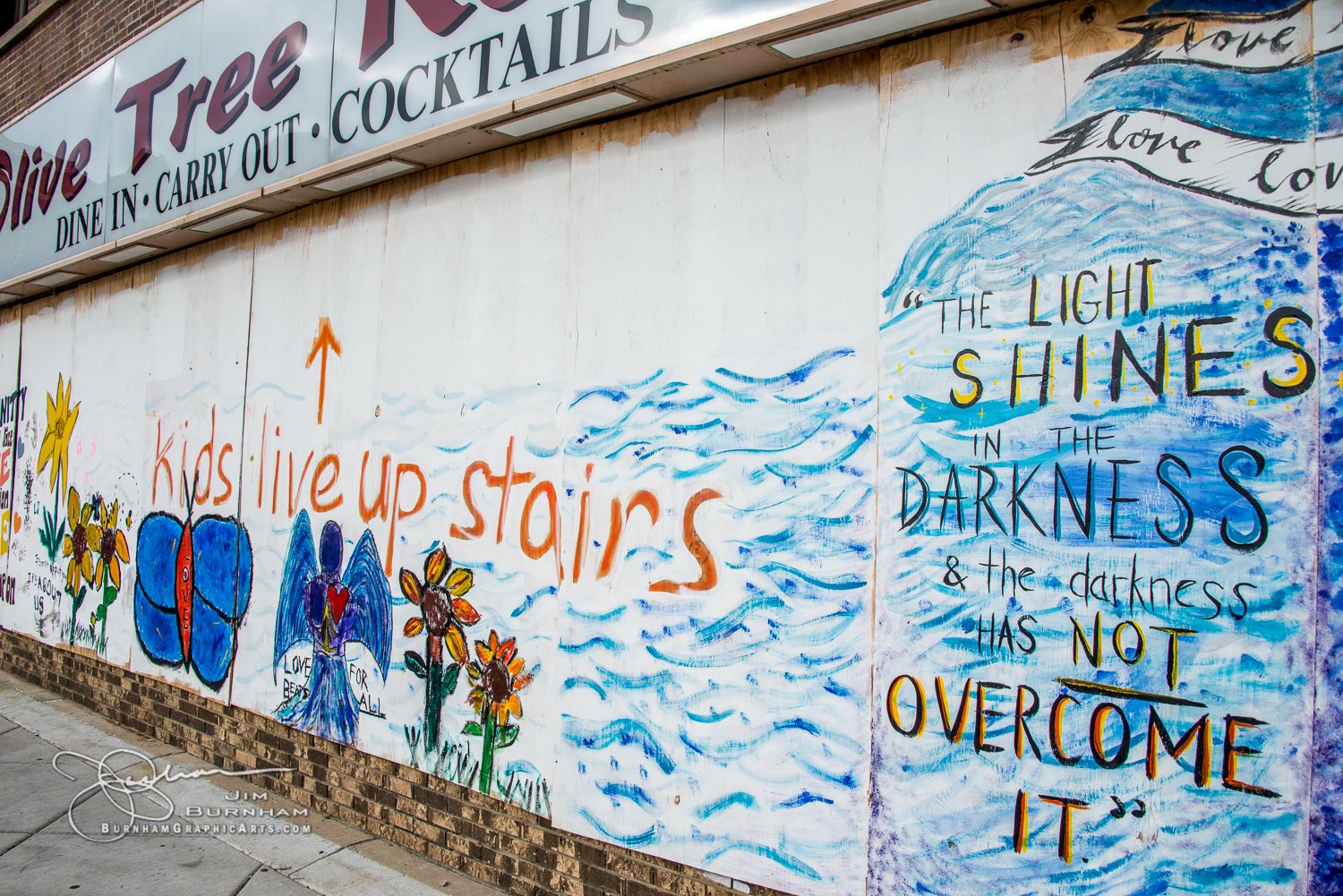 I arrived in Kenosha nearly two weeks after the unrest, boarded up storefronts dotted the main road. Street art tends to flourish in this after-riot environment, giving people the chance to give the bare chipboard, and a grieving city, some breath of life, and hope.

But seriously, having to remind those breaking into buildings that kids live there.

We took a short loop around the most affected streets before retiring for the night, in a largely middle-class lakefront suburb about four blocks from the nearest damage.

Kenosha, like many American cities, is a dichotomy of have lots, haves, have littles, and have-nots. The polished white of the Kenosha Marina fleet contrasts with the smattering of gentrification and gritty reality just one block off the lakefront. 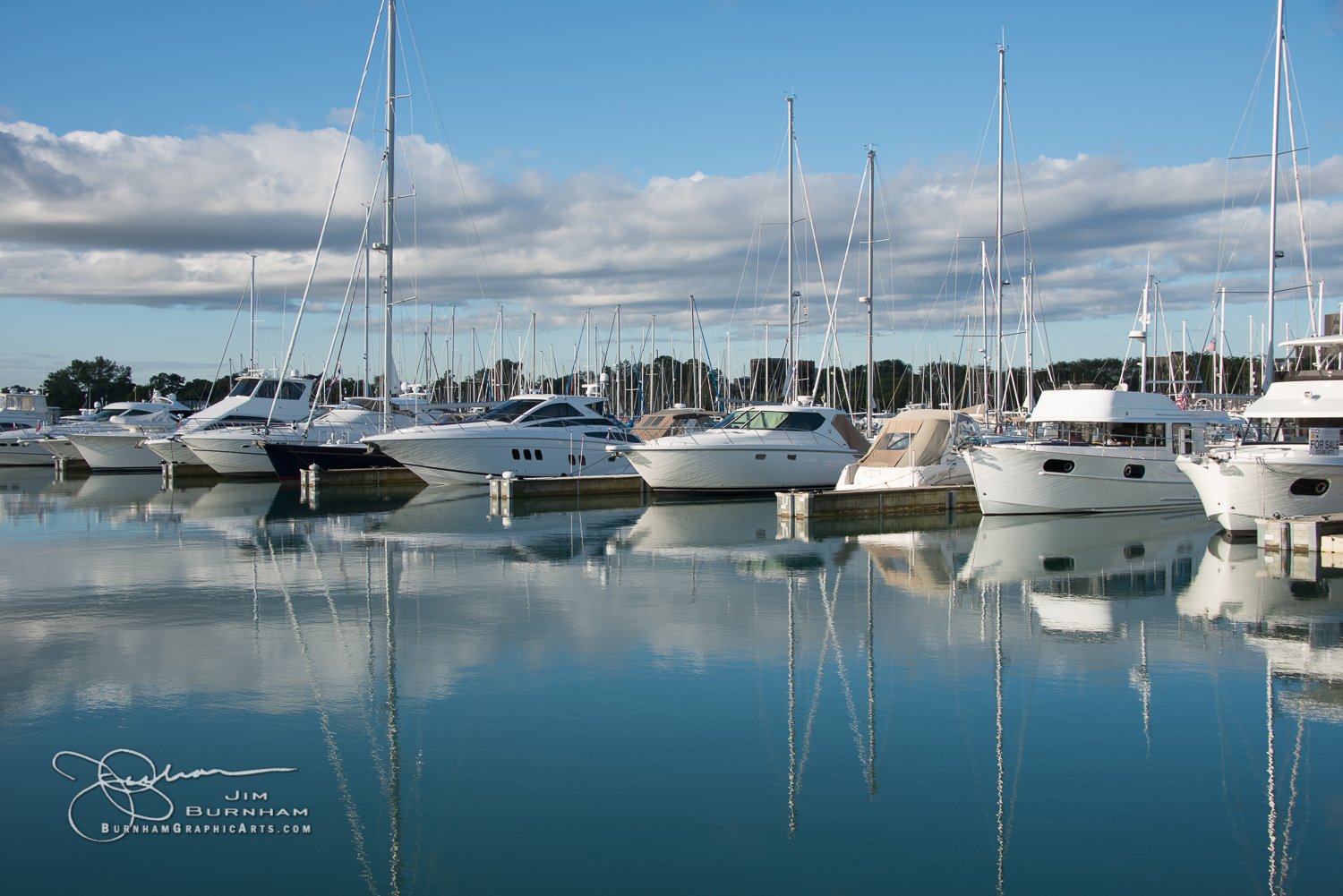 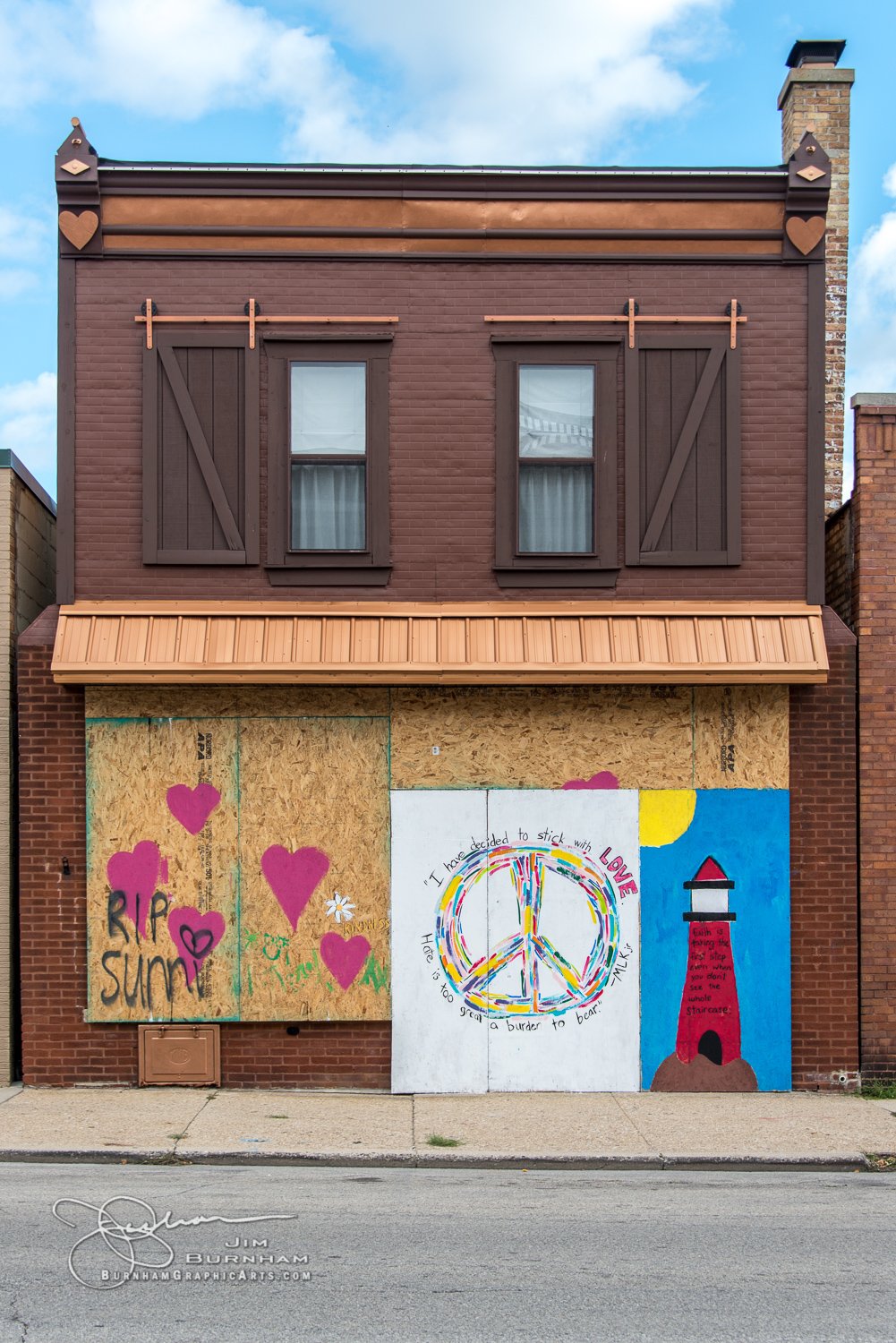 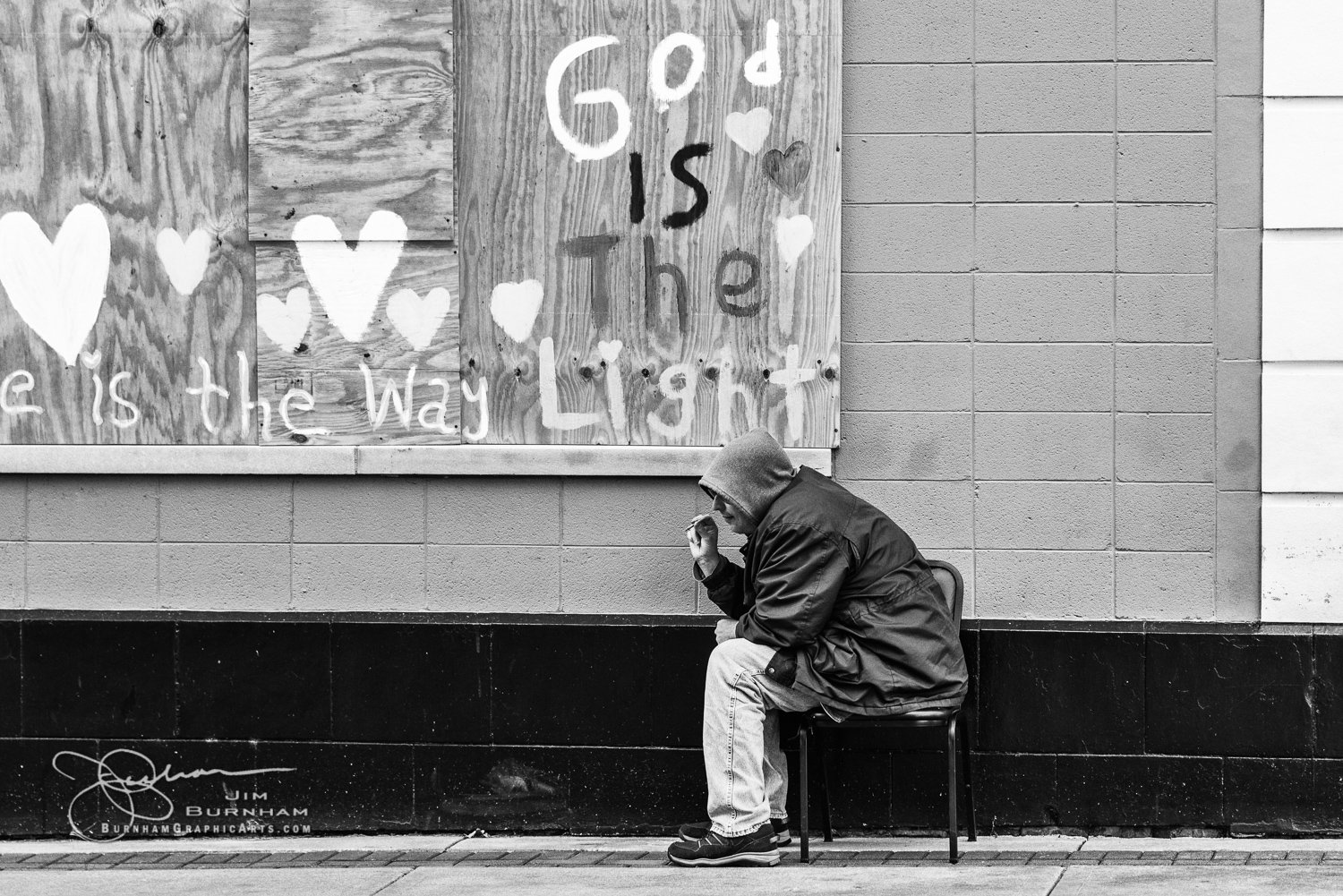 This article is not an effort to explain, justify, or rationalize the events that took place back in August. Ben Aaronovitch said it best, “When I’m considering this, I find it helpful to quote the wisdom of my father, who once told me, “Who knows why the f**k anything happens?” 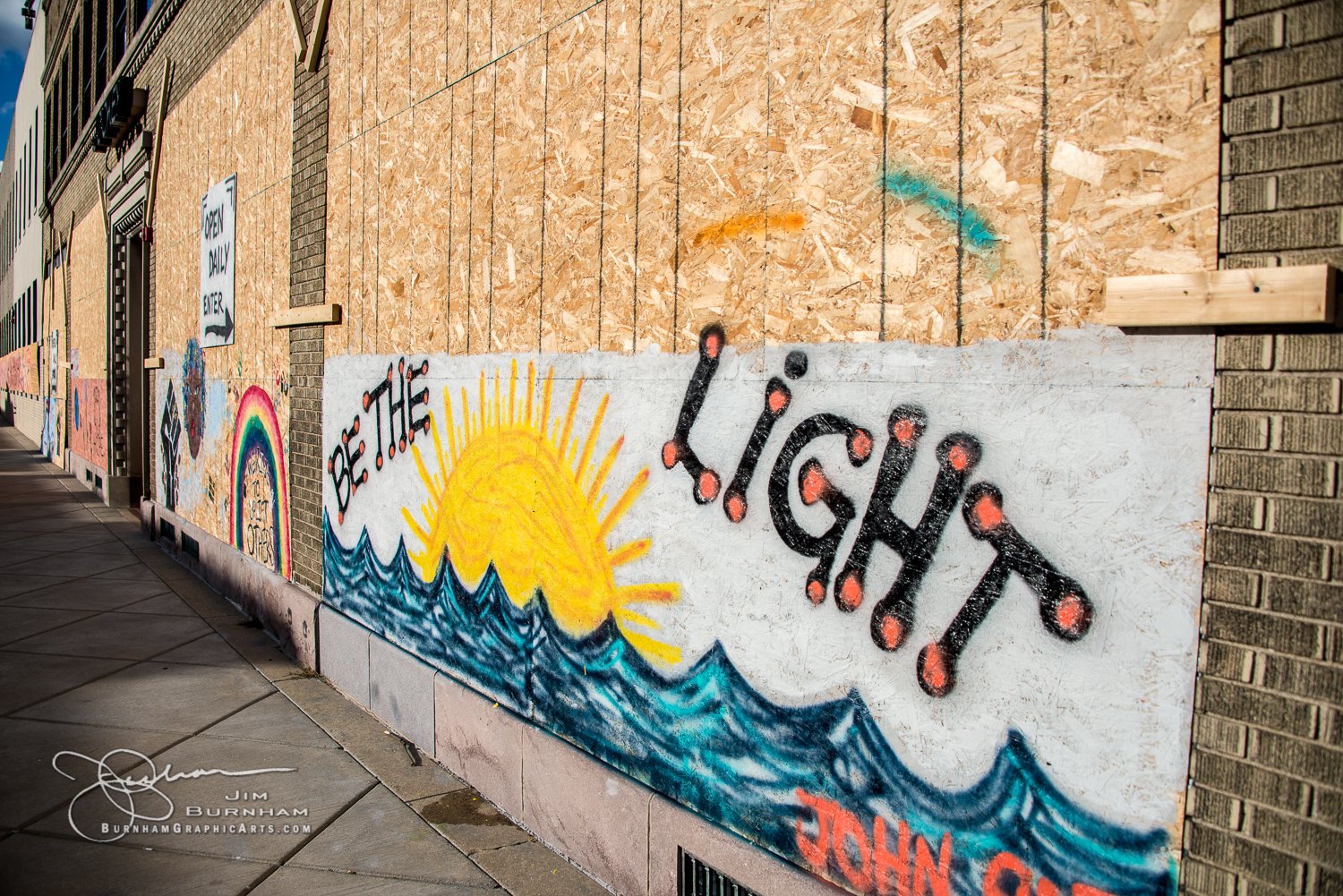 But the protest does continue, if now only on the temporary walls over the stores. There are people who care out there. It shows in the messages and art that appears on the buildings.

But the messages sometimes contradict themselves. 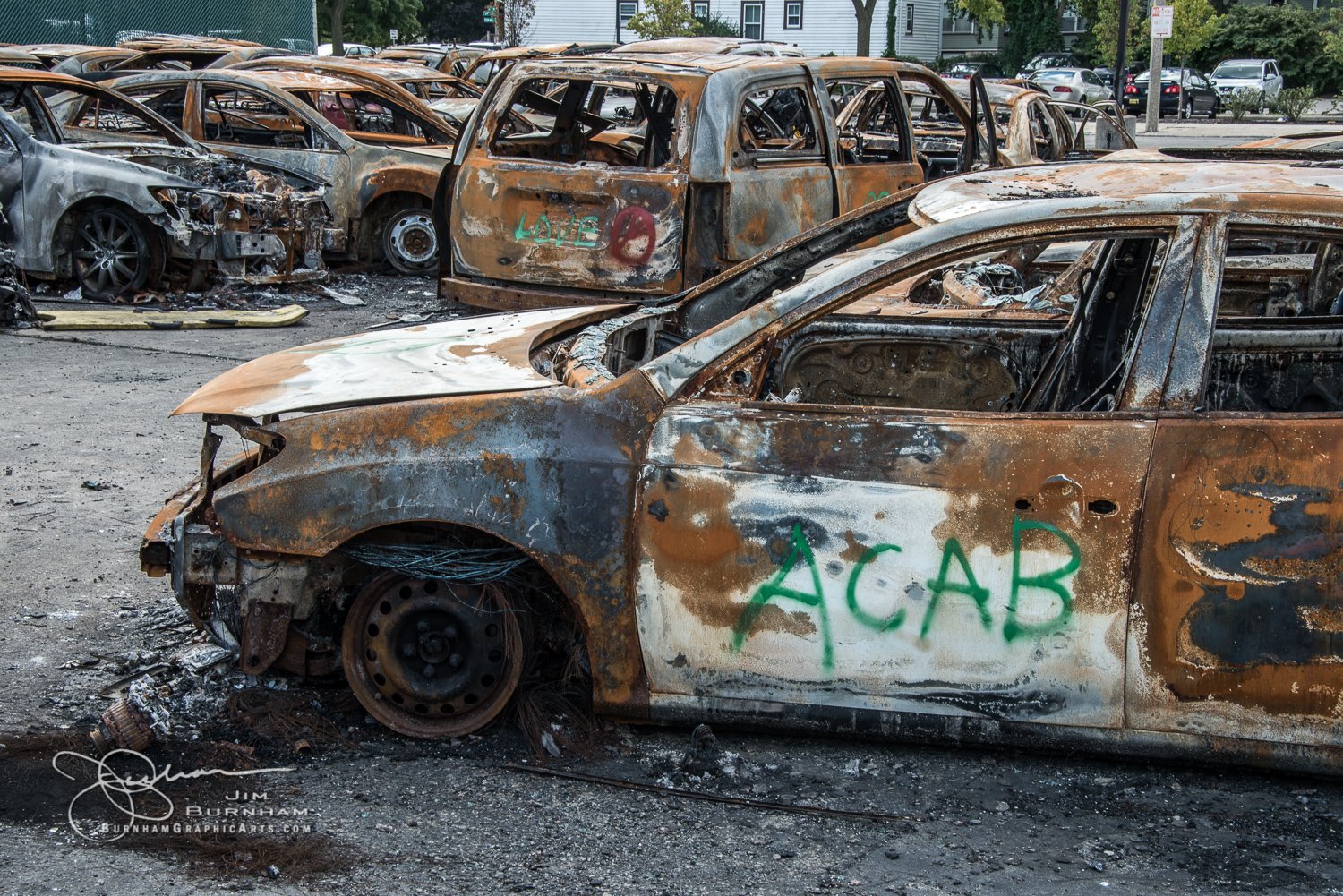 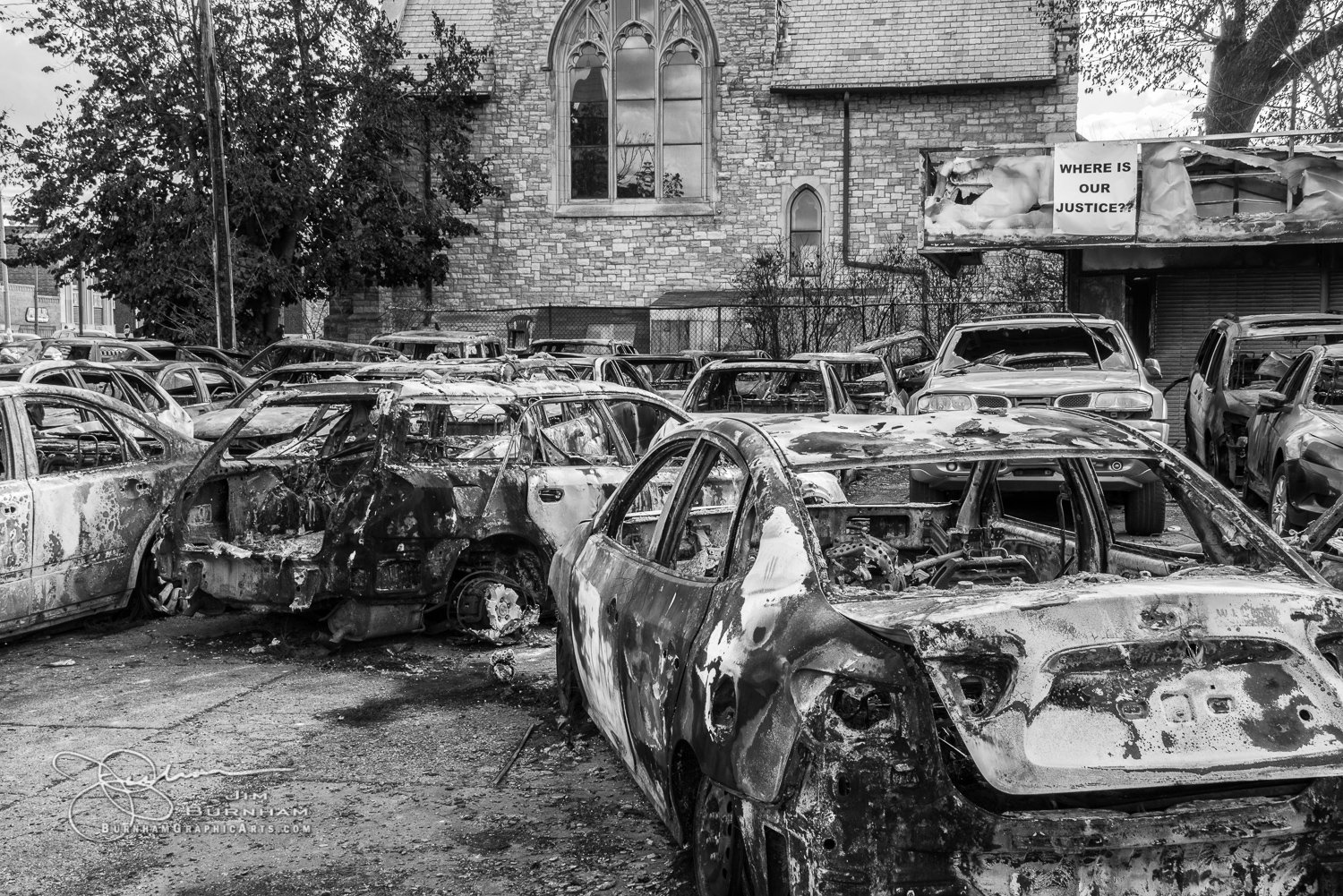 … a sign ironically echoing cries from both sides, “WHERE IS OUR JUSTICE?” Correction, whoever caused this destruction was not seeking justice, they were seeking chaos. The business has gone to social media to try to raise money to pay for the damage while they negotiate with their insurance provider. A link to active fundraisers for Kenosha is at the end of this article. 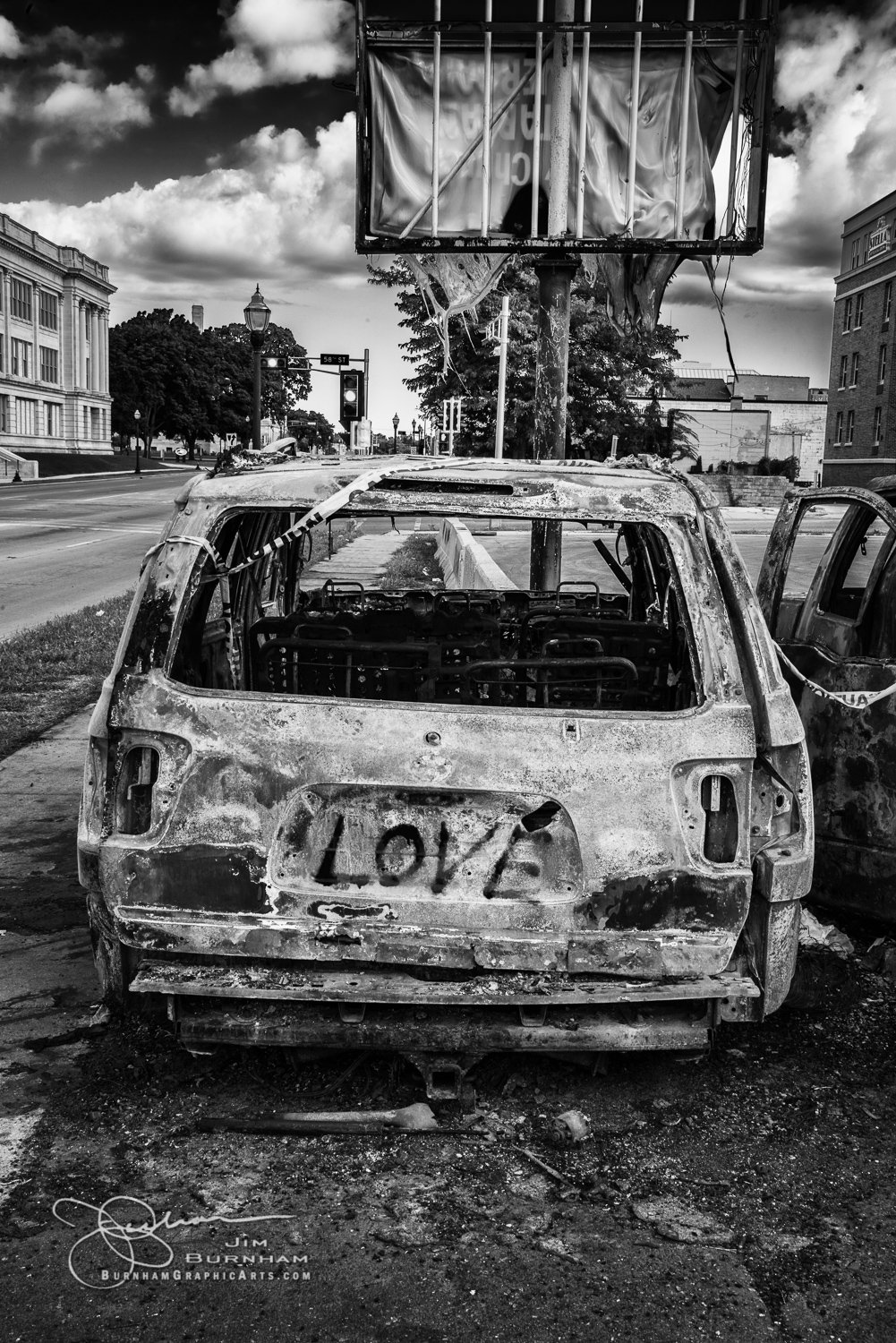 “LOVE” spray-painted on another fire-ravaged car under the molten plastic sign of the dealership. 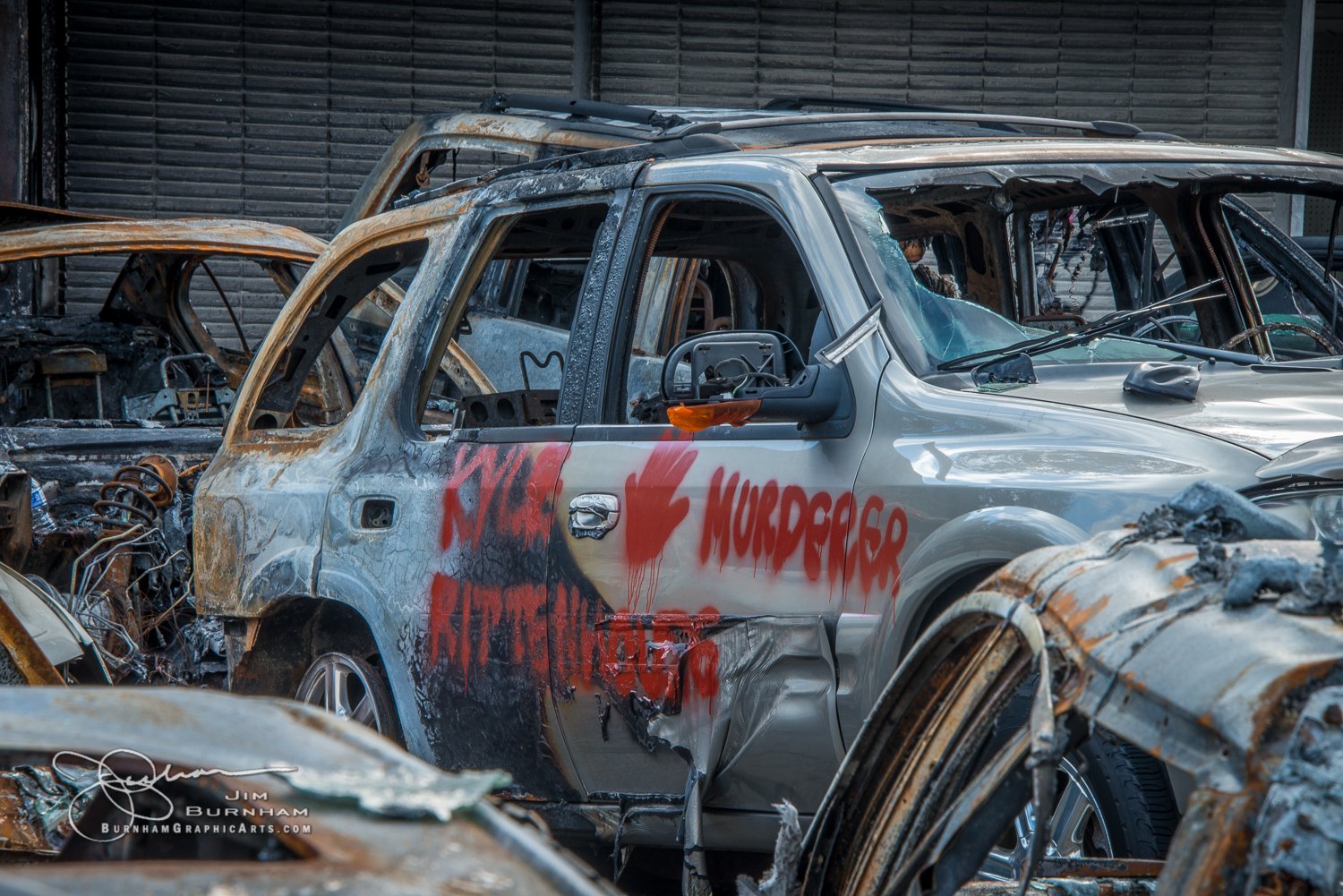 I focused more of my time on the dealership because it felt like a shipwreck in the midst of the boarded-up storefronts. Right off the sidewalk, not fenced off, basically untouched since it was extinguished three weeks ago. 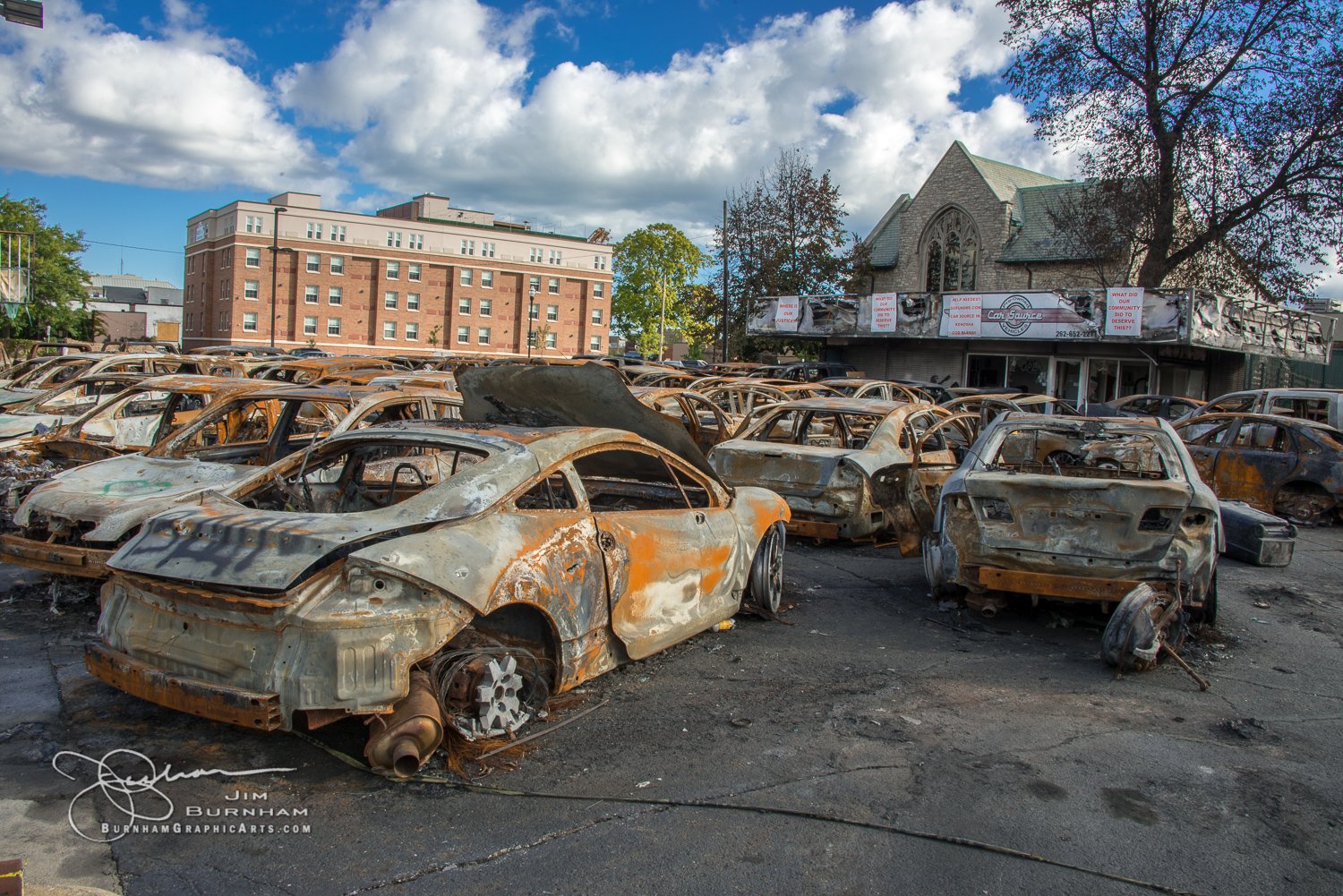 I could walk freely through the cars, but I stayed mostly around the perimeter as a Kenosha squad car sat quietly observing me. I felt like that chaos tourist, being both embarrassed and motivated having found art in the destruction. He moved on, eventually satisfied I wasn’t there to steal anything or make things worse. 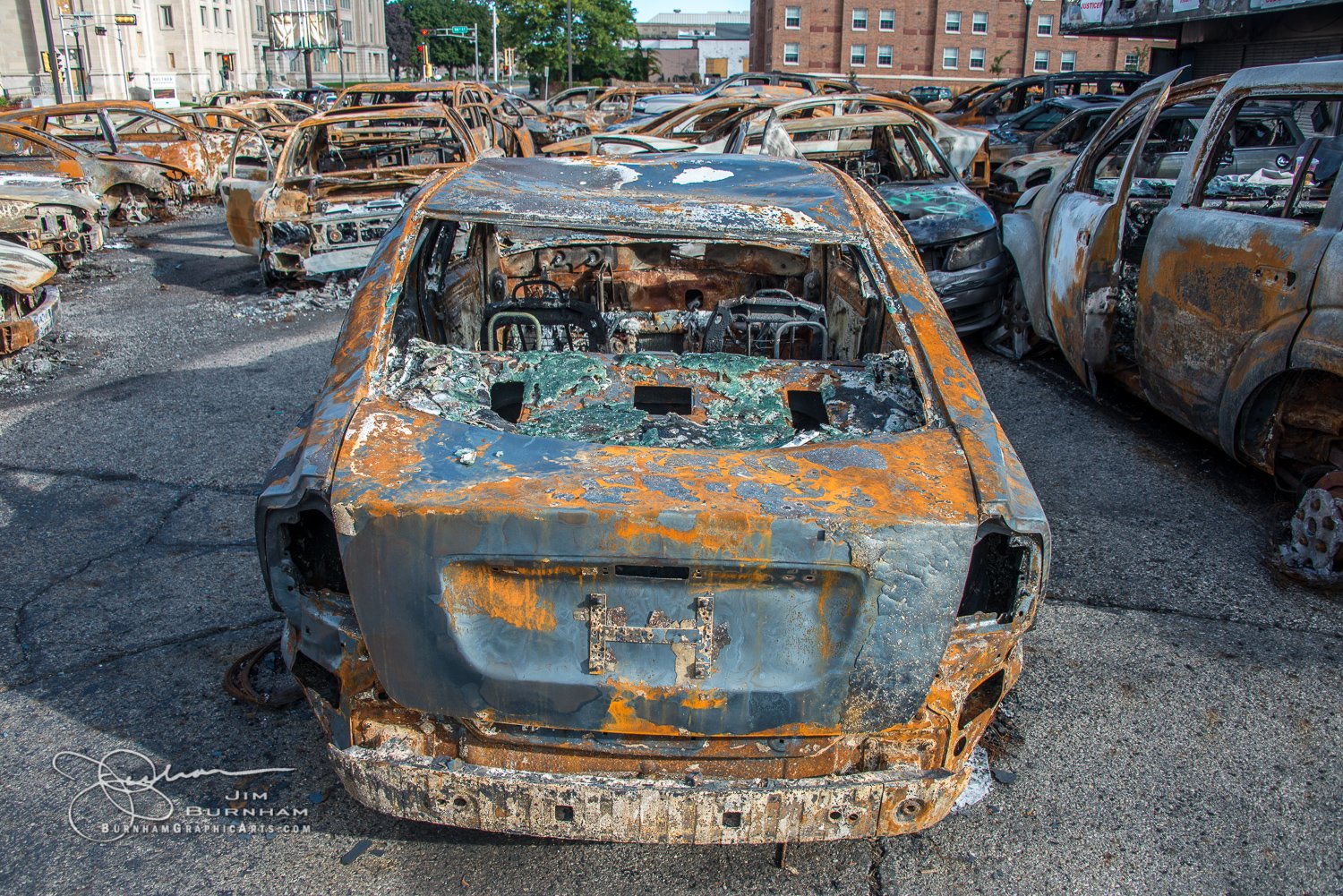 The molten glass shows just how hot this fire burned.

Here are active fundraisers tied to the riot in Kenosha. https://www.kenoshanews.com/news/update-fundraisers-underway-for-kenoshans-affected-by-riots/article_e5632b71-fa74-5a52-b792-7c7604a08c8b.html 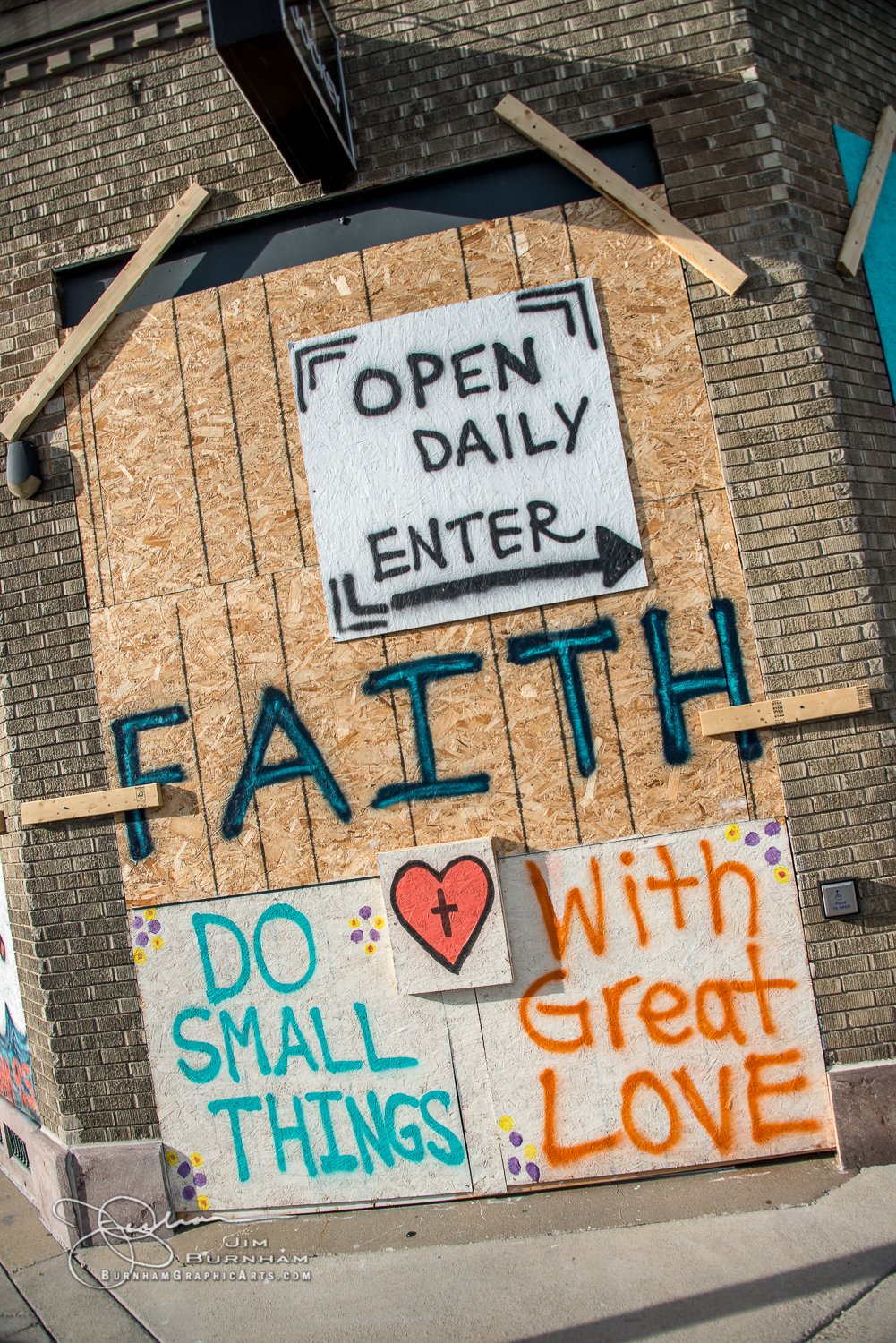