Listen to our interview at AM580 with Colleen Wares! --  Read the history behind the Leland Report Book
Read the latest stories from the road by Jim Burnham
Report # Photo:
Monarch Butterfly Release and Milkweed Seed Pod
Focus Trek 15 - The ALT Black Hills Photo Shootout Part 1

The Mega Time Lapse video is at the end of this article about how this project started. If you want to skip to that, click here.

In May of 2016 I met Linda Burnham Webb (no relation) at the 2nd ArtPop Awards reception at the Waterhouse in Peoria. I was one of the winners of the 2015 contest and she ended up being the people’s choice winner for 2016 with a macro photo of her beautiful clay monarch pendant.

She clued me in on a commission she was doing for Mitch and Charli Gregory up at a huge wildflower garden in Washington, IL. She was going to paint a large 8’x8′ Barn quilt with a monarch butterfly on it for the side of their building and thought I might want to come up and take some pictures of the process. 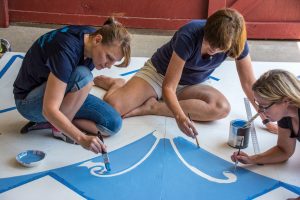 I captured that whole event in a time lapse when it was installed which you can see here. In addition to that, what I found sent me on an interesting journey into the “Mega Time Lapse”. 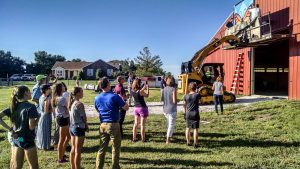 As Mitch took me for a tour of the garden, he talked about his dedication to pollinators (birds, bees, butterflies, etc) and how he set out to create a haven for all of them in the middle of what is mostly corn and soybean farms. With the help of a few of his friends, he converted what originally was a family horse farm into one of the biggest privately owned wild greenhouses I have ever seen. Planted (and weeded) by hand and then year after year sustained by its own seeds, it has Goldenrod, Yellow and Purple Coneflower, Indian Grass, Black Eyed Susans, and Milkweed among many other wildflowers natural to Illinois prairies. 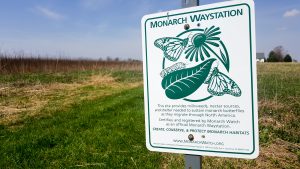 The milkweed is for the monarchs especially, who lay their eggs on the stems and leaves and after hatching, devour the plant before forming a chrysalis and becoming Monarchs. 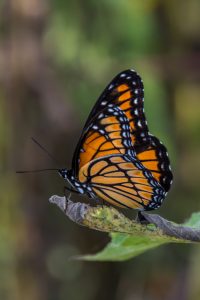 It has also become a nesting haven for red winged blackbirds, who dive, dart and chirp around those that get too close to their ground based nests. 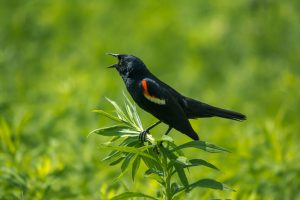 At that time, I had already finished my first long-term timelapse project with the “Clouds” music video, but that was 26 separate 10 to 20 second sequences of 300-600 frames, each shot in 20-40 minutes at 5 seconds apart. I had a plan on that day to create a time lapse that would span the entire growing season of the garden, from dry, empty ground to buds to full green and blooming back to dead. But I needed to be able to shoot from morning to sunset consistently, day after day, for at least six months. Driving up there every day to set up would be impossible, much less keeping a camera powered all day in all sorts of weather. A Go-Pro system seemed to be the only logical solution, one that could be powered by a remote battery that could be continually charged via solar power. I had the choice to run power to Mitch’s house, but I decided that this was a challenge that needed to be met. It’s possible that I would want to set this up in a really remote area that had no power. To the internet!

On Instructables.com, I found exactly what I needed. (Here is the link to the page if anyone is interested.) I converted a waterproof trail cam case to allow a Go-Pro to be mounted inside. I cut a square in the case lid to accept a 55mm GoPro filter adapter. After mounting the GoPro inside, it fit flush with the filter. The case closed and kept the rain out. A hole was drilled in the bottom to allow the cables that ran to a standard garden variety tractor battery and that to a regulator and a 10W Solar panel array. After trial and error with two 5W panels, I doubled it with an added 10W system and found it kept up with the power needs as the GoPro runs continuously (always on). 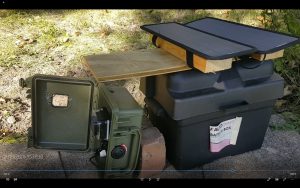 My test time lapses resulted in videos like “Clouds and Stars” and  “Differential Advection”. I finally ended up with a stable system that I could leave at least a month without it stopping or running out of power. I set it up facing Southward so as to minimize the appearance of the sun as it inched its way northward for Summer. Mitch helped me pound a angle-iron deep into the ground on which I mounted the case. Hindsight now tells me I should have mounted it higher and you will see in July that the vantage point changes a bit and the coneflowers appear to shrink suddenly. That’s just me moving the system up to compensate for the height of the plants at that time. 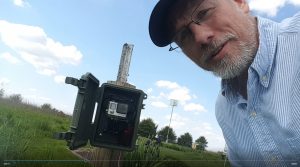 But this was not the only mega-time lapse I had going at the time. A month after I installed the first system, I was told that Leland, Michigan was getting a delivery of a dredging barge in order to clear out the entrance to the harbor. I also wanted to time lapse that effort because it was probably not going to be as extreme a situation ever in the future. I purchased a new GoPro system, but this was a special unit created by CamDo based out of Vancouver, CA. It is a waterproof case, battery, solar panel and special control unit that allows more precise time control over the camera. It also turns the camera off between shots to conserve battery life. I got permission to mount that on the navigation pole in April and mailed the system to a friend who made the trek out on the breakwall to put it up. The resulting dredging timelapse is here. 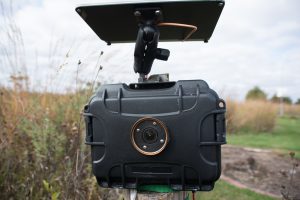 When I brought that system back from Leland, I replaced my DIY system with it and programmed it to take a photo every five minutes during daylight hours instead of the one minute interval that I was locked into 24 hours a day before. Since I was going to drop 95% of the images anyway, that would allow me to take less photos and not have to worry about the card filling up. I almost regret moving away from the one minute interval. As you will see, the weather patterns were incredible. I wish I could show them all, but there were so many that they will instead appear in a different video all to themselves.

The process was not without it’s pitfalls. The wind was strong enough that the case would rotate slightly causing a jitter in the video. We compensated by stabilizing the stake with guide wires. The case was prone to heat build-up on the inside (being weatherproof, it had no air flow) and the UV filter would fog up in the morning if I did allow air flow. Occasionally, the GoPro would just lock up. One day I found a rabbit had built a nest in the battery box and chewed through the wires. There was also some weed whipper damage to the wires going to the solar panel on the outside. One time, the GoPro just died completely and I lost two weeks of footage. You will see a noticeable jump in growth in June when that happened. I had to get a new GoPro to replace it since the second GoPro was in Leland at the time. Once in July, I started the GoPro and waited for it to take a photo and then left. When I came back a week later, I found that was the only photo it took the whole time. 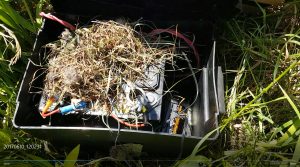 I want to give a heartfelt thanks to Linda Burnham Webb for cluing me into this place and to Mitch and Charli Gregory for allowing me onto their property, sometimes at very short notice, to check the system and replace memory cards. It is their dedication to this wild ideal that allowed me to do this video. Thanks to my wife Erin, who continually put up with me as I was “off to the wildflower garden” every one or two weeks. But sometimes I had to go because what they have is very special and spectacular, especially around the end of July when the large swaths of Yellow Coneflowers burst open, in August when the Goldenrod blooms, September when the Monarchs layover enroute to South America, and if you look close you’ll see some of the Orionid meteor shower in the October “night time lapse”. Hopefully this video will allow everyone a unique window into this fascinating world and a better appreciation for pollinators and the delicate dance they do with the wildflowers and the weather.

Turn your sound up, go full screen, sit back and enjoy…