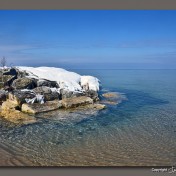 Woke up to the forecasted 1 to 2 inches of overnight snow as well as an overcast sky.  The early morning still had a few flakes in the air.  At noon the sky began to blue along with the rising temperatures.  The ice boats at Nedow’s Bay were all parked with no pilots or wind to sail with.  Met one… Read more » 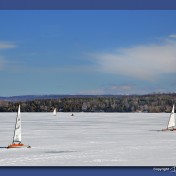 Still a little nippy, but a blue sky and puffy white clouds make that nippy feel not bad at all. This is especially true when the wind is one mile per hour out of the southwest.  The icy and hard crested snow is melting away making it a little easier to navigate the rough terrain. Total ice cover on the entire… Read more » 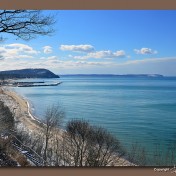 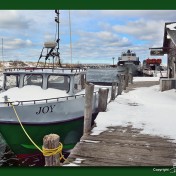 Our first stop in the morning is Fishtown and next… Van’s Beach.  This is the reason you see the picture above so often.  We started out our day with a dark cloudy sky and occasional flurries.  Looking at the horizon to the west, there is some clearing.    This afternoon patches of blue started to show through and it looks like it… Read more » 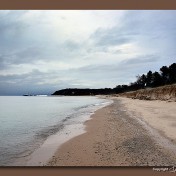 Looking at the above pictures of South Beach is significant because I haven’t had access to the shoreline due to the height of the wall since early winter.  With the lack of snow on the beach there has been a lot of traffic including the rock collectors and dog walkers.  But I discovered this morning, stairs created by all the… Read more » 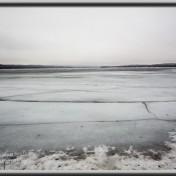 Leap day is here! Do something fun today. We awoke to another 2″ of wet, heavy snow. The “warm” temps of yesterday dropped below freezing, with wind out of a northerly direction. By afternoon, however, we are seeing bright sun against that snow! I’m adding a few more photos from the Joy’s return trip to Leland. Plus, if you would… Read more » 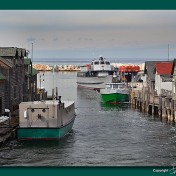 Wow, record high for today was 47 degrees in 1983 and at the moment it is 50 degrees. We were gifted with partial sunshine earlier and it is a nice day so far, but my “Dark Sky” app just informed me that drizzle will be starting in 20 minutes along with light snow (0 – 1 inch) from 6 pm to… Read more » 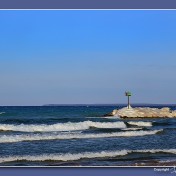 How nice it was to awaken to clear skies and rising temperatures.  It lasted the morning and by early afternoon… mostly cloudy.  The wind is still a major factor, but a impending storm with prospects of 22 inches of new has been shelved, at least for the moment. I missed the JOY being returned to Fishtown as I drove to… Read more » 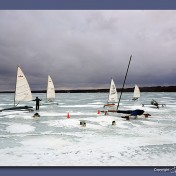 Overnight Big Blue throttled down a whole bunch of mph’s.  People who come down here to the shoreline often pause for a minute or two facing the islands and look like they are saying a few words before heading south. Below a group of ice boaters preparing for a great day on probably the best ice conditions in years.       … Read more » 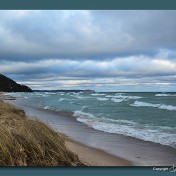 No snow at get-up time, just a lot of wind gusting to over 30.  We live downhill to the western breezes and hear the roar but don’t feel the full force of it as it goes high over our heads.  At the shoreline is another story.  It’s difficult at times for me to stay on my feet, especially when I’m taking a… Read more »