Biscuit and I decided to check out the Little Red Schoolhouse and found it to be in excellent condition, especially with it’s new coat of paint. Just beyond, around the bend the destruction began.  Trees were flattened on both sides of the road.  The power was still out in the Glen Lake Area at noon,  9&10 News reported 9,000… Read more » 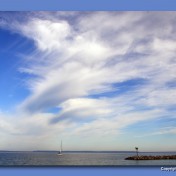 It was the kind of day you would like to drive around the countryside and Biscuit and I did. . 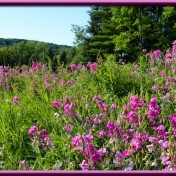 We are in the middle of a series of days that are quintessential Leelanau days: bright, vivid colors, blue skies with a touch of wispy clouds, sunny, enough breeze to sail, warm enough during the day to enjoy being on and in the water or out and about on local trails and dunes, and cool enough at night for a… Read more » 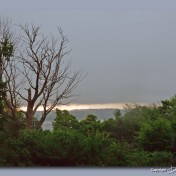 Mid-morning the sky darkened and the “Dark Sky” app on my I Phone started alerting that possible severe weather is on it’s way. The “Radar” app confirmed that with a fast moving, very red graphic headed for Leland.  The rain began to fall and power went out.  The internet remained until just before noon and it went out.  Logged onto ConsumerPower.com on… Read more » 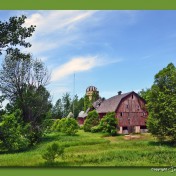 Not really sure what this barn looked like when I pushed the shutter button.  We were returning from our annual visit to our eye doctors.  Nice surprise when I opened it up in Photoshop.  It was a very nice day in Leelanau County

The Monday morning haze is melting away to reveal another perfect Leelanau morning. T’storms predicted for this afternoon, however. (Last photo) Jim and family hiked up Empire Bluffs Trail right before the rain moved in. These wild lilies dot the steep hillside