“The most beautiful music in the world is your own heartbeat, it assures you that you will survive even when the whole world leaves you alone.” 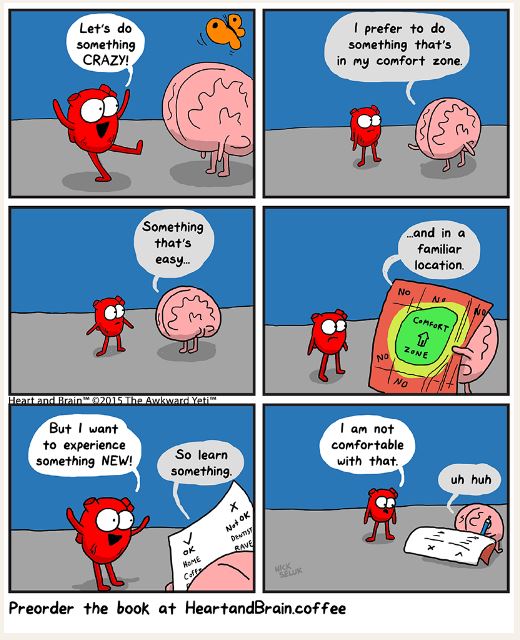 There was a six hour break between sessions. The bouldering session was not going to start until 4pm and I didn’t even know where that was meeting yet.  After breakfast, I said goodbye to Tom and his companion and went out to Airport Rd, where Last Dollar Rd starts on the south end, to see if I could grab a shot of three barns I was told about by my cousin. I was staying at her in-laws beautiful home downtown and was told they might like to have a good shot of them against Mt. Wilson. The clouds were starting to build now so It was a good a time as any. Plus, I wanted to drive the entire length of Last Dollar Rd and these barns were on the way. I had five hours.

“This is plenty of time to take pictures and drive the 20 mile route” my heart told my brain.

And my brain looked at my heart and said, “Idiot, we’ve been through this before, you know.”

“Yeah, I know, we can do it this time”, my heart said quietly, knowing it was a lie.

I wasn’t disappointed in the three barns. I had some clouds and everything was lit up nicely. But I wasn’t completely sure I got what i was looking for. 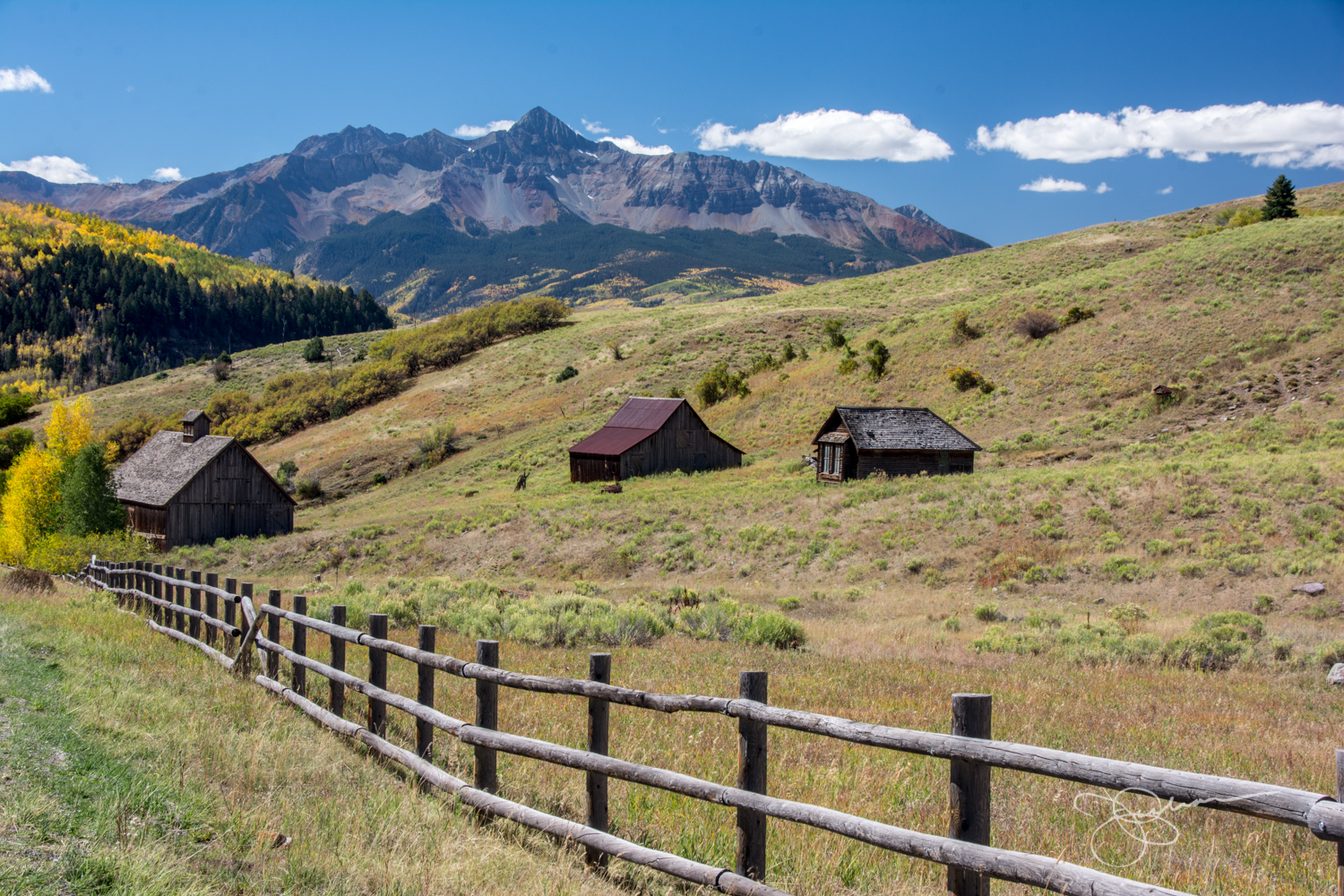 These barns are a favorite spot for photographers. It’s a spectacular vista as you come off of Last Dollar Road. There are probably hundreds of thousands of photos out there. Probably very much like this one, but then again, all different. But I don’t think this had the heartbeat I was looking for.

I decided to continue up Last Dollar Rd and I found I was stopping at least 8 times in every mile to take photos. I felt I needed to at least start my way back to town by 3pm in order to find out where we were meeting and get my gear all ready to go. Now, I really only had 3 hours.

Then, my heart says, “Oh, a grove of Aspens lining the road, STOP!” 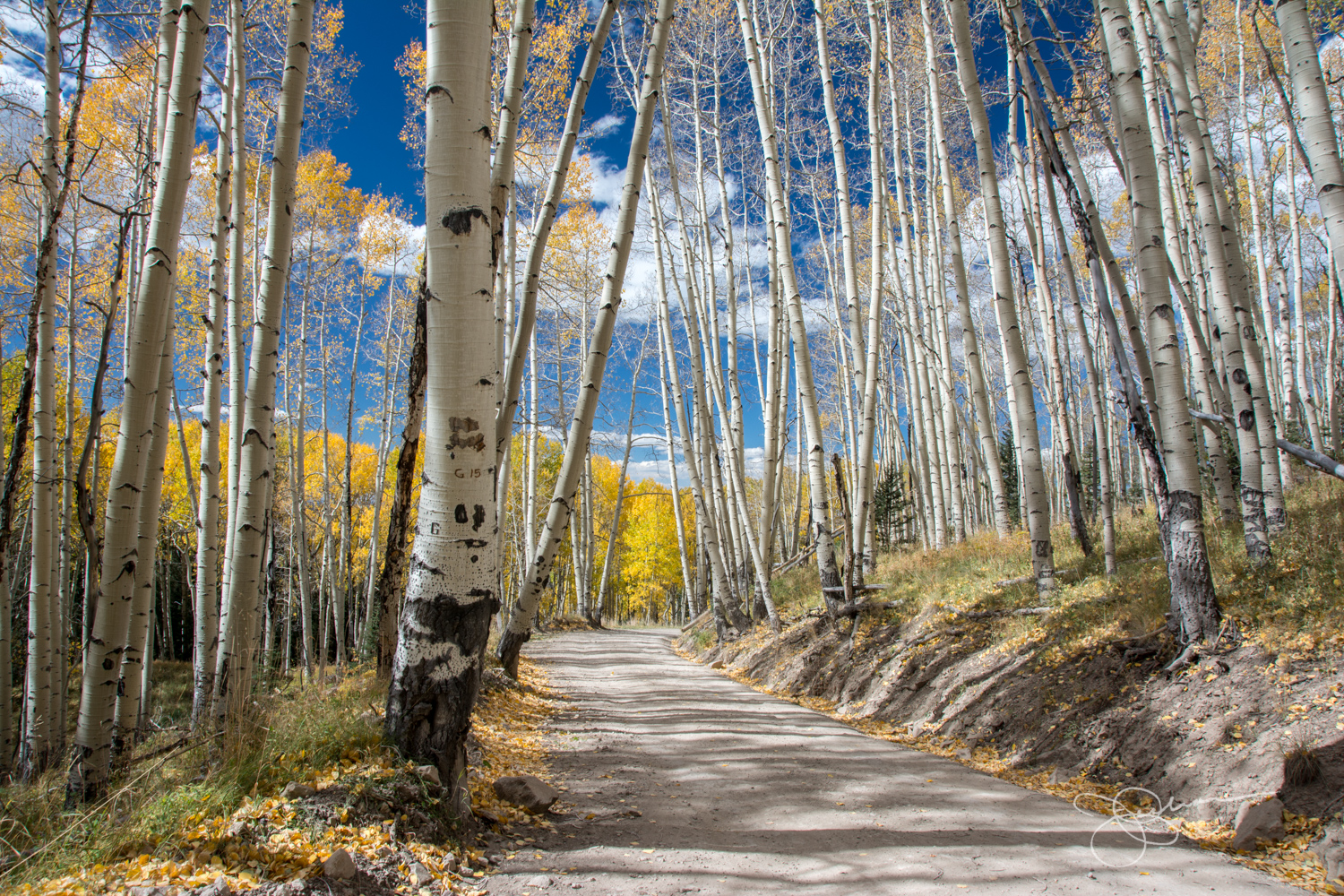 And my brain goes, “If you keep doing this, you will be late and you have no idea where you are supposed to going yet to even be late to it.”

And my heart responds: “Ooooh, mountains! Get out your polarizing filter”

Oh yeah, crap, I have a polarizing filter, and it’s not on. 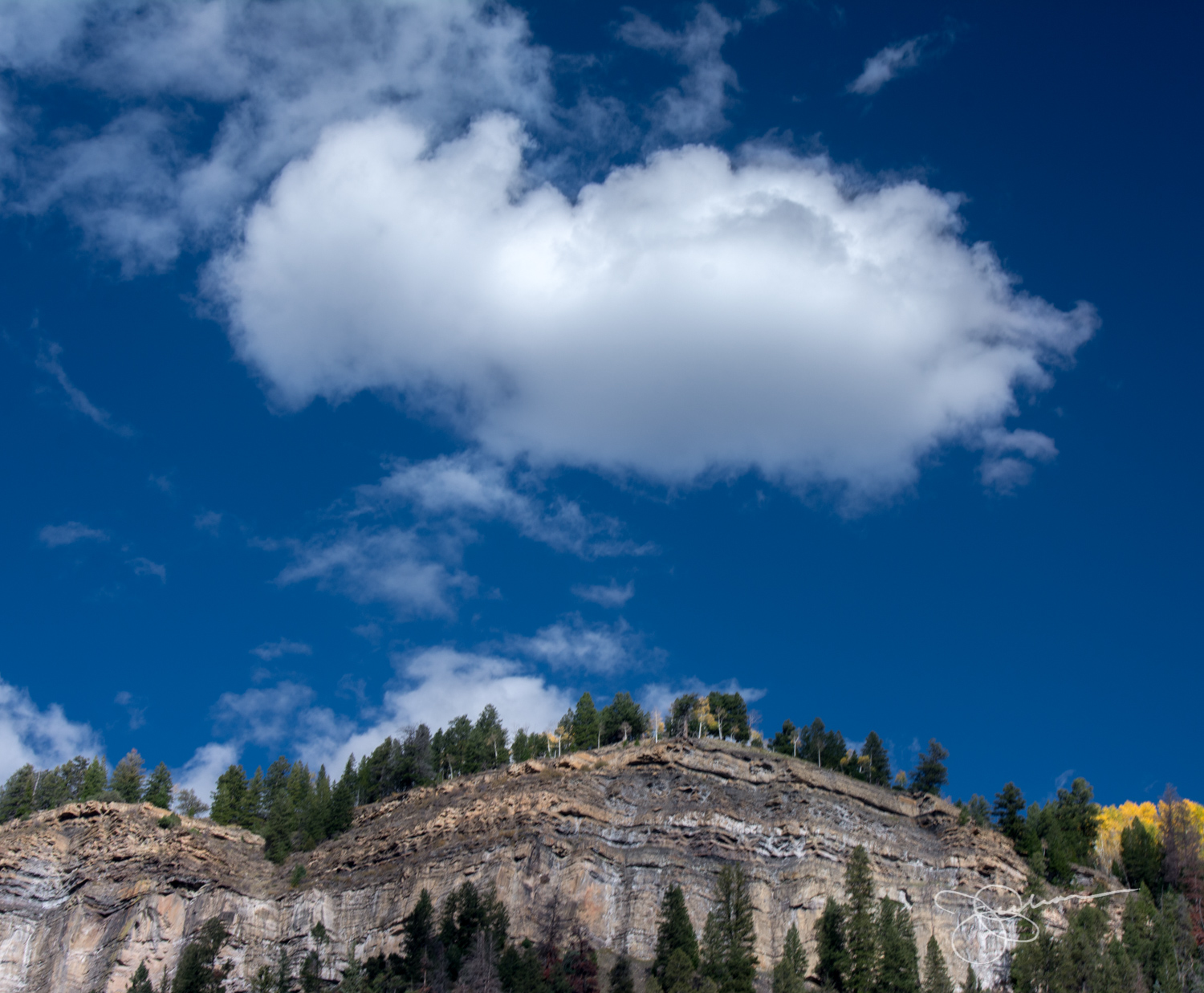 And the dance continued up the mountain…

Colorado
Pure as sunlight in the snow
Like a thorn, it’s buried in my soul
A couple days is not enough to tell
If I lost myself, it’s just as well
And as the fading sunlight drops below
Another day and then I’ll have to go 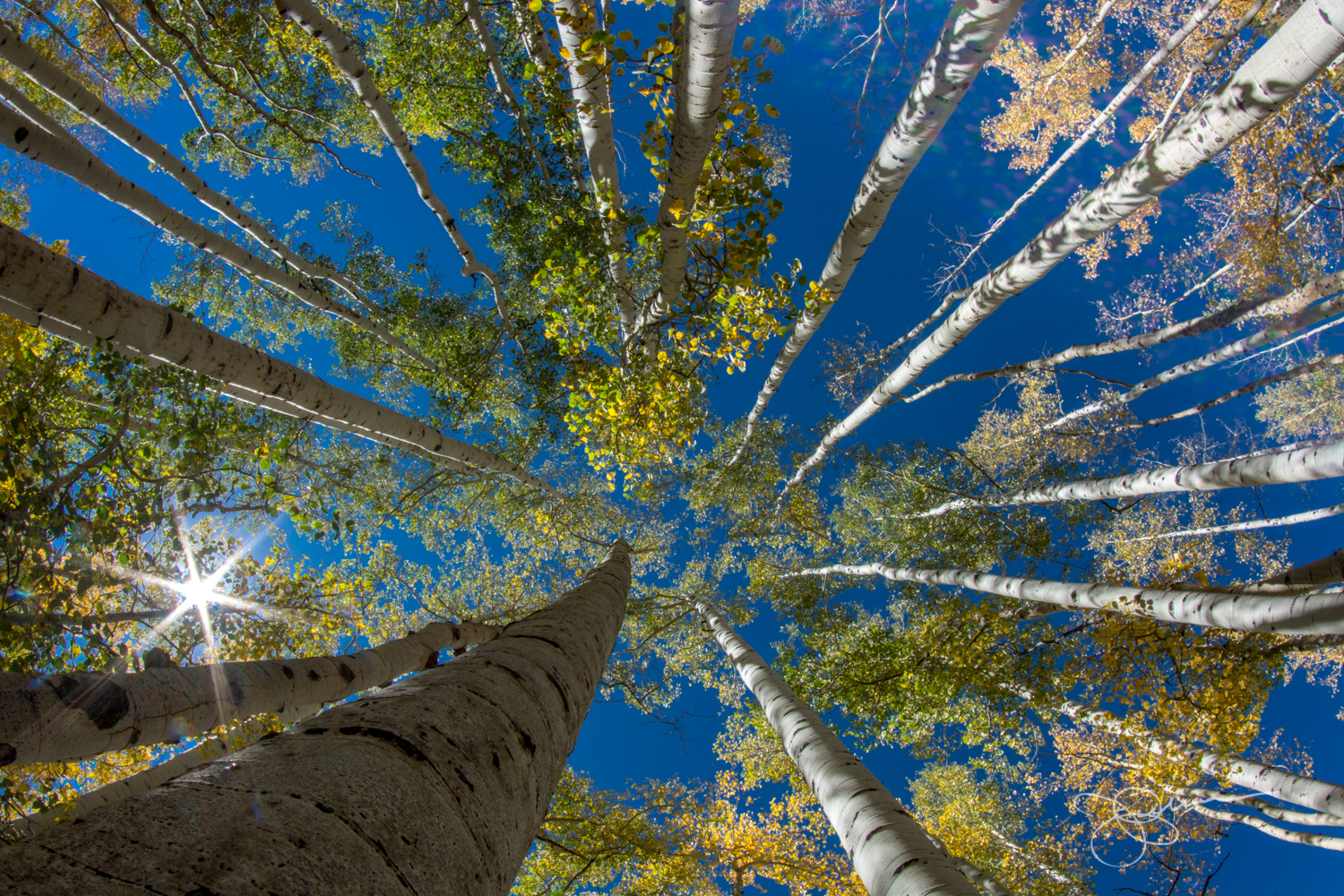 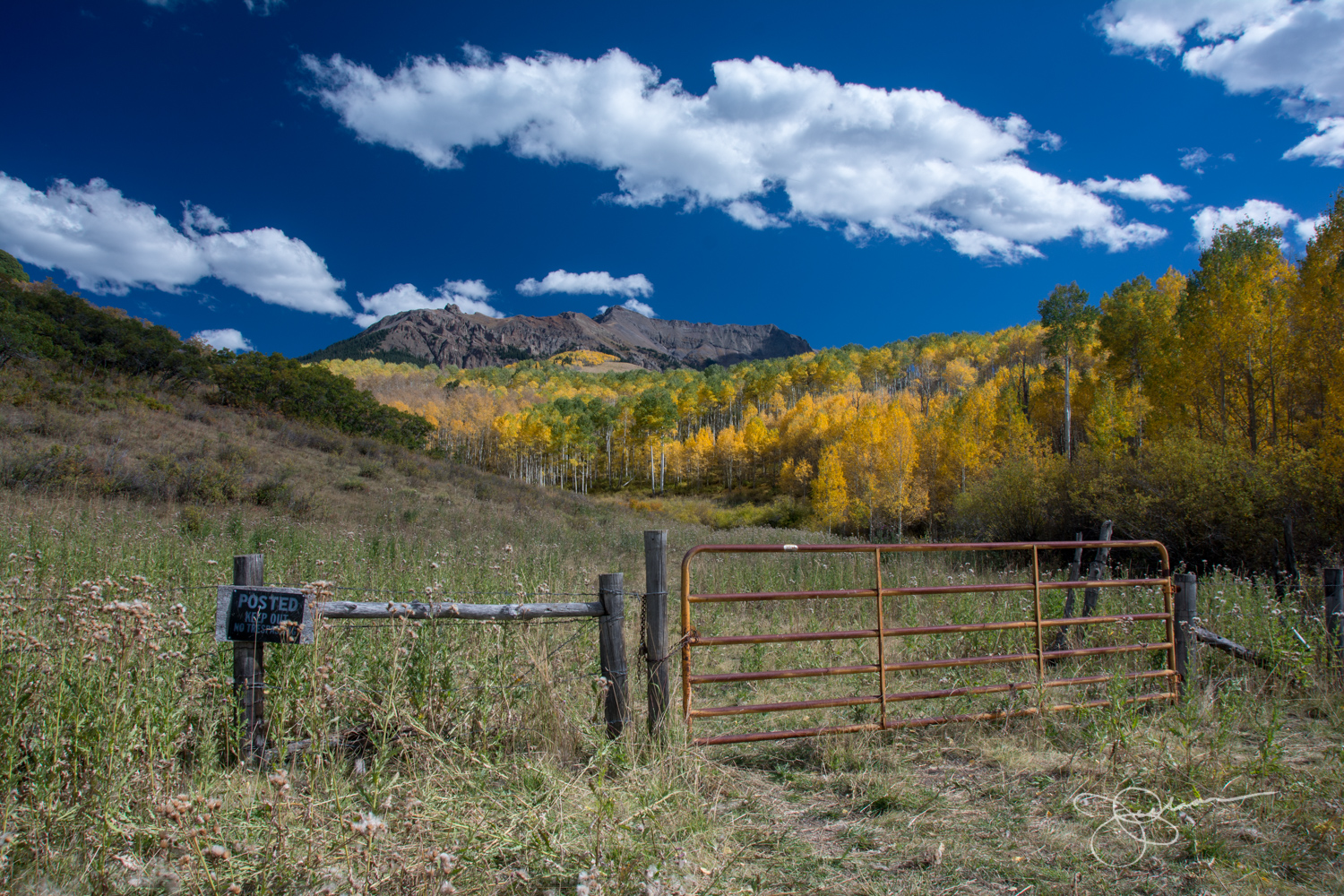 Colorado
Pure as sunlight in the rain
Like a drug, it it’s buried in my brain
A couple days is not enough at all
But it’s ok, I’m not too high to fall.
And if I left my heart up there to sell
I might buy my ticket out of hell 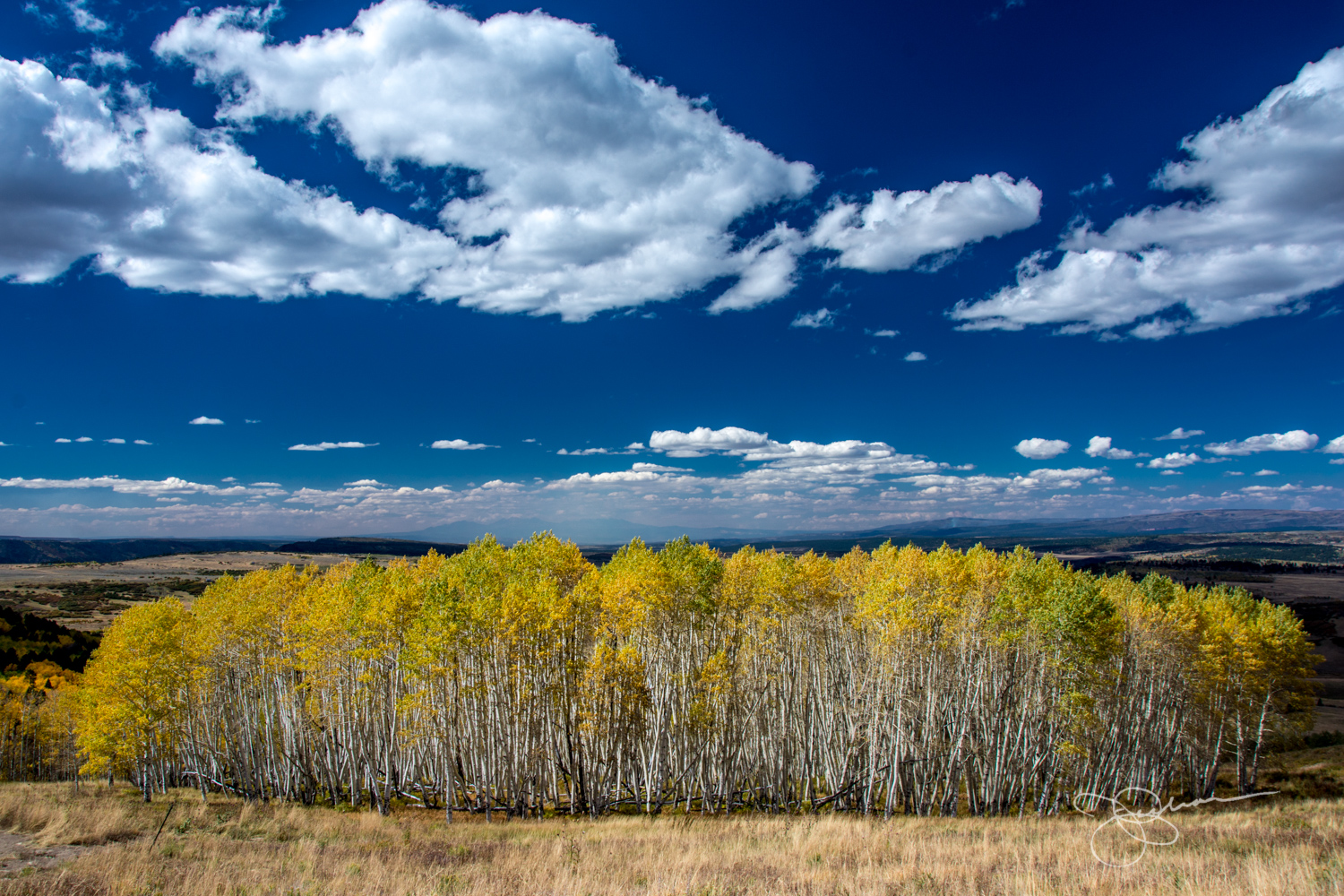 The effect the polarizer had on some of the photos was dramatic.

Here is a comparison between one and the other. 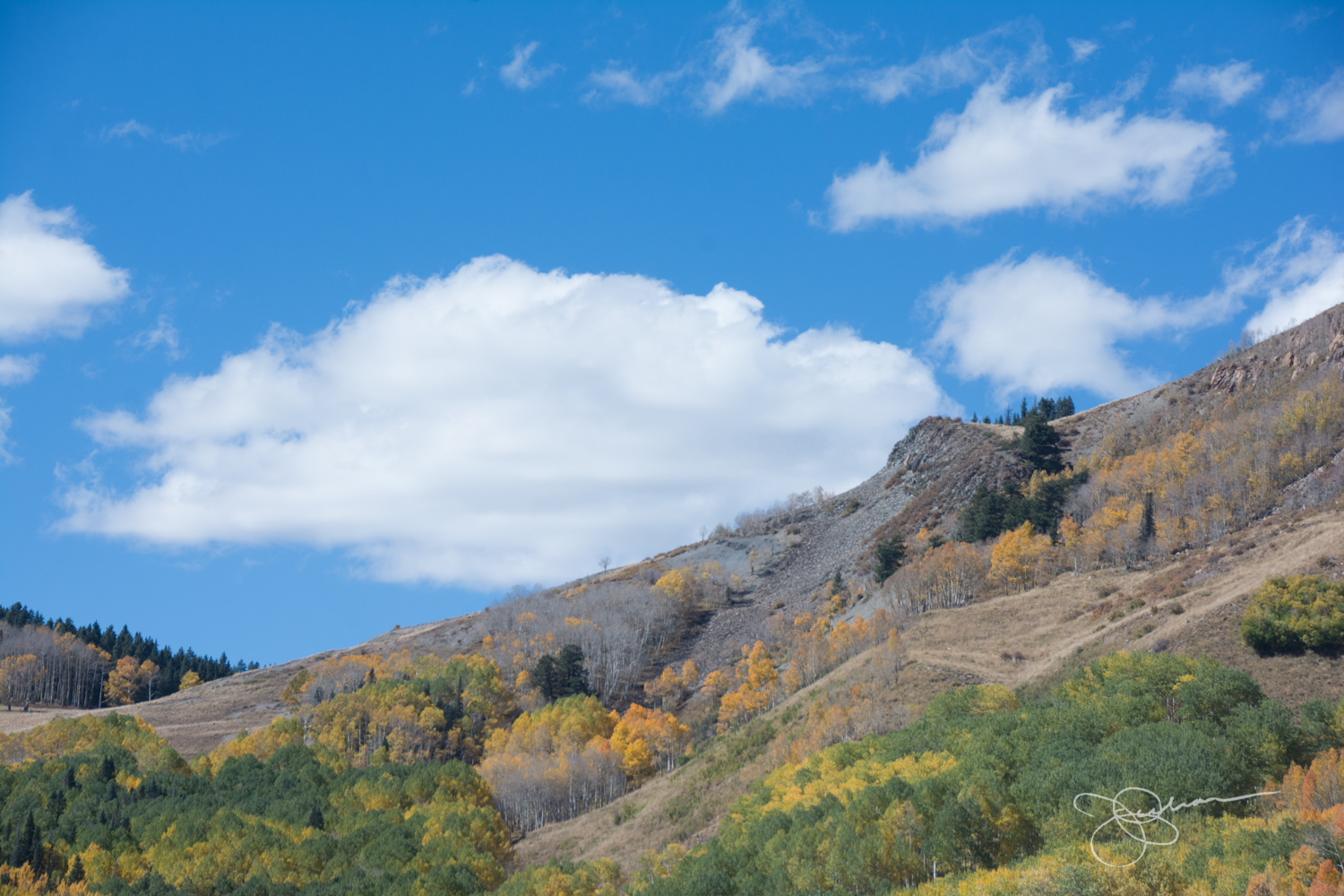 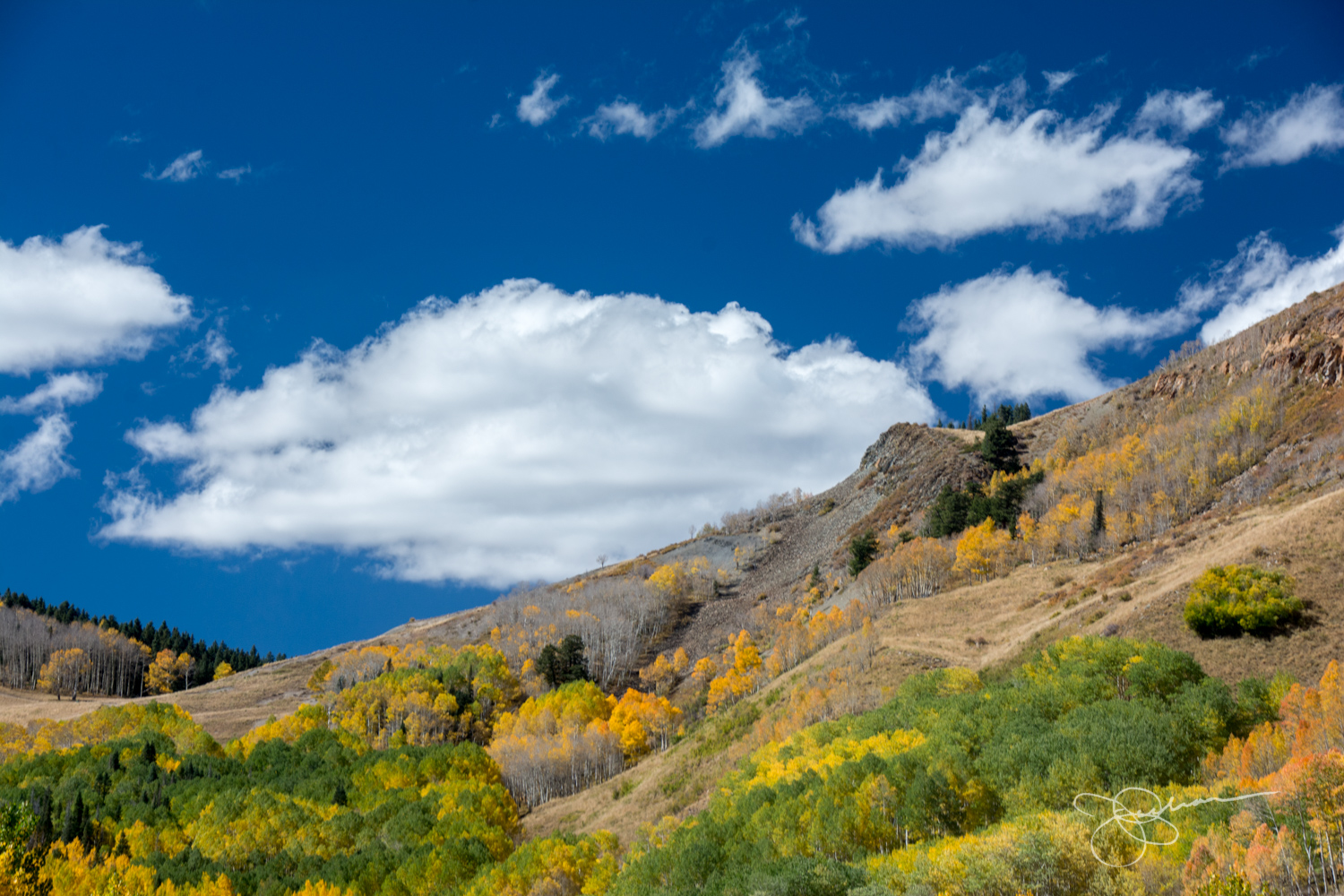 Polarizing makes clouds and the colors pop, but you lose a stop of light. But there was plenty of light. But it works the best 90 degrees to the sunshine and not as well with wide angle. Use one judiciously.

Eventually, I had to give up and get back to Telluride. I was near 58P again, like the night before, so I took that again through the switchbacks into Sawpit. This time in the light.

Ok, then. My brain has given up at this point. Logic does not exist. Time is only gravity in space. (that was for you, Steve B.) 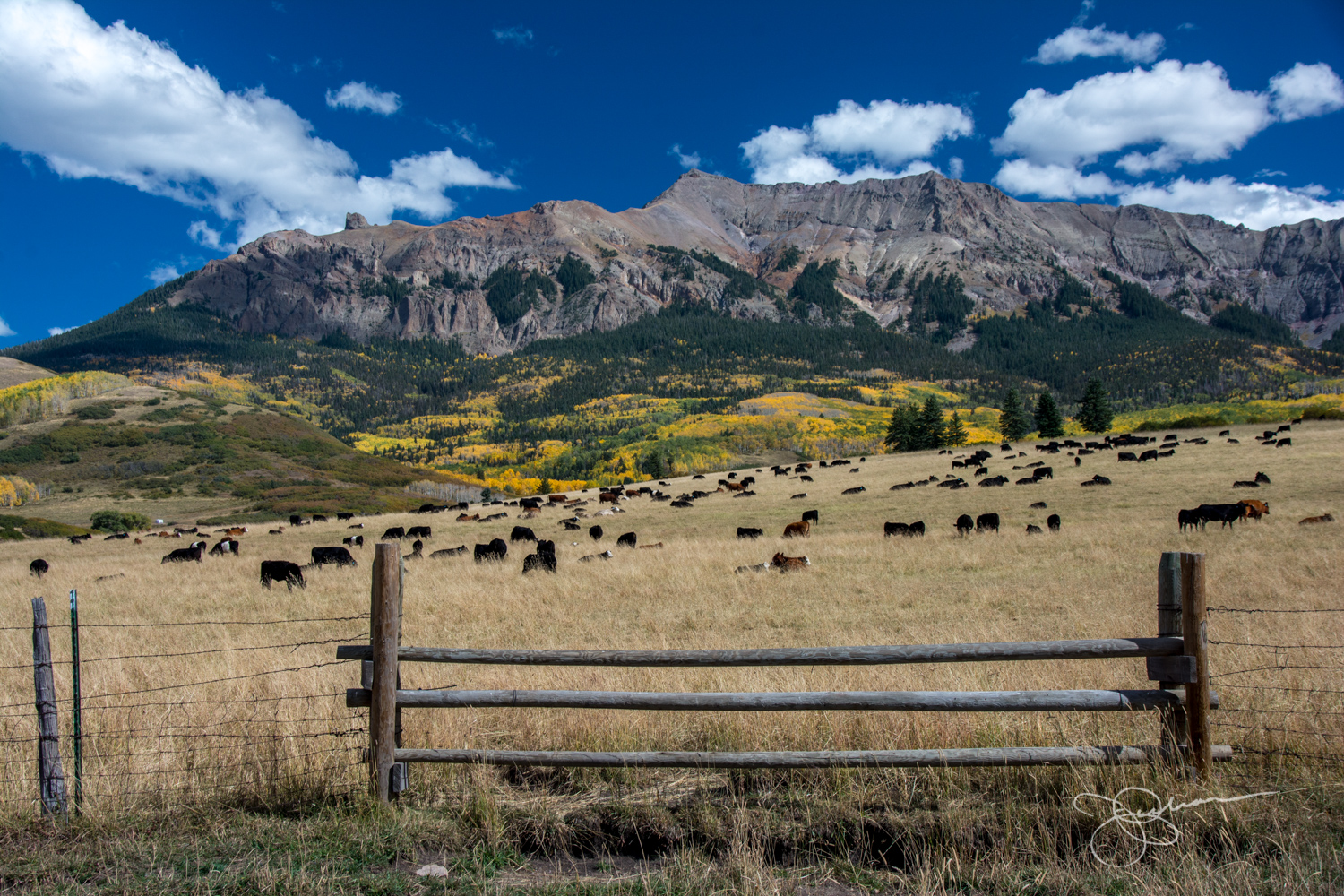 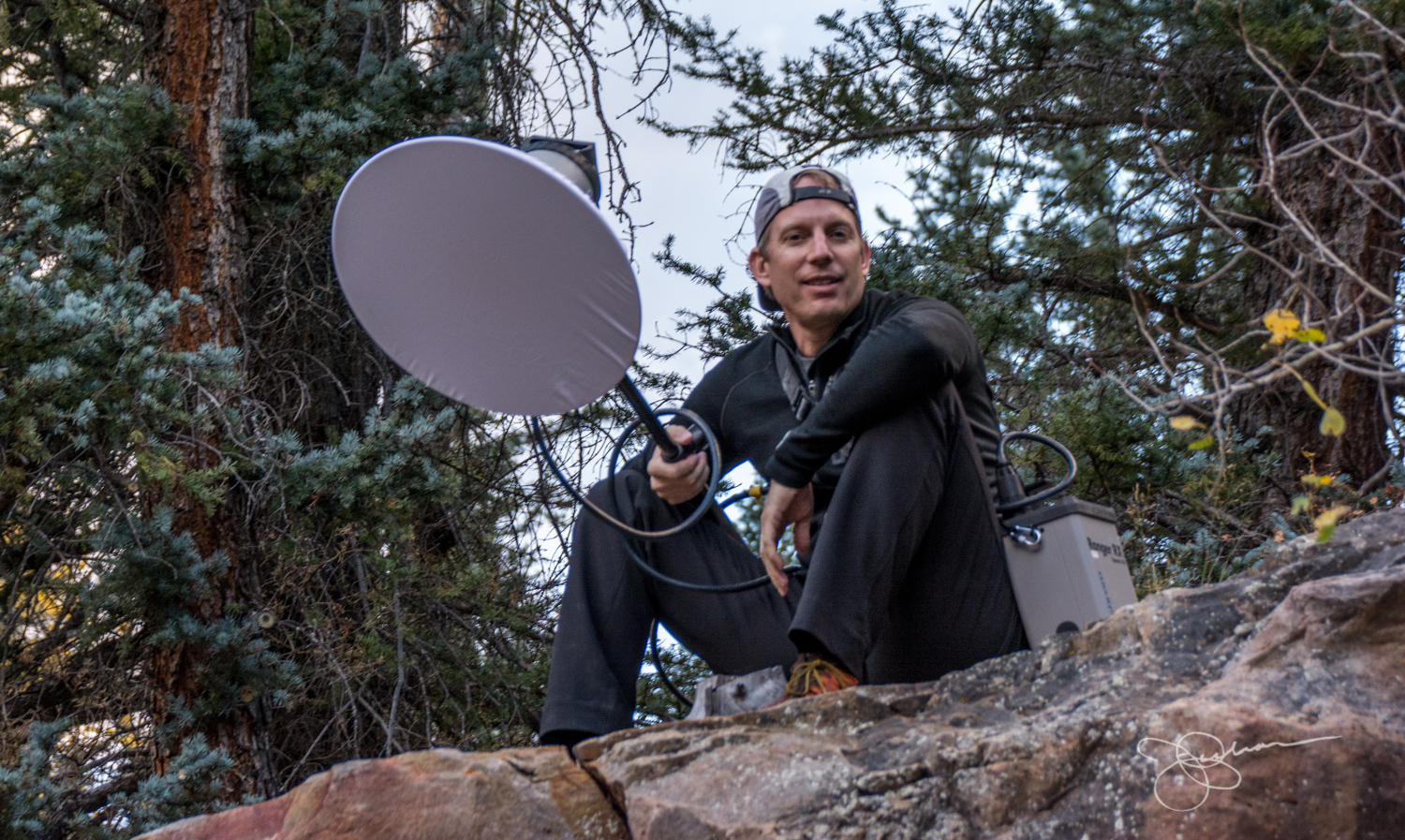 Red Bull in hand as expected, Michael Clark met us all in front of the Sheridan Opera House in Telluride at 4pm. Two members of my morning excursion were with us. Our goal was to journey out to some large boulders West of town to learn some techniques on shooting climbers, using fill light and accent lights, etc. Our subjects were Nick Niebuhr and Chris Brooks, two local climbers who were very patient dealing with the group of us as we clicked and circled them like hungry paparazzi. 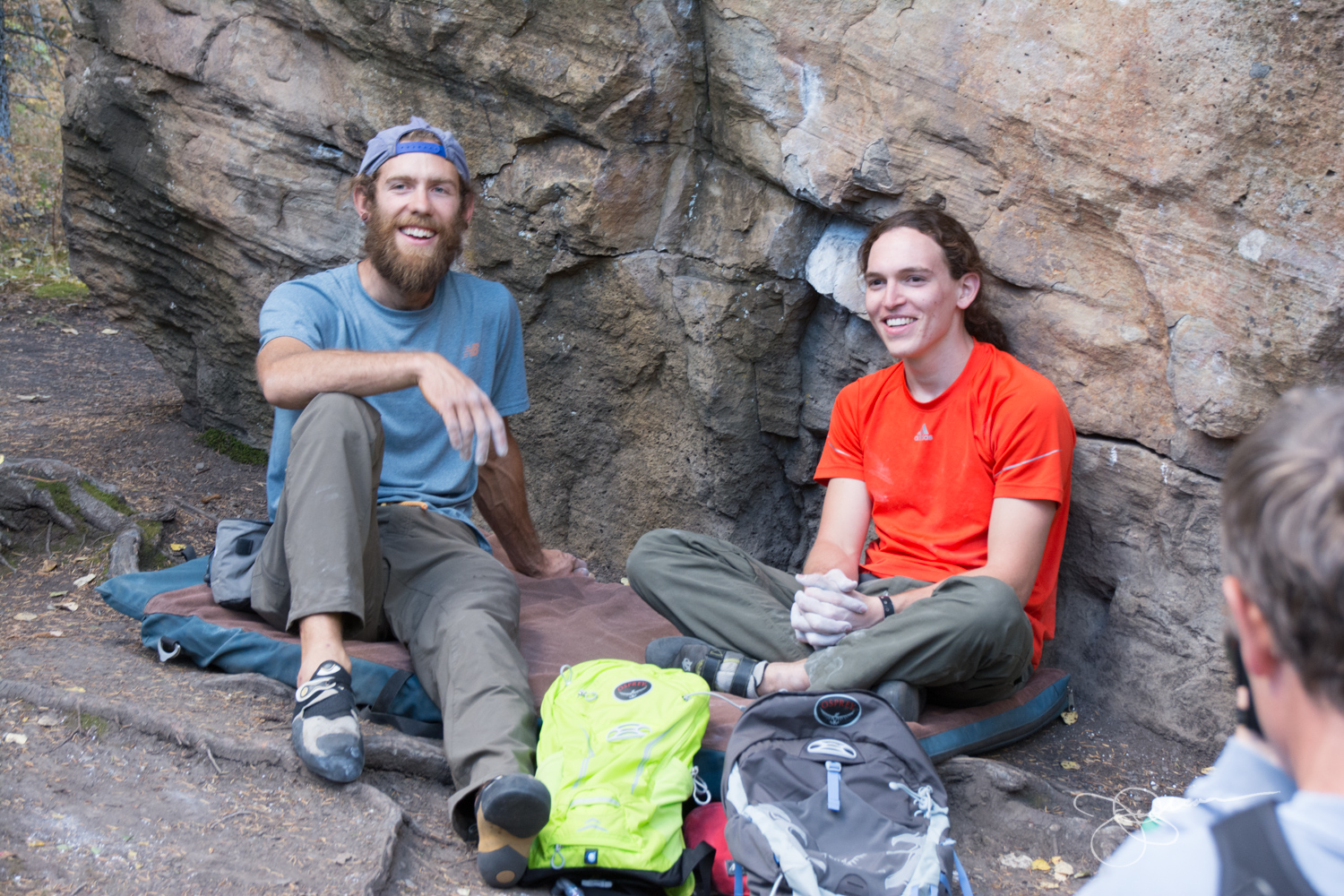 I got to carry a suitcase full of lighting equipment up the hill to where we were shooting. As a manly man, I trudged full speed up the slope. Then I slowed a little, oxygen levels getting low, my feet wrote a check that my lungs couldn’t cash. But I had to make it. It was only 30 more feet. I made it eventually, panting and wheezing like a asthmatic runner in a sawdust factory. Kim came up to me and patted me on the back and asked if I was ok. (She’s from Durango, btw so this must be kid’s stuff for her)

Thank you for caring, Kim.

As for the photo shoot, the rules were pretty simple:

I was doing ok, I guess. 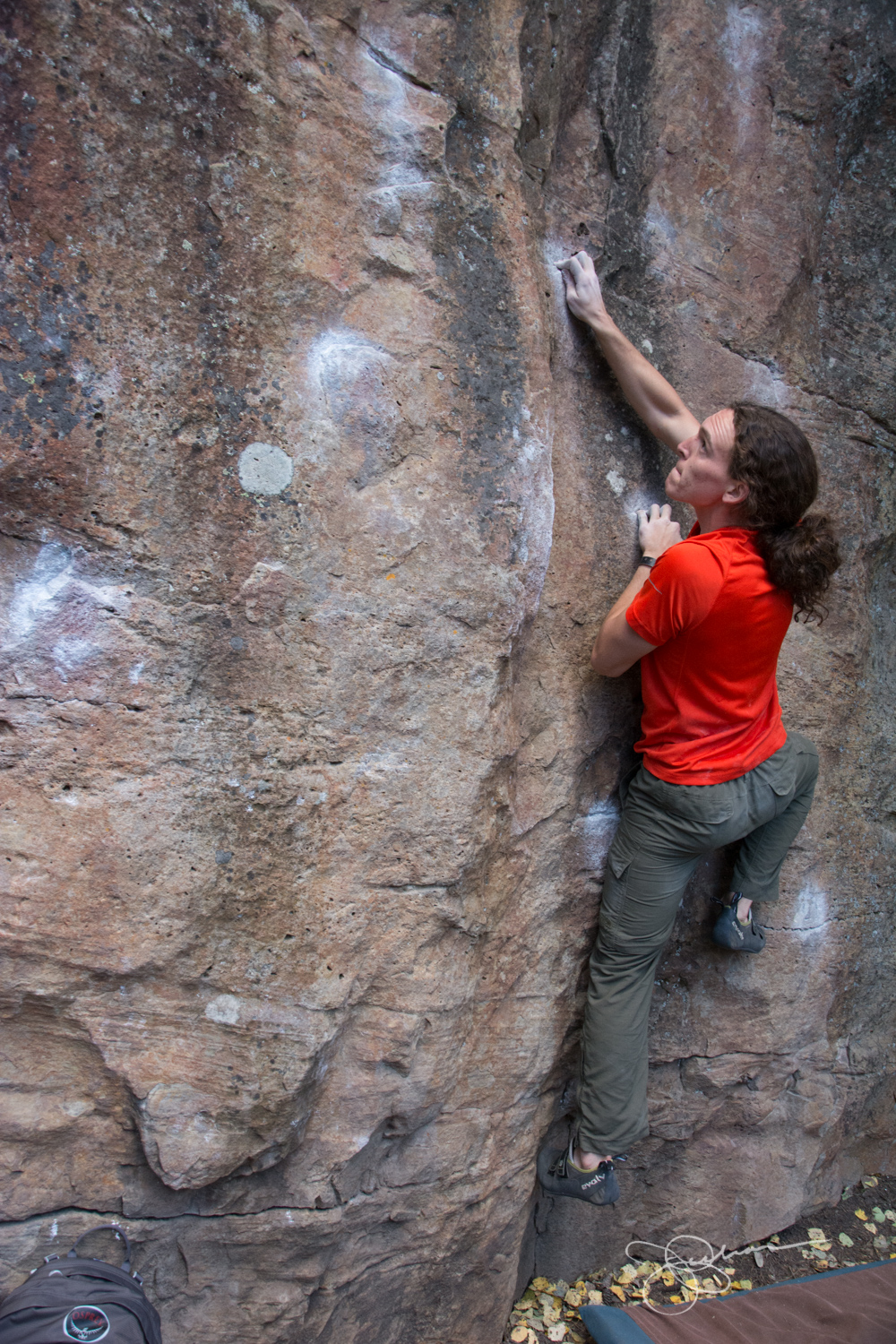 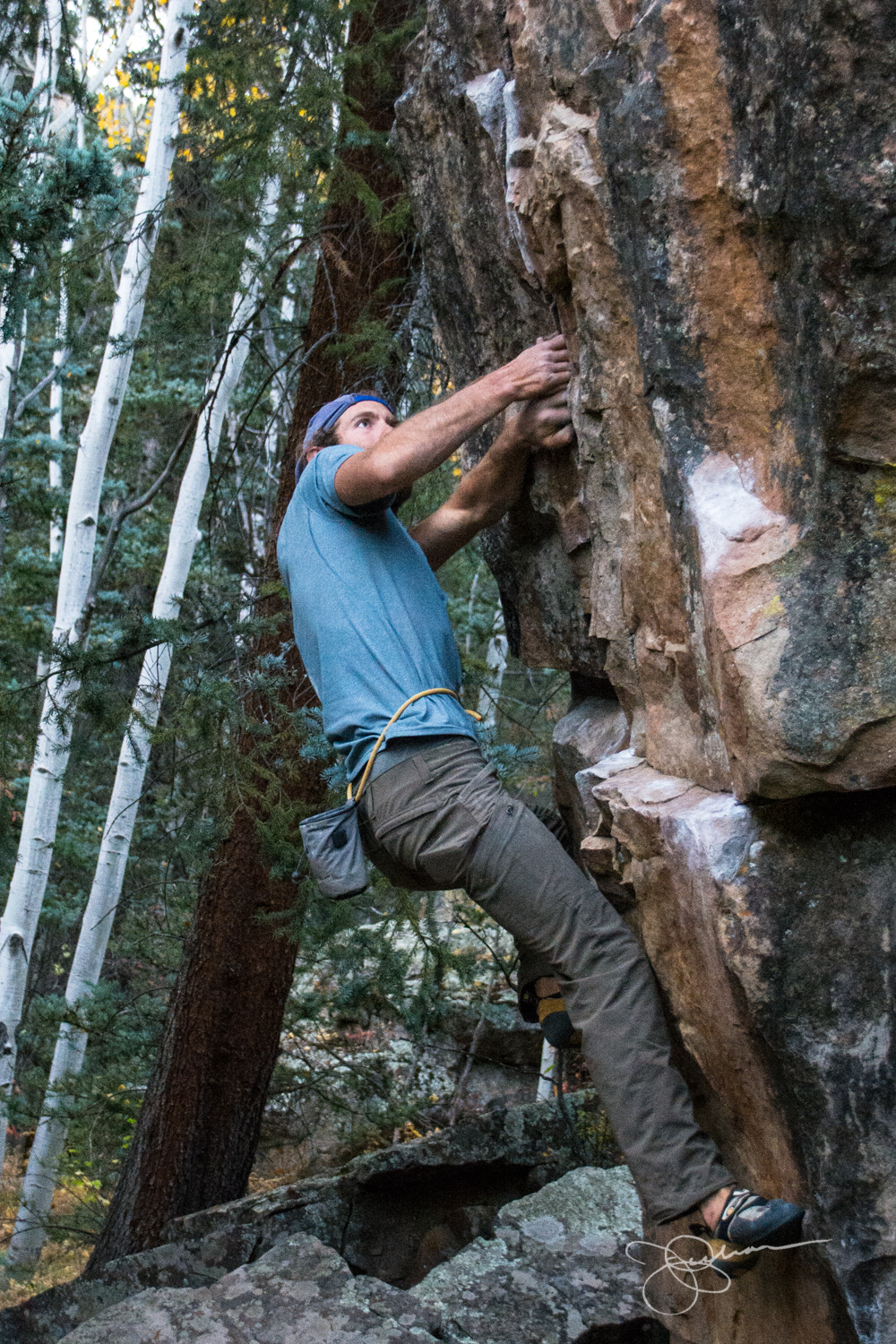 Then I start taking off-time shots 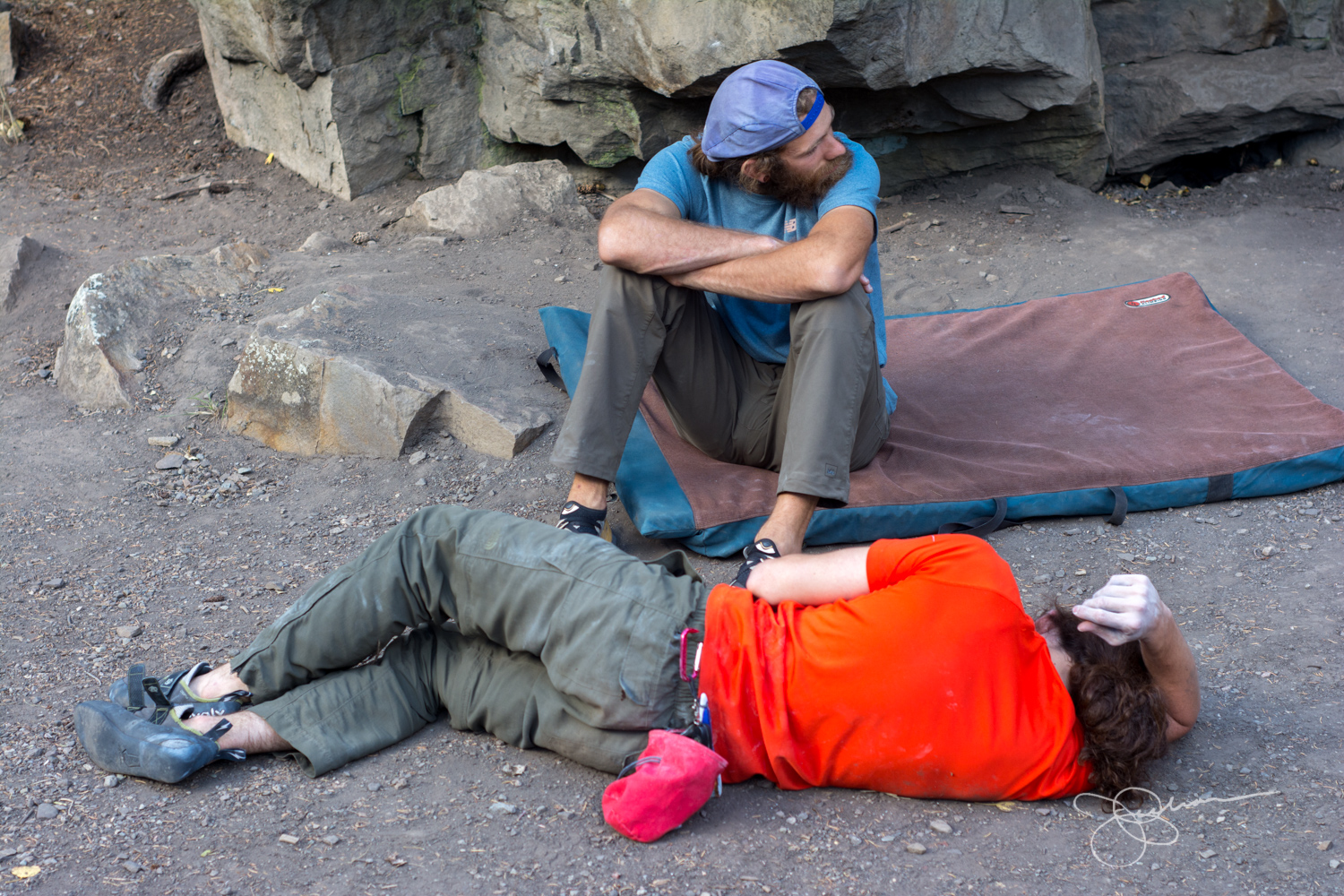 then I start getting more creative. 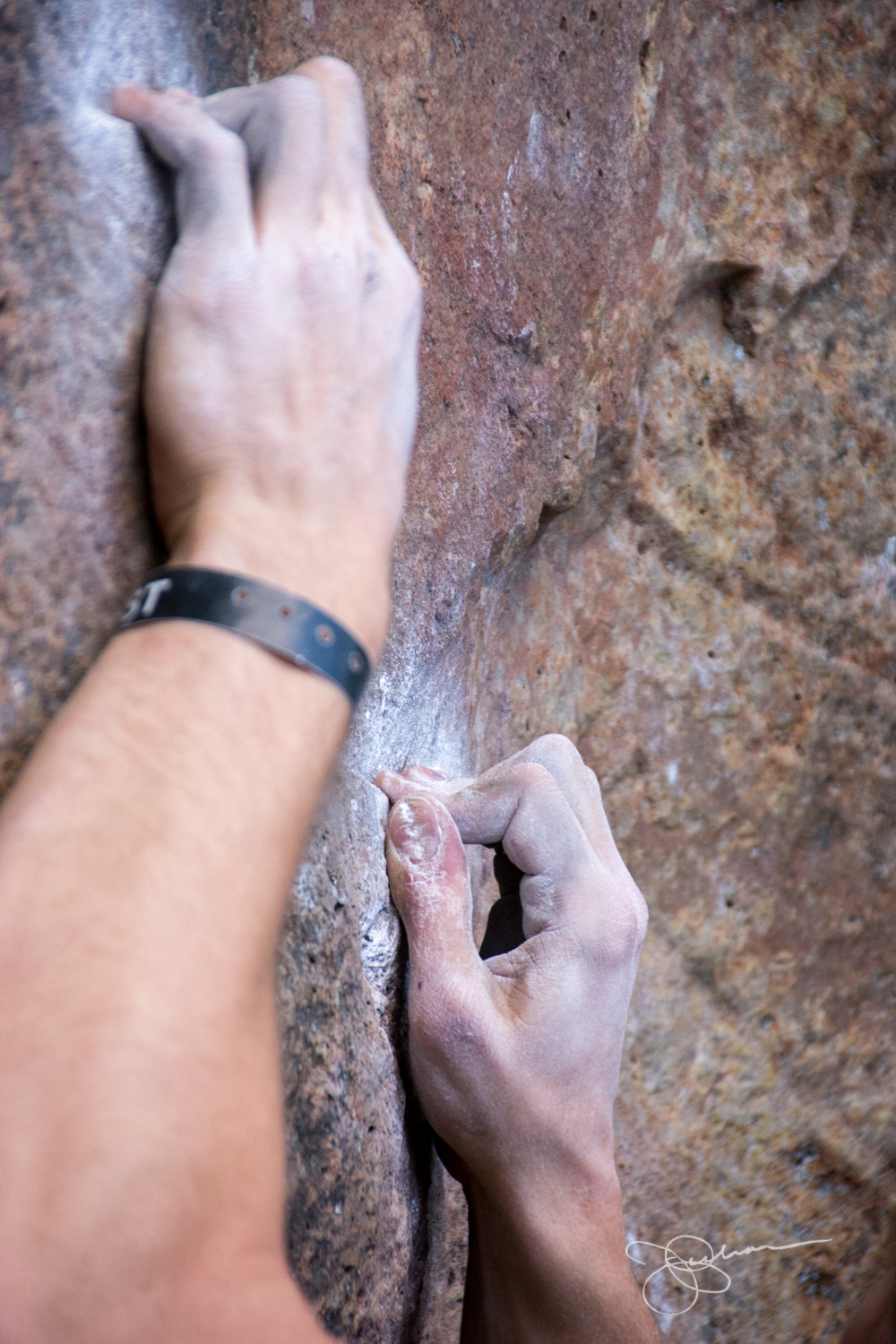 then, I just threw the rules out the window completely 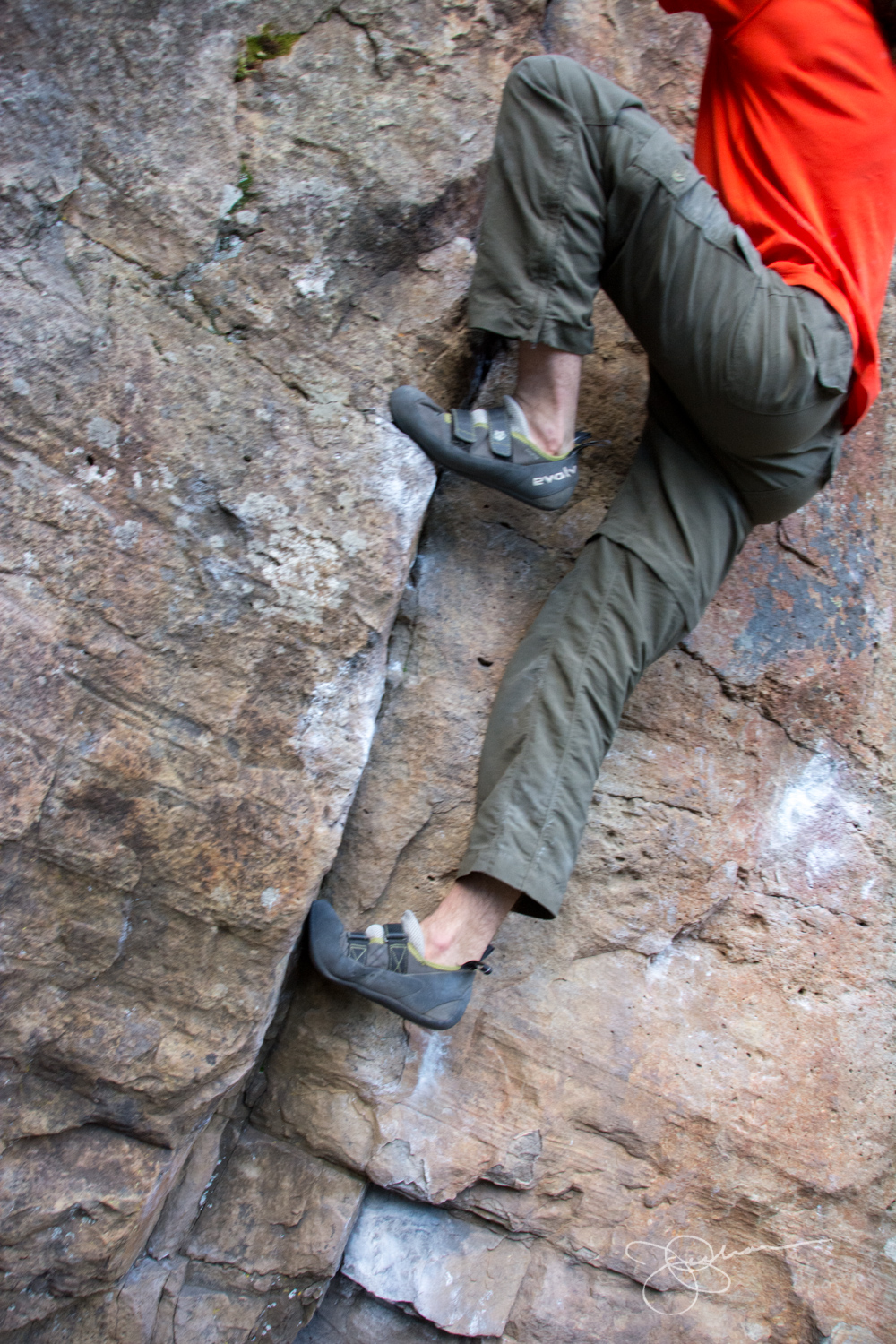 Maybe I didn’t learn anything. 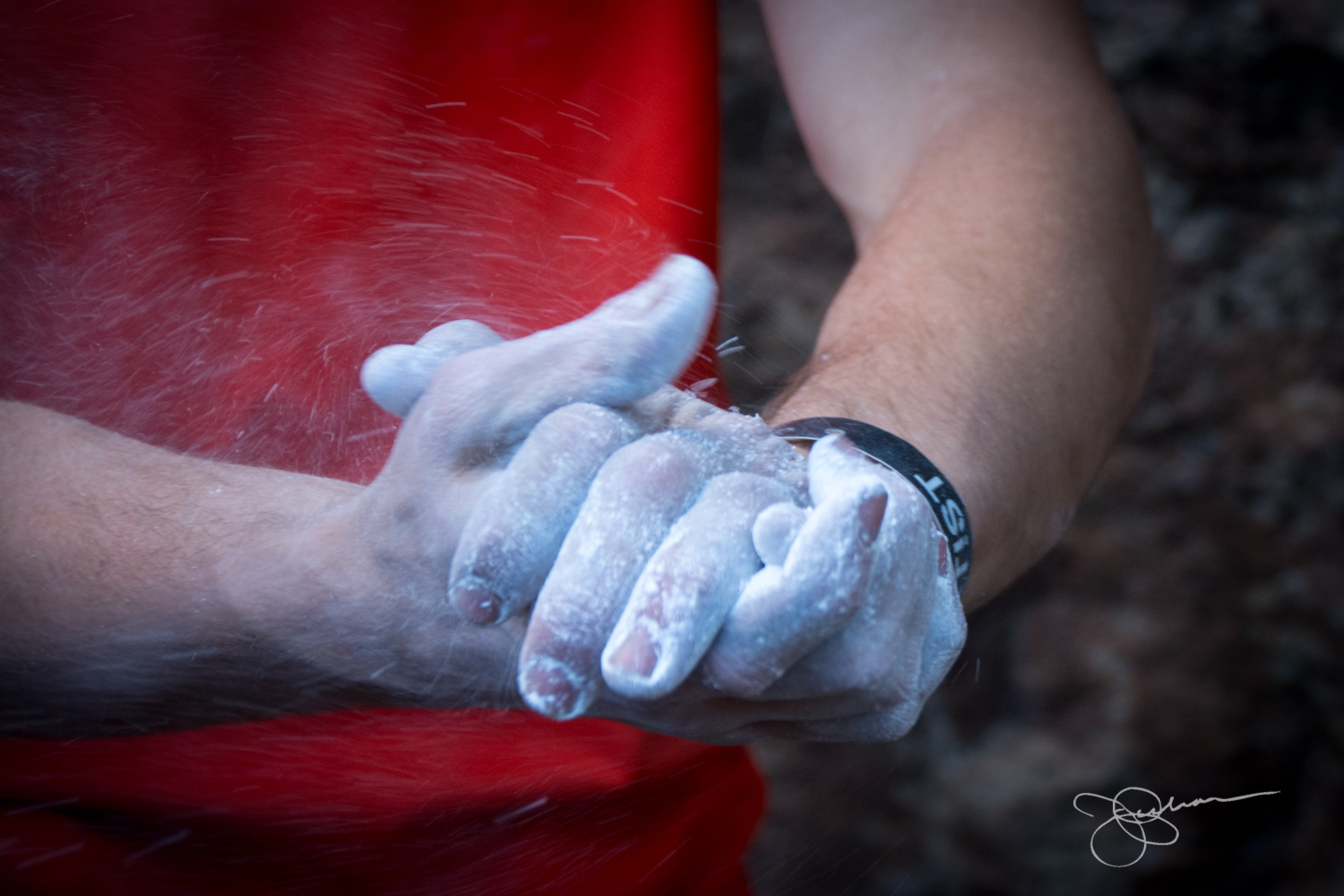 Or, maybe I didn’t go there to learn anything.

I went there to experience it.

But no, I did learn something important 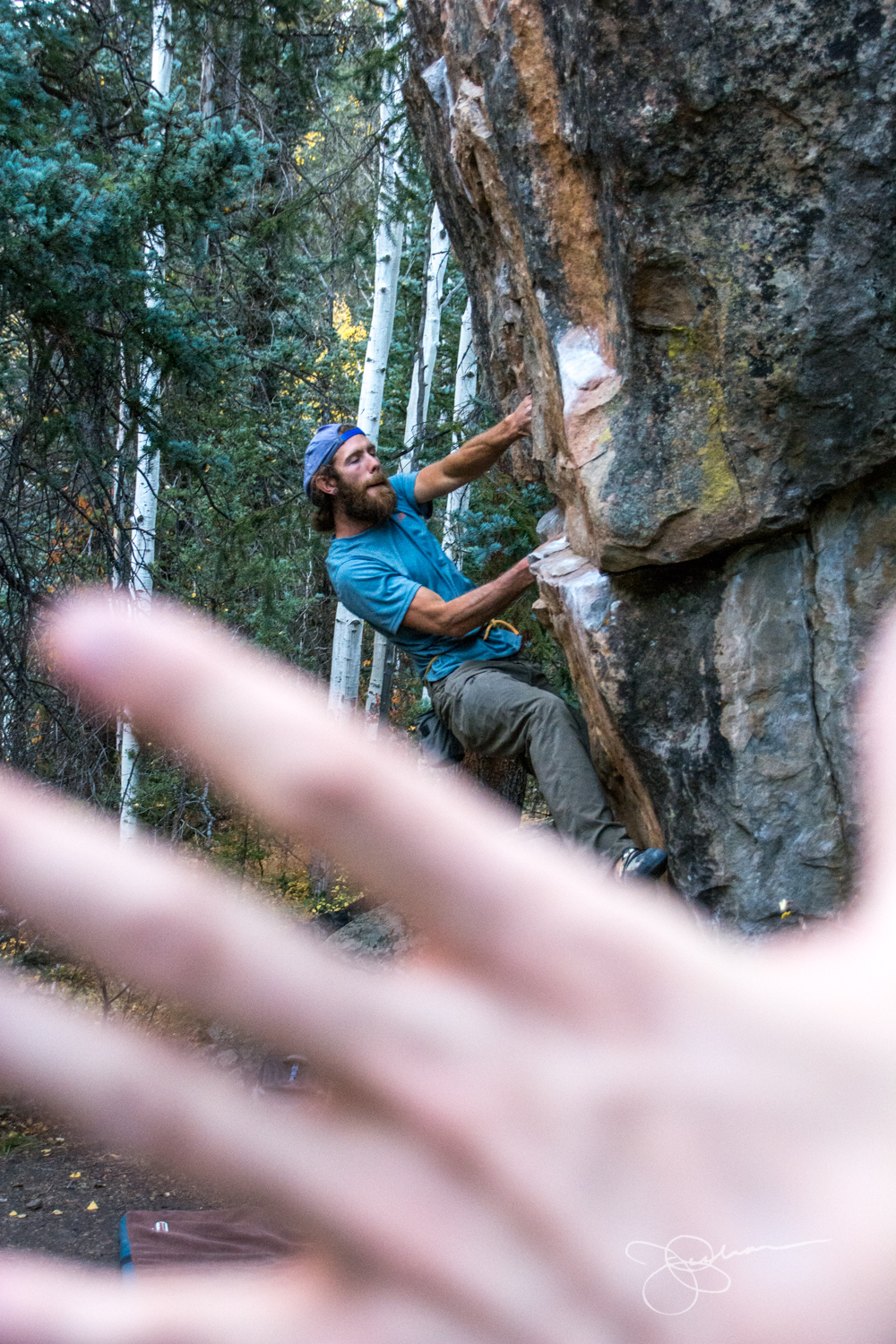 It started getting dark

Michael persuaded Nick to climb with his shirt off.

Then I felt really, really fat all of a sudden. 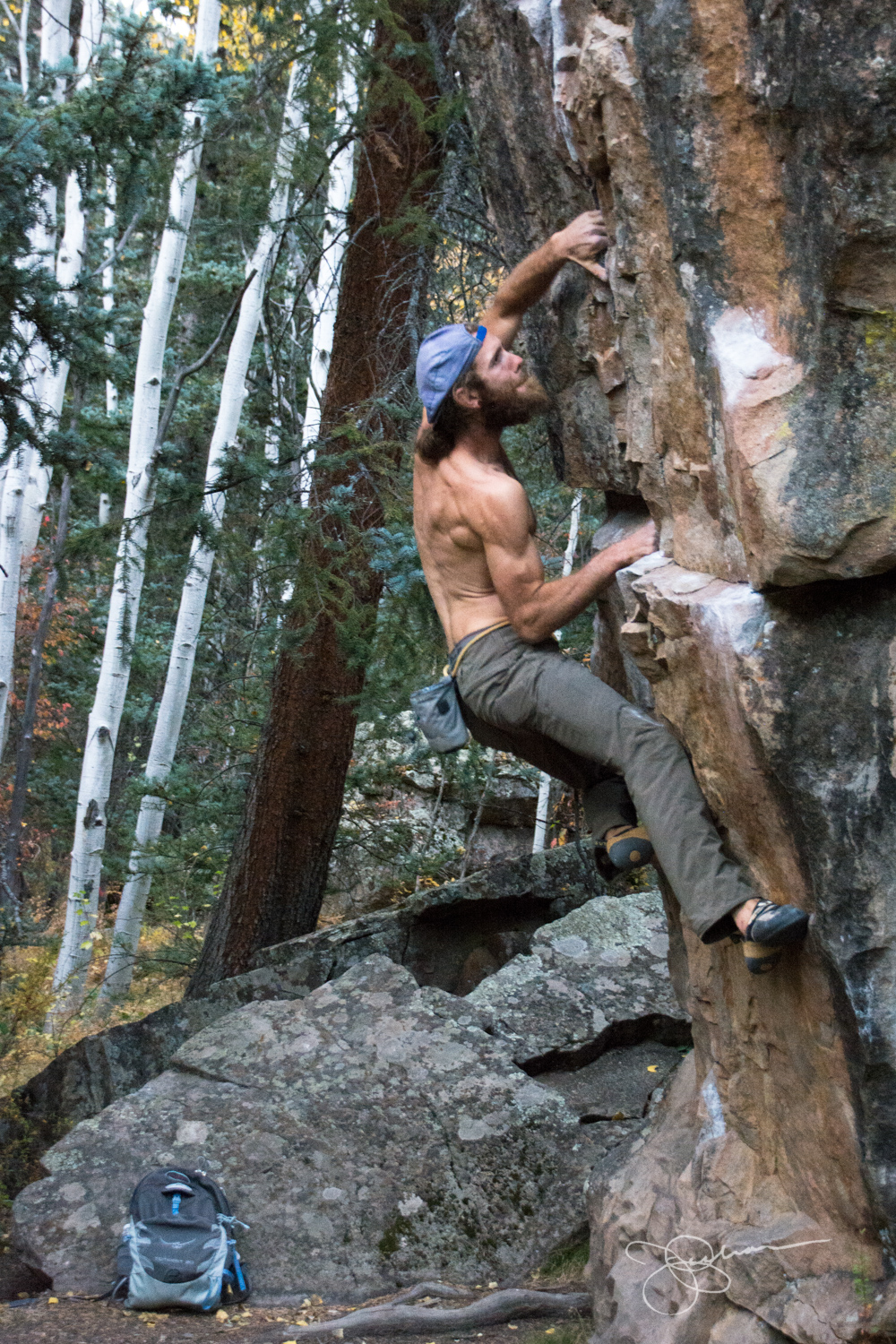 I guess there’s your heartbeat, ladies.

We all traded information afterwards and disappeared into our own lives again. I finally was able to get some sleep that night. My heartbeat was not noticeable at all that night and I slept. My flight out was at 1:30pm so I had plenty of time to walk around Telluride and take one more stab at the Three Barns shot on the way back. 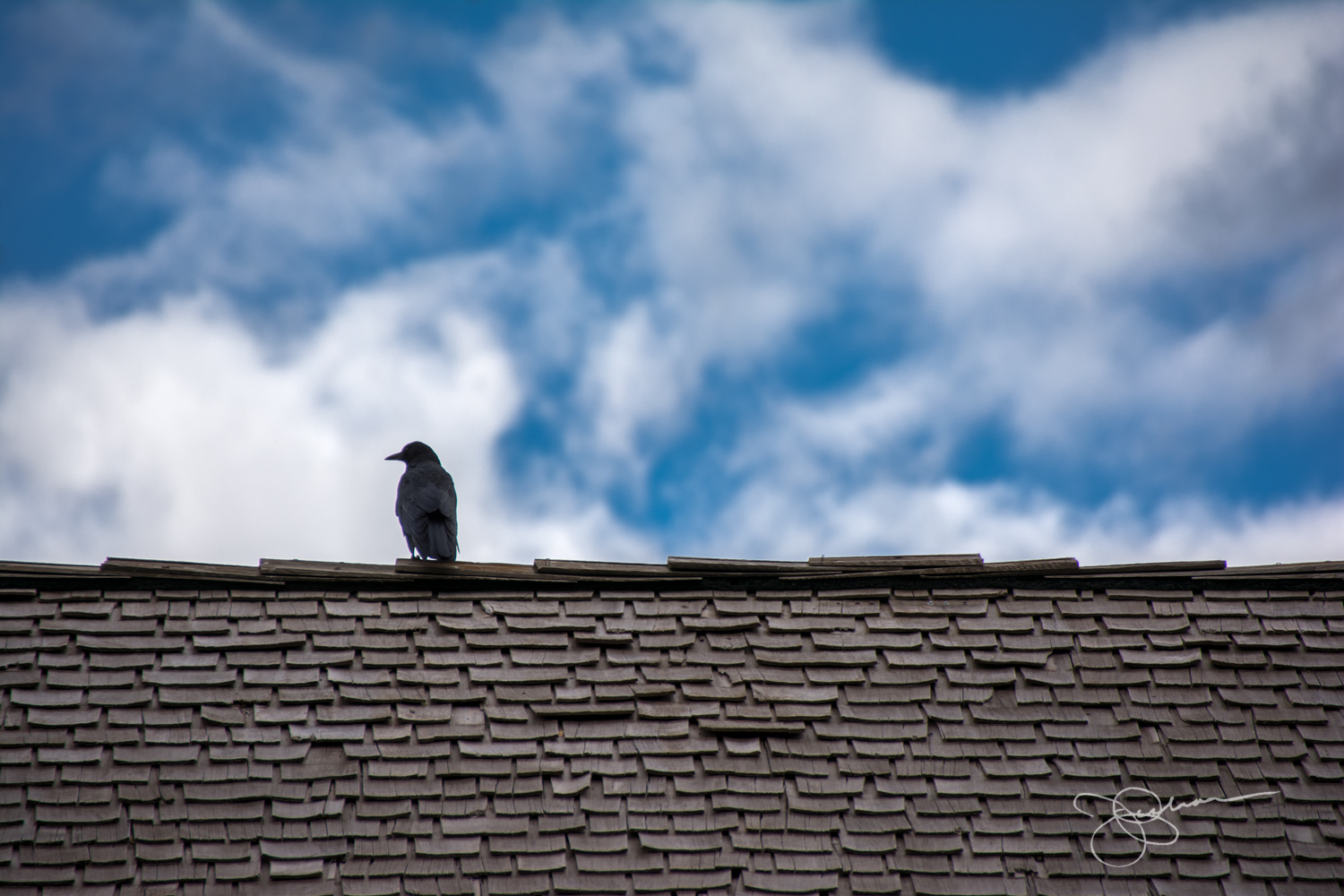 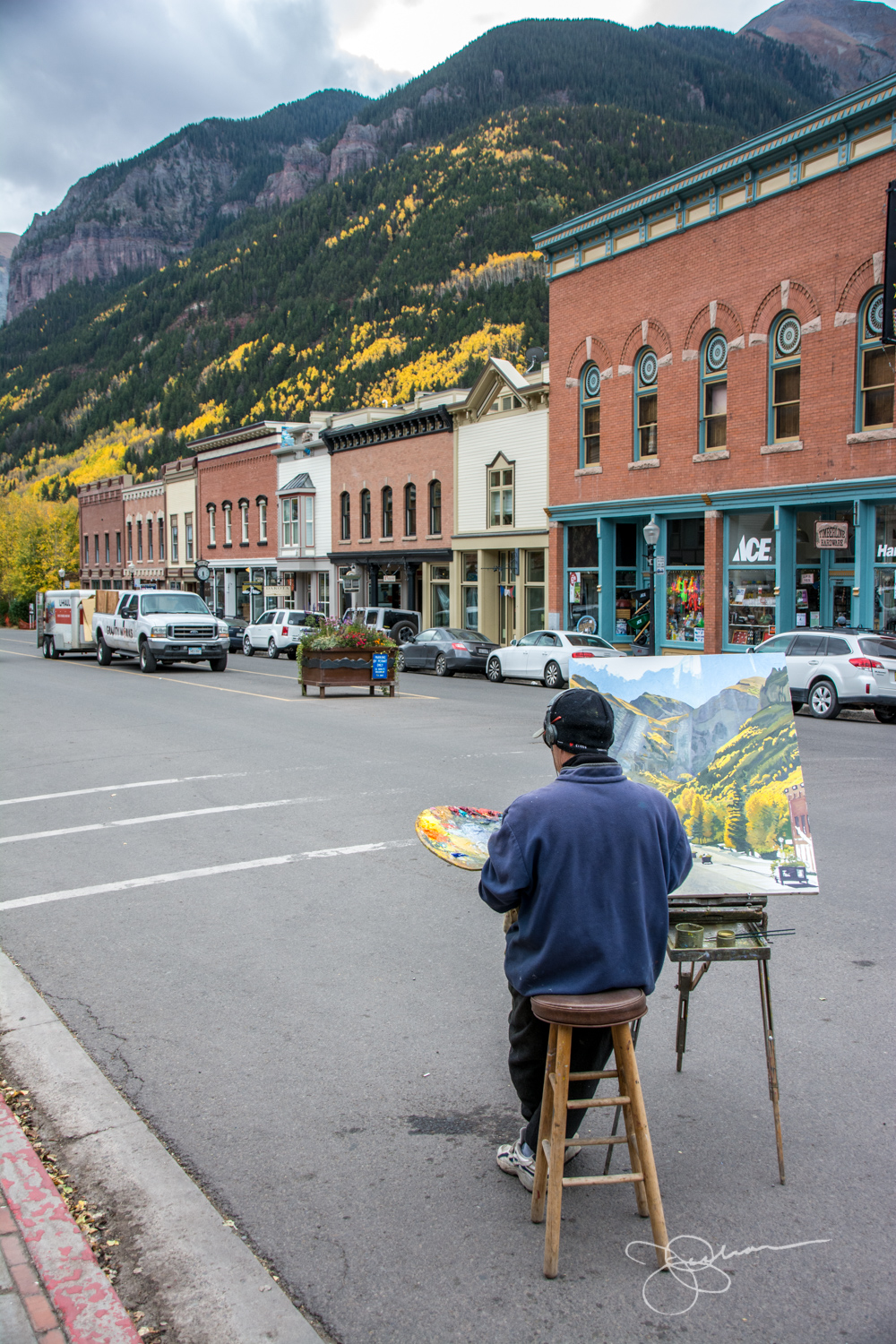 This one I like because I used to drive this as a kid. Without the flowers. This is a real man’s 4×4. In order to lock the hubs in front, you have to get out and turn the dimpled dials on the front axle. With your bare hands. 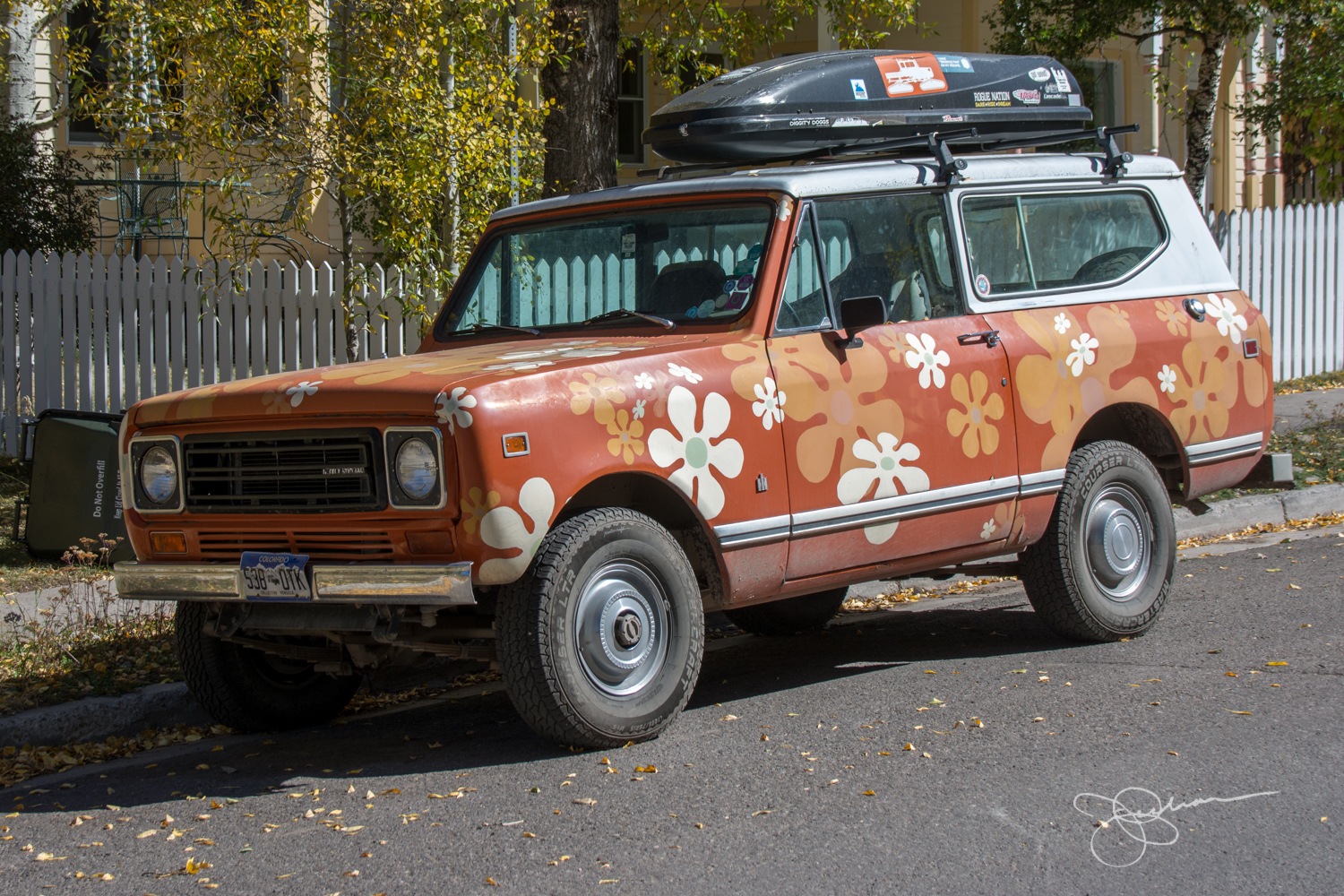 With clouds rolling in, I eventually got my “Three Barns” shot. 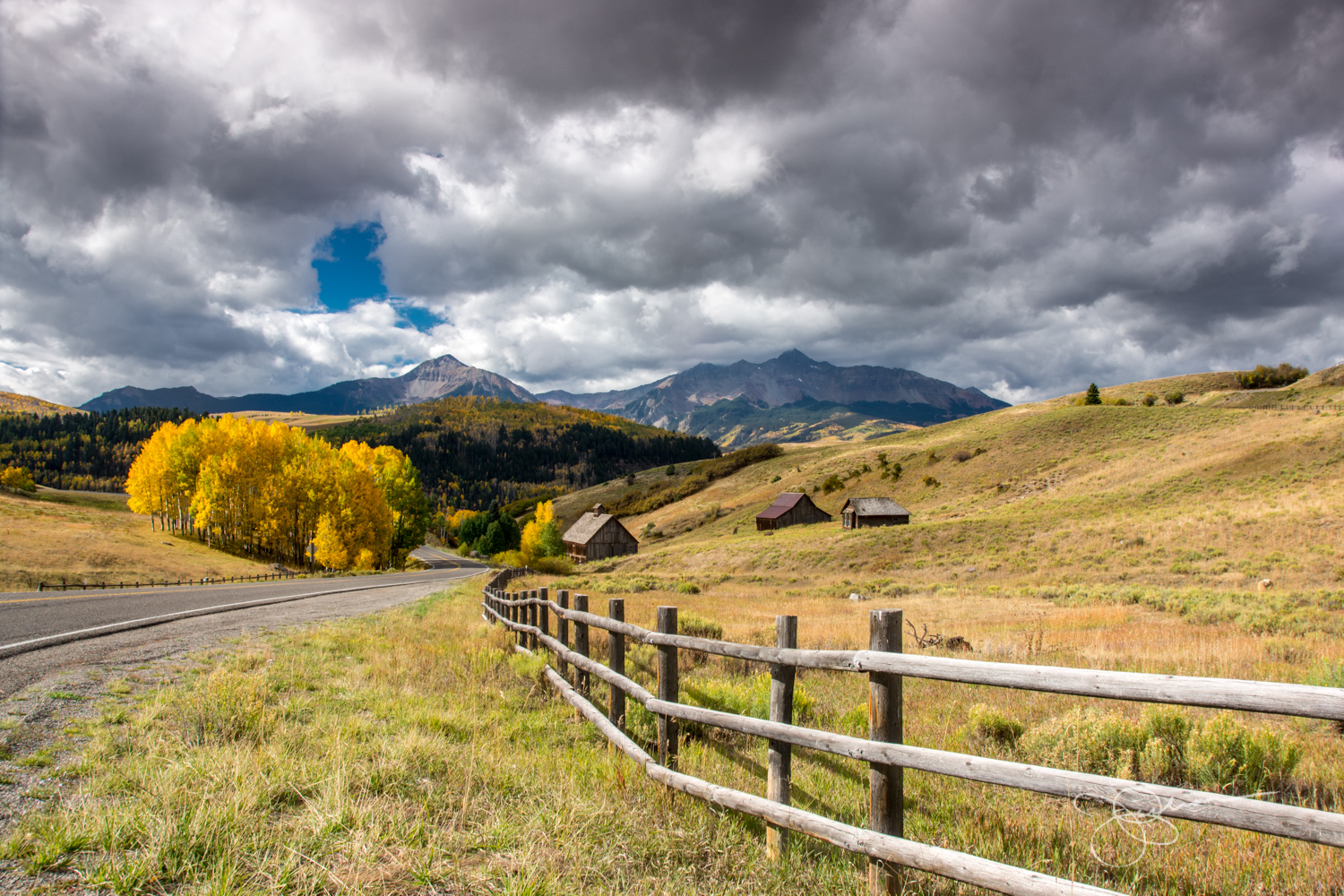 On the southern end of Last Dollar Rd.

And on the way back to Montrose, I ran into another “young” older person who made the mistake of taking his Lamborghini out of first gear.

My last photo put the period at the end of the trip. My heart yells one last time as I pull over to the side, take this photo, 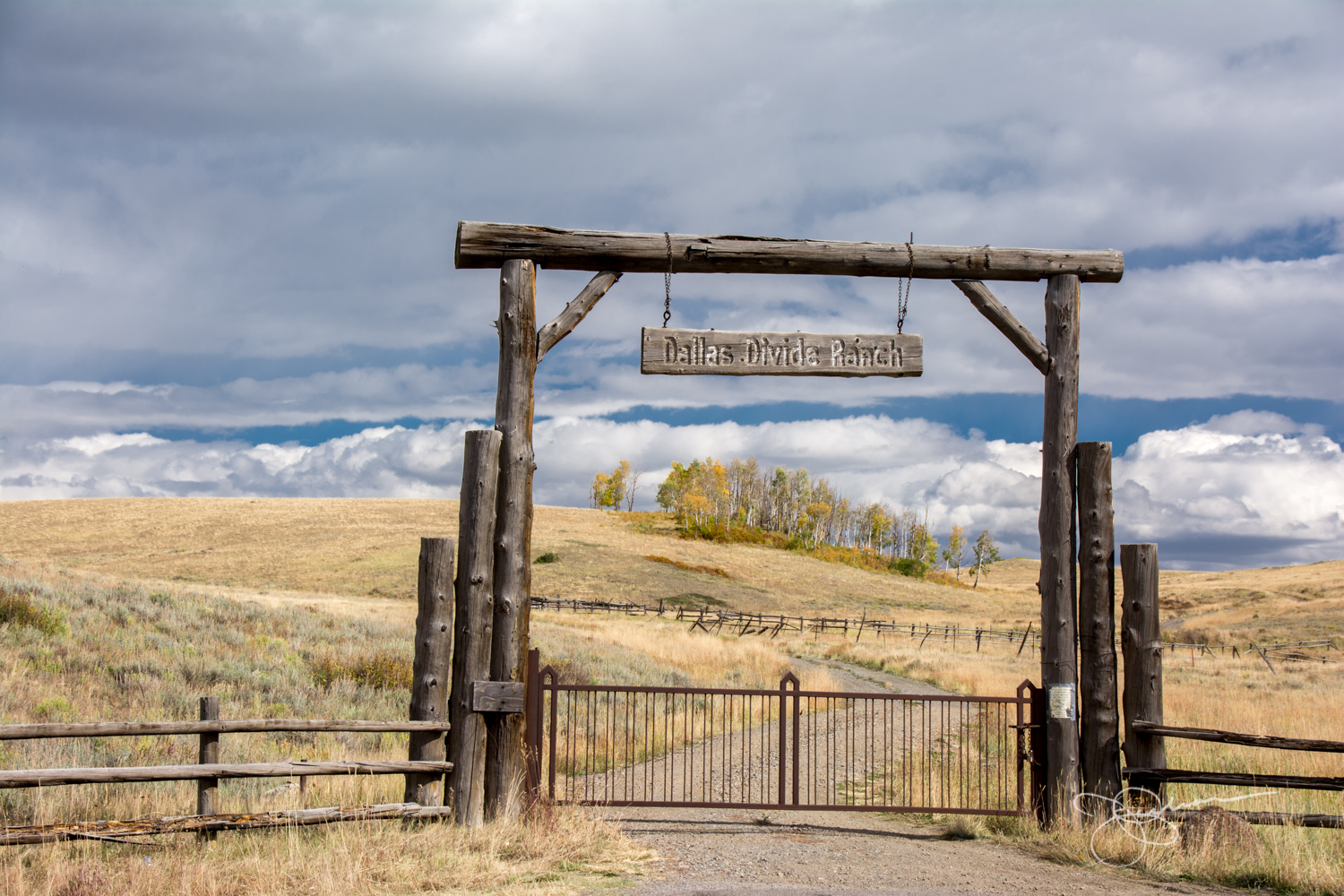 and then watch the guy in the Lamborghini lumber past in first gear with 5 cars impatiently trailing behind him.