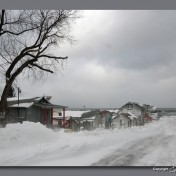 Winter found it’s way back home!  A blustery return with northwest winds gusting to over 35 mph.  Our Leelanau Road Commission plows had the roads cleared before 7am for the go to church folks, God loveum. Biscuit and I tried to get down to Van’s Beach, but the wind and corn snow drove us back.    The Leland Report/Leif Spork Snow… Read more » 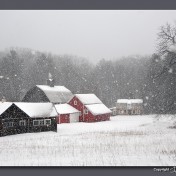 Wind from the west brought in lake effect snow.  A nice day to stay at home and watch football. A new Snow Report will be posted tomorrow. The Leland Report/Leif Spork Snow Gauge contest is closed. We had a total of 47 entries. We will report the final tally on 4/30/16! 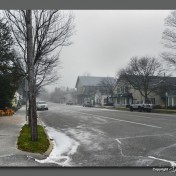 Hey out there… pack your skies and head to… maybe Telluride, cause it’s just not snowing that hard here, but it is snowing.   So far we have gotten a dusting of the white stuff, enough to have Leif put on his winter garb after yesterdays change.     Click here to enter the 2016 Snow Gauge contest! Win a custom… Read more » 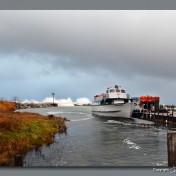 A dark beginning to the morning with a light rain and later, large snowflakes.  Around noon, peek-a-boo sunshine with billowing white clouds becoming overcast and then cloudy.  Biscuit and I arrived in Fishtown to the sound of pounding waves against the break wall.  What kind of a day is it?…  It’s an Everything kind of day.   Click here to enter… Read more » 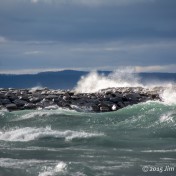 (Today’s report is from Jim) Crowded day in Leland this morning with the PJ Party and Sale going on. I spent some time on North Beach looking for my breakwall shots and finally saw the sun for the first time since we came up. Dad got his surfer shot below. Glad I brought my hand warmers.  Click here to enter the 2016 Snow… Read more » 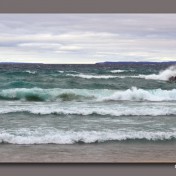 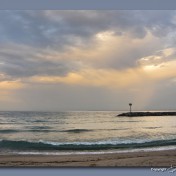 Not as nice as yesterday, but not the worst.  Another one of those “little bit of everything” days with some raindrops in the AM, sunshine at noon and overcast to mostly cloudy later.  Leelanau County is reaching peak color this weekend with temperatures in the mid fifties, sunshine Thursday thru Saturday. Possible showers Saturday PM. 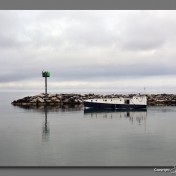 The day began in Fishtown before the clouds moved out and the sun returned, the only sounds were the chug of the tug.  Fishtown is a special place in the early morning.  The only shops open are the Cheese Shanty and Carlson’s Fish. 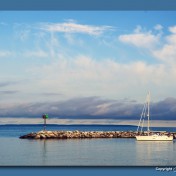 After 3 days of drizzly weather, the sun returned. 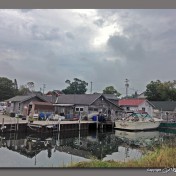 It was a very quiet and calm morning on the beach with a little drizzle in the air.  A couple of folks were looking for stones, taking advantage of the still water.  The sun did visit for a couple of minutes this afternoon, but cloudy skies and occasional drops are forecasted for the rest of the day. John Chapman… Read more »